Richard Maude, the Office of National Assessments' director-general between 2013 and 2016, said Australia needed to refresh its foreign policy strategy to take account of coronavirus, the US election and the growing influence of China. 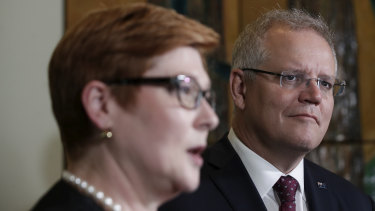 Mr Maude, who headed the development of the 2017 foreign policy white paper as a senior official in the Department of Foreign Affairs and Trade (DFAT), said the roughly $4 billion Australia spent on foreign aid annually was not enough to achieve the nation's goals in the region, including in south-east Asia.

Speaking to a podcast series to be launched on Monday by the Australian Council for International Development, he said the Abbott government’s merging of AusAID and DFAT raised a number of issues, including a lack of understanding about aid from senior DFAT officials, that had yet to be fully addressed.

Mr Maude, now the executive director of Asia Society Australia, said the government’s cuts to foreign aid in 2013 had also put the program “under an enormous amount of pressure” and it was “spread very thin these days”.

Richard Maude is a former senior diplomat and intelligence official.Credit:Unknown via Aperture

“It was suffering a number of cuts and re-prioritised stations, and whatever I might have made of that as a public servant inside the tent, I accepted then and I also accept now that you can get to give your best advice but at the end of the day, governments make decisions,” he said.

“But to the extent that one can form views about something as complex as foreign aid in two short, really tumultuous years, I'd say that I became guided by two broad principles.

“One is that poverty alleviation should still be a core goal of our international development efforts, even as we seek to apply more foreign aid to strategic goals. And secondly, as a wealthy nation, we should be spending more than $4 billion a year including in south-east Asia, not withstanding its recent development.”

There has been growing concern from security and diplomacy experts that the government’s Pacific “step-up”, designed to counter Beijing's growing influence in the region, has come at the expense of other areas in the Indo-Pacific. The government in November announced a $232 million infrastructure-boosting program for countries along the Mekong River including Cambodia, Laos and Myanmar.

Mr Maude said the government did not need to develop a new foreign policy white paper, but it should put out a major update this year along the lines of the Defence strategy update released in 2020.

“Whether you think about the challenges that China poses, economic nationalism and populism, the challenge of globalisation or the weakness of the multilateral system, they've all really continued to get worse over the years,” he said.

“On top of that, we have a pandemic and a smashed global economy … so there's a lot to think about.”

Mr Maude said another reason the 2017 strategy should be updated was that many of the key figures who presided over that process, including former prime minister Malcolm Turnbull and foreign minister Julie Bishop, had moved on.

Allan Gyngell, a former senior diplomat who headed the Office of National Assessments from 2009 to 2013, agreed the government should update the 2017 foreign policy white paper, saying the world was at a turning point with US President Donald Trump leaving the White House.

He said it was important for Prime Minister Scott Morrison and Foreign Minister Marise Payne to clearly outline their strategy for the next few years.

“This is not a government which has articulated its thoughts about the world in any particularly formal way," Mr Gyngell said.

“It would be extremely useful for them to put themselves through the discipline of working out the fundamental structure that they want Australia going through in the world over the next, say, four years."

Mr Gyngell said the Australian government should be spending more on foreign aid, saying it did not value diplomacy and soft power to the same extent as defence and intelligence agencies.

“It stems from the way we think about statecraft," he said. "We accept the need to spend money on the instruments of defence and deterrence but we think that spending money on instruments of persuasion – whether that is aid, diplomacy or soft power – that’s somehow less real in terms of the effect that it has."