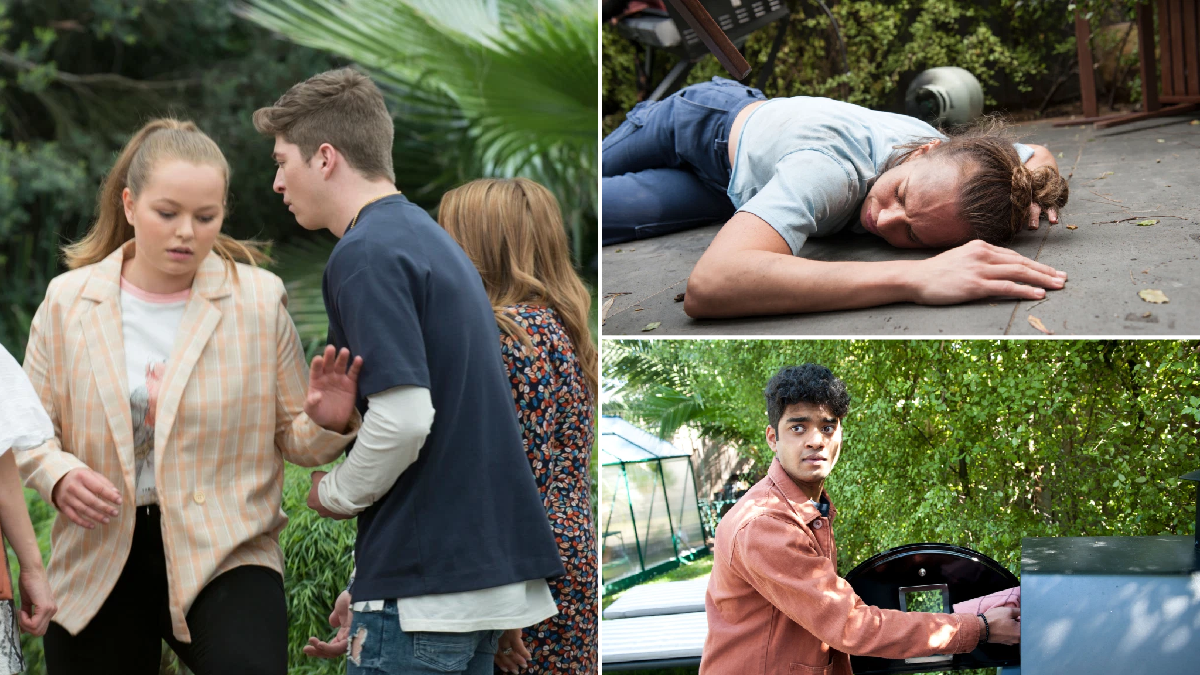 It’s a real roller coaster of a week for the Neighbours lot as there are wonderful highs of new love and serious lows with what could be a death-by-pie, and a few other loop-de-loops in between.

Hendrix (Benny Turland) is well on his way to rock bottom when traumatised Harlow (Jemma Donovan) realises she can’t see a way through this. Their love is over, and it could have serious ramifications.

But where one heart breaks another becomes whole when someone admits to their feelings and is surprised when the the other person feels the same. Is this a new little love fest?

What goes up must come crashing down with yet another broken heart when Dipi (Sharon Johal) realises she truly has lost her man for good, and her only answer is to leave.

Harlow is a saint for having put up with Hendrix for this long, but her getting kidnapped as part of his affiliations with Kane finally takes the biscuit. She’s still traumatised by the experience and Hendrix’s involvement leaves her at a loss. Terese and Paul hope she sees sense and gives him the elbow before she’s put in more danger, but is she ready to walk away? After giving herself time to think she realises that yes, yes she is. Hendrix is stunned and heartbroken to find himself single and tries to pull out all the stops in winning her back – vowing to repeat year 12. It’s a good start, but it’s not enough. What will he do without her?

Jay has feelings for Mackenzie and they’re starting to bubble up to the point he can’t keep it to himself anymore, he needs to tell her. As a shocker for him, he discovers she likes him too. It’s all too cute between the two, but their budding romance is caught short when things go crazy at home for Jay and they result in him having to leave for Sydney asap. Is it over before it’s started?

Nicolette scores a thaw in Aaron and David’s resolve as, after attending their baby’s first ultrasound, they can’t help but start to forgive her. But it’s not enough for Nic, she needs Chloe onside too. She approaches Chloe hoping for a truce, but Chloe is having none of it. She’s started to believe Pierce’s stance on Nic. But there might be a thaw on the horizon here too when Chloe claps eyes on Ricardo’s harassing messages and she realises what Nic has been going through. Can these two make up?

Toadie gets his hands on the Tram’s roo pies and gives them to Ned, who shares them with Bea with no clue how deadly these meals really are. It’s not long before Bea starts to feel dodgy, but it’s not just an upset stomach she gets from eating the poisonous mushrooms. She’s hit with pain and collapses, and on being rushed to hospital they discover her organs are shutting down one by one. Karl and David desperately try to save her, but it’s not looking good. Roxy and Kyle return home to the news, leaving them consumed with guilt. Have they killed their friend?

Amy is fighting to be included in Shane’s life in areas where she has no business being, namely his family, and this is bending Mackenzie’s nose out of joint. She thinks Amy is just a loose cannon and wants her gone, so she does a little digging into her background. Mackenzie calls Hawke Airlines and learns something pretty devastating about Amy’s past. Mackenzie has to share what she’s learned with Shane, but how will he react?

The revelation of Mackenzie’s find leaves Dipi and Amy at each other’s throats and things descend into chaos when the women go to battle – lip sync battle that is, and Dipi comes off worse. But she’s left gutted when instead of defending her, Shane sides with Amy. Realising she’s lost him for good, Dipi realises she needs to leave, she’s heading to Sydney with Jay.