So here it is, the fabled Snyder Cut. A recap, for anyone distracted by other concerns: the original shoot for Zack Snyder’s superhero epic Justice League was back in 2016, before personal tragedy led to Snyder quitting during post-production. 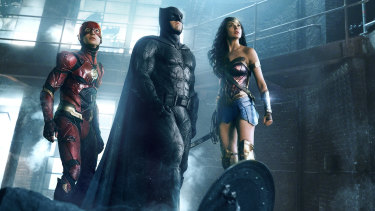 The Flash, Batman and Wonder Woman in a scene from Zack Snyder’s Justice League.

His hastily-recruited replacement was Joss Whedon, the mastermind behind two massively profitable Avengers films. Unfortunately, Whedon’s breezy style is the exact opposite of Snyder’s solemnity and the result – while not unwatchable – was the tonal mishmash anyone might have expected.

Years later an online campaign sprang up, urging that Snyder be allowed to complete the film he originally planned. Improbably, management at Warner Bros gave the go-ahead, perhaps hoping for something like a brand-new blockbuster at a bargain price.

A full account of this behind-the-scenes drama might run almost as long as the Snyder Cut itself, which clocks in at a tidy four hours (with credits). A large portion of this material is previously unseen, though only a fraction is newly shot. 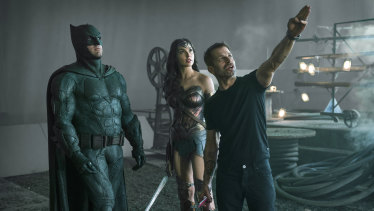 Snyder, right, with Ben Affleck as Batman and Gal Gadot as Wonder Woman on set. Credit:AP

Snyder has excised all of Whedon’s contributions – and some of them, like the occasional cutaways to a downtrodden Russian family, are not likely to be missed. But little has changed about the outline of the plot, which now seems more straightforward rather than less.

The main game is the hunt for a full set of Mother Boxes, metal cubes that bear a more-than-passing resemblance to the Marvel movies’ Infinity Stones. These have the power to transform Earth into a hellscape – or, possibly, bring Superman (Henry Cavill) back from the dead.

The hellscape option is the one favoured by Steppenwolf (Ciaran Hinds), a looming demon in gleaming serrated armour, now revealed as a proxy for his extra-terrestrial master Darkseid (Ray Porter).

The champions of humanity are Batman (Ben Affleck), otherwise known as billionaire Bruce Wayne, and the allies he recruits to his freshly formed League, a process which occupies at least two hours of the four.

Even in this super-sized package, most of the team members register much as they always did. Affleck’s middle-aged, sullen, technocratic Batman may not be the hero of anyone’s dreams, but for me remains as persuasive an interpretation of the character as any.

Gal Gadot’s poised Wonder Woman is more solemn and less lively than in her own star vehicles, though she gets to demonstrate that her superpowers include the ability to deliver boatloads of exposition with a straight face.

The Flash (Ezra Miller) is the same youthful wiseguy we met the first time round, suffering if anyone does from the absence of Whedon’s additional dialogue. The added last-minute cameo for the Joker (Jared Leto) is neither here nor there.

On the other hand, we see significantly more of the burly, sceptical Aquaman (Jason Momoa), and the tortured Cyborg (Ray Fisher), with the latter’s daddy issues especially close to centre stage.

Is the whole four hours really necessary? Not remotely. Still, Snyder and his fans have not fought in vain: this is genuinely a different film from the earlier Justice League, and a much more coherent one. 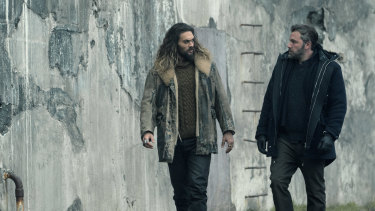 Viewers can expect to see much more of Jason Momoa, left, in the new film. Credit:Warner Bros

However you feel about Snyder’s sensibility, there’s no uncertainty about what he wants to do. Light relief has its place, but the main goal is to ramp up the big cornball moments as far as possible, rather than half-apologising for them with winking gags.

The happiest stylistic surprise is Snyder’s use of the squarish Academy aspect ratio, nowadays uncommon but a perfectly valid artistic choice. This means that the shots actually look like comic-book panels, simply but carefully composed: often two characters on a diagonal axis, one in the foreground and the other further back.

The visual pomp can verge on absurdity; so too can the matching stiffness of much of the dialogue, such as when Steppenwolf and Darkseid growl solemnly at each other about the “Anti-Life Equation”.

But all this shows that Snyder believes in his genre more than most directors of comic-book movies do. His heroes and villains are genuinely larger than life, not just regular folk who slouch and mumble like you and me.

Likewise, when he puts his action sequences into slow motion he’s aiming for something other than conventional spectacle. The characters seem to be taking part in an eternally repeated ritual, far removed from our unheroic world.