A man was forced to defend himself after he was branded a ‘stalker’ for saying he was ‘in love’ with a woman he saw on a dating app despite never having spoken to her.

Writing on UK-based forum Mumsnet, the man explained that personal reasons stopped him from contacting the woman when he initially saw her on a dating app, but he has since found her on social media in the hopes of confessing his feelings.

He said the woman is no longer using the dating app and is in a relationship, however he’s convinced that he should still make his admiration known because she isn’t married.

Many comments accused the man of being a ‘stalker’ as they criticised him for finding the woman on social media, while others encouraged him to make his desire known to the woman. 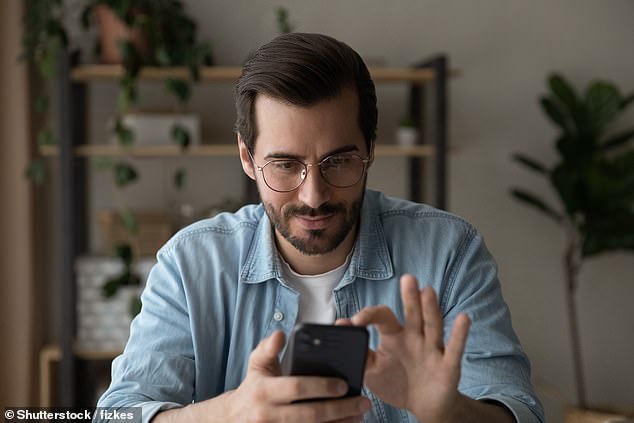 A man, who lives in the UK, sparked a debate about finding people on social media after seeing their profile on a dating app (file image) 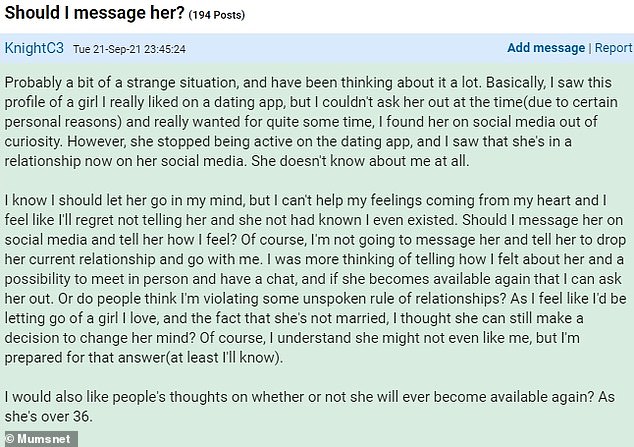 Posting on Mumsnet, the man explained he was able to find the woman on social media but is torn about confessing his feelings because she is now in a relationship

In subsequent posts he revealed he had decided against contacting the woman and admitted he didn’t appreciate she might feel threatened by his behaviour.

The initial post read: ‘I saw this profile of a girl I really liked on a dating app, but I couldn’t ask her out at the time (due to certain personal reasons) and really wanted for quite some time, I found her on social media out of curiosity.

‘However, she stopped being active on the dating app, and I saw that she’s in a relationship now on her social media. She doesn’t know about me at all.

‘I know I should let her go in my mind, but I can’t help my feelings coming from my heart and I feel like I’ll regret not telling her and she not had known I even existed.

Some Mumsnet users advised the man to contact the woman respectfully, if it hasn’t been long since she deleted her dating profile

‘I was more thinking of telling how I felt about her and a possibility to meet in person and have a chat, and if she becomes available again that I can ask her out. Or do people think I’m violating some unspoken rule of relationships?

‘As I feel like I’d be letting go of a girl I love, and the fact that she’s not married, I thought she can still make a decision to change her mind? Of course, I understand she might not even like me, but I’m prepared for that answer(at least I’ll know).’

A few responses to the post encouraged the man to contact the woman on social media, with one writing: ‘How long ago was she on the app? Like two weeks ago or two years ago? If only two weeks she may just be taking a break… if much longer leave her be.’

Another said: ‘I would day go for it but be careful with your wording, something along the lines of ‘Hi, I hope you don’t mind me getting in touch. I’m sorry I didn’t get the chance to contact you while you were on (the app) but I would like to meet up as I think we would be a really great match’, who knows, she may respond out of curiosity?’

However, others argued the man shouldn’t contact the woman and accused him of making assumptions about her based on photographs.

‘You are saying you ‘love’ this fantasy person you have created. You cannot truly love someone you don’t know. You have made up a fantasy of ‘how it will be’ when you tell her your ‘feelings’. Can you not see how unhealthy all this is? I think you need to seek counselling.’

Another said: ‘You’re stalking her and idolising a version of her you’ve invented, based on an app and her social media. She’d be wise to run fast in the opposite direction – I have a friend who inspires his reaction in others (she is gorgeous and just a shiny magnetic human that others want to be near).

‘Without fail, every partner she’s had who started out behaving as you have has physically abused her when she deviated from their imaginary idea of her. She’s now happily married to someone who was a childhood friend and loves who she actually is.

‘For yourself, I’d take a good, compassionate look at what’s causing you to hanker after an unobtainable ideal and get yourself some support with the root cause, which is likely to hurt you and quite possibly others if you don’t deal with it.’

‘It’s not okay to do this. You haven’t even spoken to this person, you don’t love her, you don’t know her. You might even want to consider therapy.’ 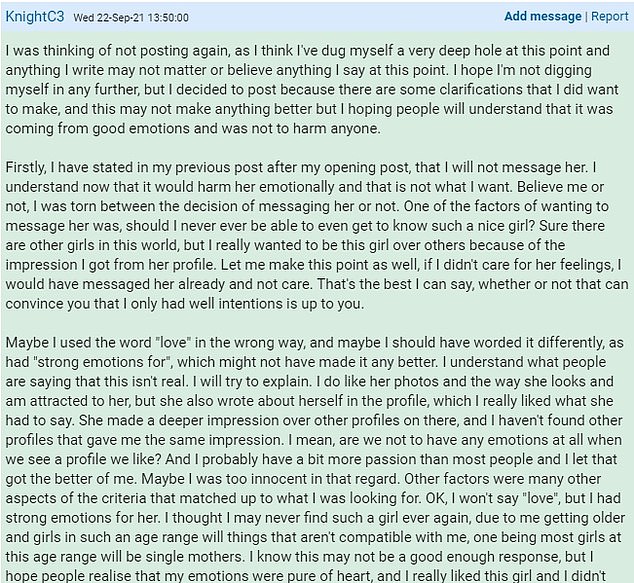 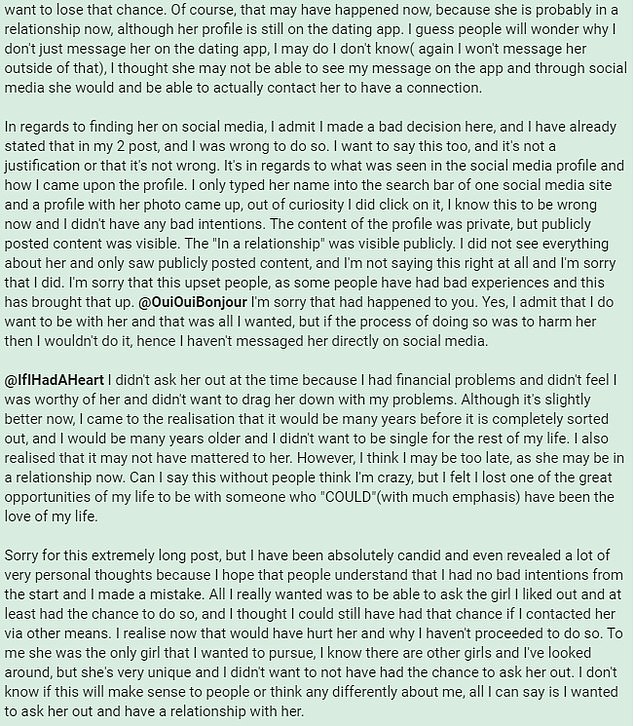 The man penned a series of lengthy follow-up messages in response to the backlash, admitting that he was wrong to look for the woman on social media