Prime Minister Scott Morrison has promoted one of his closest allies by elevating Immigration Minister Alex Hawke to federal cabinet in a small reshuffle triggered by the resignation of former industry minister Christian Porter.

Mr Hawke, a significant powerbroker in the NSW division of the Liberal Party, will keep his portfolio but enter federal cabinet amid a growing debate over the future of immigration as the country emerges from the pandemic. 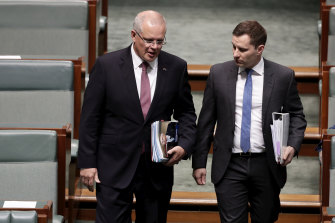 Scott Morrison with Immigration Minister Alex Hawke, who he has promoted to cabinet.Credit:Alex Ellinghausen

Mr Hawke was a key tactical adviser to Mr Morrison during the Liberal leadership spill of 2018 when the two friends, joined by fellow cabinet minister Stuart Robert, sought support to defeat Peter Dutton in the ballot to decide a successor to Malcolm Turnbull.

In a move to avoid a broader reshuffle, Mr Morrison gave the industry portfolio to Energy and Emissions Reduction Minister Angus Taylor to expand his responsibilities given both roles share the same federal department.

The changes give Mr Taylor one of the cabinet’s key roles ahead of the federal election with responsibility for climate policy, energy prices, manufacturing and the attempt to attract vaccine companies like Pfizer and Moderna to make mRNA vaccines in Australia.

Defence Industry Minister Melissa Price, who is also in cabinet, will gain some parts of the industry portfolio including science and technology to work alongside Mr Taylor.

Western Australian Liberal Ben Morton, another of Mr Morrison’s close colleagues, will rise to the ministry but not enter cabinet as Special Minister of State with a role that includes cutting red tape.

Mr Morton will also be asked to look at reform of the federation, a signal of changes to relations between Canberra and the states after the pandemic sparked the use of extraordinary powers by state and territory leaders using health orders.

Liberals regard Mr Morton as one of the key figures advising Mr Morrison with an influence far greater than his relatively junior ministerial rank. He travelled with the Prime Minister during some of the last election campaign and was a trusted ally on sensitive issues. 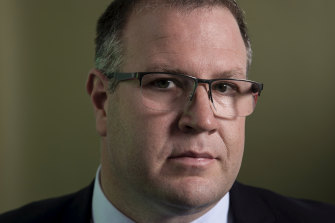 Ben Morton is regarded as one of the key figures advising Scott Morrison with influence far greater than his rank.Credit:Dominic Lorrimer

Born in Gosford in NSW, Mr Morton was raised in Wyong and worked as a bus driver in Queanbeyan before joining the Howard government as an adviser. He moved to Perth and became state director of the Liberal Party in 2008 before entering Parliament as the member for Tangney in 2016.

Victorian Liberal Tim Wilson, an advocate for action on climate change, will enter the ranks of assistant ministers in the energy portfolio to work with Mr Taylor. Mr Wilson was a Human Rights Commissioner from February 2014 until February 2016 before entering Parliament as the member for Goldstein.

Labor leader Anthony Albanese said the reshuffle highlighted the “failure of integrity” in the government because the departure of Mr Porter demonstrated the need for a federal anti-corruption commission like those that exist in the states.

Mr Albanese said the resignation of NSW Premier Gladys Berejiklian, who is under investigation by the state’s Independent Commission Against Corruption, also showed the need for a federal agency to crack down on wrongdoing.

While Mr Porter quit his cabinet position because he could or would not name the donors behind a secret trust that funded some of his legal expenses in a defamation claim against the ABC, he remains in Parliament.

“It is simply untenable for Mr Porter to continue to sit in the Parliament, having unknown amounts from unknown donors given to him to conduct a private legal matter,” Mr Albanese said.

There are limited sanctions in Parliament to force a backbencher to reveal donors under rules set by the Parliament as a whole rather than the government alone. Parliament has not expelled a member since it applied the sanction on Hugh Mahon in November 1920 on claims he was disloyal to the British Empire. Both chambers of Parliament gave up this power to expel a member in the Parliamentary Privileges Act 1987.

Meanwhile, the Liberal and Nationals in the Senate voted to nominate their Western Australian colleague, Slade Brockman, as the President of the Senate to replace incumbent Scott Ryan when he departs within weeks.

The nomination is yet to go to a vote by the Senate and the Coalition will need the support of some crossbenchers in order to prevail.