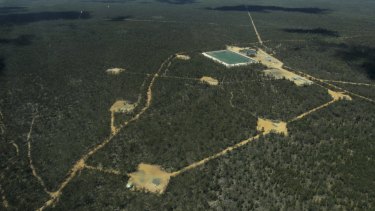 "Farmers in our region are already being forced to live with worsening droughts, devastating heat waves and extreme weather," said local farmer and Mullaley Gas and Pipeline Accord member Scott McCalman.

"The approval of damaging projects like this that will fuel global warming even further just means more hardship for rural communities."

The appeal also claims the state's major projects approval agency, the Independent Planning Commission, wrongly found that it could not address the greenhouse gases generated when third parties, like power stations, burn gas for energy – which are known as scope 3 emissions.

Environmental Defenders Office director of legal strategy Elaine Johnson said the commission should have followed the approach taken by the Land and Environment Court when it rejected the application for the Rocky Hill mine in Gloucester, which assessed the impacts of the scope 3 emissions on the environment and people of NSW.

The commission said scope 3 emissions were outside Santos' control and only required that direct emissions from the gas field – scope 1 and 2 – be offset.

Opening up gas supply in the state would enable lower emissions power generation when compared to coal plants, the commission's approval findings said.

It also found construction of a gas field was consistent with Australia's commitment to international climate treaties and NSW's deal with the federal government to deliver 70 petajoules of new gas supply in return for $3 billion in infrastructure funding.

"The [commission] notes the expected emissions advantage of CSG compared to coal for electricity generation and the government's intent through the Commonwealth's endorsement of the Paris Agreement and the NSW Gas Plan and NSW Energy Package to increase the supply of gas in NSW," the findings said.

NSW Planning Minister Rob Stokes issued a statement of expectations in May, following its rejection of several coal projects including at Bylong and Rocky Hill, which said one of the commission's key objectives was to follow government policy.

Ms Johnson said government policy did not alter the commission's legal responsibilities and it was wrong to compare the emissions from gas to coal fired power.

"Our client said there was no evidence before the IPC that the Narrabri project would displace coal in the generation of electricity. It's a 25 year project and coal fired power is set to decline over that time anyway," Ms Johnson said.

The legal challenge will also argue that the commission failed to consider the environmental impacts of a pipeline, which will be built by a third party to supply gas from Narrabri to its customers.