RICHARD LITTLEJOHN: I don’t dispute that Covid-19 is a serious health crisis, but these restrictions are two cups of tea short of a picnic!

Think yourselves lucky I’m here today. I could have been up before North London magistrates, charged with resisting arrest, if not attempted murder.

At the weekend, having been confined to barracks since September recovering from a gammy leg, I took my physio’s advice and attempted a walk in the local park.

My first faltering steps on clambering out of the car made Douglas Bader look like Usain Bolt. Gradually, though, I found my feet, so to speak. Bursting through the pain barrier, I finally hit the wall after about 200 yards and collapsed on to a convenient wooden bench. 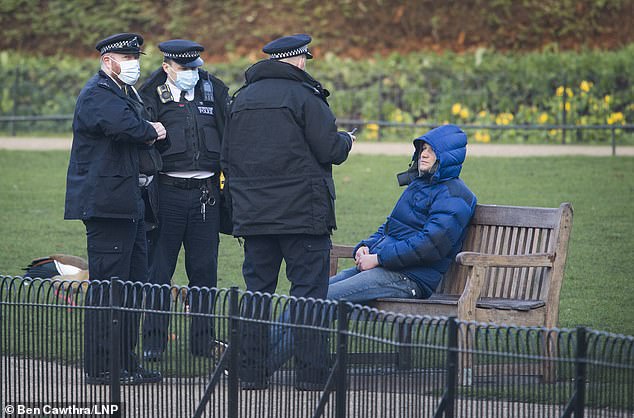 Unlike the last lockdown, the benches hadn’t yet been cordoned off with hideous CSI-style black and yellow crime scene tape. Pictured: Three police officers wearing face masks question a man sitting on a bench in St James’s Park, London

Unlike the last lockdown, the benches hadn’t yet been cordoned off with hideous CSI-style black and yellow crime scene tape.

Fortunately, there weren’t any coppers around, otherwise I could have had my collar felt. Sitting on a park bench — and chatting to a friend, Heaven forfend — is now Verboten, by order of the Government.

There have already been several reports of people on benches being moved on by police, including a hardy Scotsman wearing a kilt in London’s Hyde Park. Sitting down doesn’t count as ‘exercise’ within the meaning of the Act, even if you’re just taking a breather. Refusal to budge leaves you liable to arrest.

The cops are also demanding to know your name and address, where you think you’re going and how long you’ve been out. You are only supposed to leave your home for exercise once a day and there are ominous predictions that the limit could soon be reduced to just once a week. 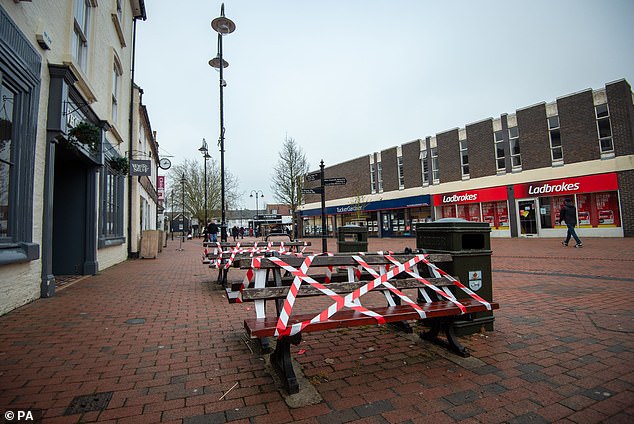 Sitting on a park bench — and chatting to a friend, Heaven forfend — is now Verboten, by order of the Government. Benches are taped off in Ely, Cambridgeshire

The most notorious incident so far came on Bournemouth sea front where a woman sitting on a bench was arrested and handcuffed. Her ‘crime’ was allegedly leaving her house for a second time that day.

Police say the confrontation was stage-managed and she wanted to get nicked. The woman is apparently well-known in the area as a paranoid anti-lockdown activist who thinks the coronavirus is no worse than ‘the sniffles’.

So what? She might be horribly misguided, but if the Old Bill went round arresting every madwoman in Britain the jails would soon be more overcrowded than the Black Hole of Calcutta.

Couldn’t they just have given her a pat on the head and left her alone? What harm was she doing? All this heavy-handed arrest succeeded in achieving was proving that just because you’re paranoid, it doesn’t mean they’re not out to get you. 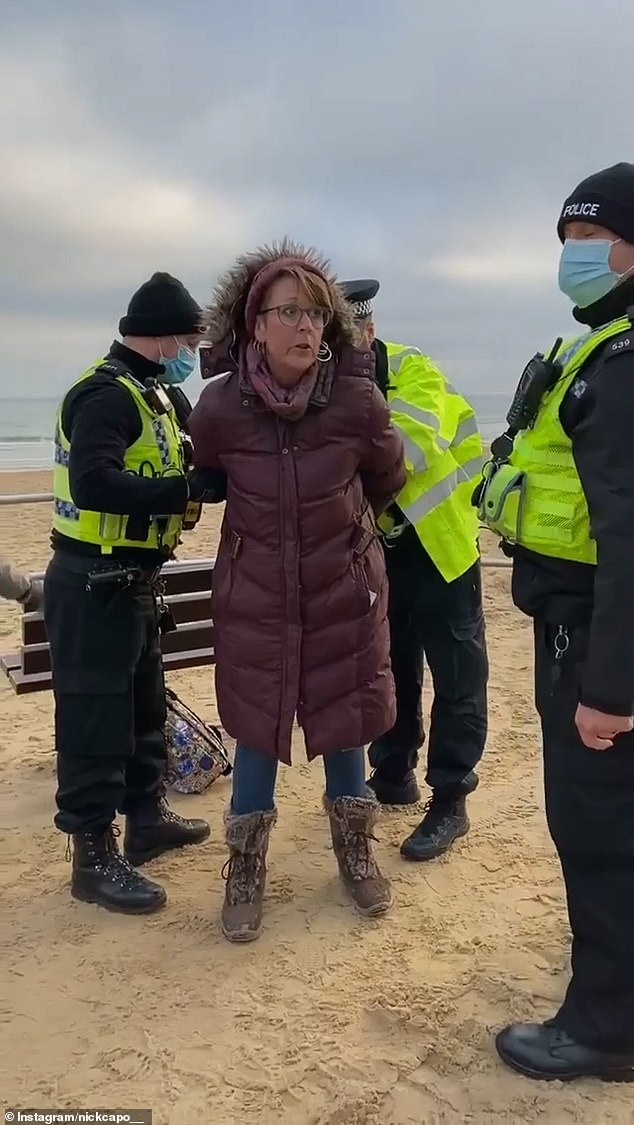 She may be utterly wrong in thinking corona is no more dangerous than the sniffles, but she’s in good company. When Jeremy Clarkson tested positive for Covid over Christmas he told readers of the Sunday Times that he feared he was going to ‘die in a plastic tent’. Now he says it was like having a ‘small cold’.

(Incidentally, I see doctors have identified a Brazilian strain. That could be good news for hirsute ladies unable to visit the beauty salon for the next few months.)

Sorry, where was I?

Oh, yes. The most outrageous abuse of police power this lockdown has come, inevitably, from our old friends at Derbyshire Police, last seen sending up drones to spy on dog walkers in the Peak District. They haven’t yet got round to fixing machine guns on their drones, as I suggested on Friday, but they did manage to nick two attractive young women out for a walk by a reservoir. 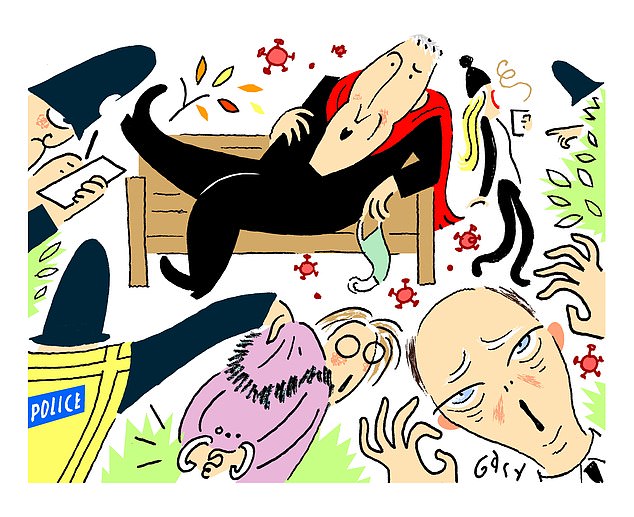 My problem is that because politicians and the ‘science’ have cried wolf so often, I don’t trust anything they say any more

The women had driven five miles in separate cars to meet up. Although they maintain they kept a safe social distance, they were surrounded by police, questioned and fined £200 each.

Officers claimed the two cups of tea they were carrying constituted a ‘picnic’ and were therefore in breach of lockdown regulations.

There’s another one I don’t know whether to file under Mind How You Go or You Couldn’t Make It Up. The women have certainly been milking their five minutes of fame, apparently recreating their ordeal for a local freelance photographer, who sold the pictures to the newspapers.

Their fines have since been rescinded, but that doesn’t excuse Derbyshire Plod, who have demonstrated yet again that if you give anyone any authority, especially if it comes with a hi-viz jacket, they will always, always abuse it.

The cops could use their common sense, but they’re not entirely to blame. They are only interpreting the knee-jerk, incoherent, inconsistent, backside-covering panic measures spewing out of central government.

For the record, I don’t dispute that this is a serious health crisis, with bursting-at-the-seams hospitals and a rising death toll. Nor do I go along with the conspiracy theorists, who claim crazily that coronavirus is a hoax.

My problem is that because politicians and the ‘science’ have cried wolf so often, I don’t trust anything they say any more.

They have only one policy, which has failed time and again to prevent the spread of the virus. That’s to bamboozle us with dubious statistics and scare us to death.

And then, when Plan A goes belly up, they seek to blame us for not obeying their confusing rules to the letter. There is no Plan B. Never has been.

The cadaverous Chris Whitty, one of the Two Ronnies of Doom, was at it again yesterday, issuing another blood-curdling prediction of tens of thousands more deaths. He may be right. Who knows? Ever since March, Whitty has been warning that WE’RE ALL GOING TO DIE!

It’s the monomania that appals me — the notion that Covid is the only disease which matters. There’s no sense of proportion, or even humanity when it comes to those suffering from other life-threatening conditions.

Where are the graphs showing how many people have died because they have been denied scheduled treatment for everything from cancer to heart disease?

American opponents of nationalised medicine who say it will lead to NHS-style ‘death panels’ are routinely accused of scaremongering. But how else should we describe any committee that decides to ration life-saving operations, effectively choosing who should live and who should die, if not a ‘death panel’.

Somehow, under a nominally Conservative Government, we’ve ended up in a situation where the people are expected to protect the State, not vice versa.

Yet even to raise these questions is to invite slanderous accusations of Covid ‘denial’, bordering on treason. Instead, we are supposed to bow down in supplication before Our Amazing NHS.

No one disputes the outstanding work being done by frazzled doctors, nurses, ambulance drivers and ancillary staff. But does anyone seriously believe the bloated NHS bureaucracy has played a blinder?

That famous sombrero refuses to stay squashed. It keeps springing back into shape, no matter how many lockdowns we are forced to endure.

Ministers are now pinning their hopes on the various vaccines to supply their Get Out Of Jail Free card. They have always had their focus on avoiding blame come the inevitable public inquiry.

Far easier to send in the heavy mob and blame us — the irresponsible general public — for spreading the disease.

Even sitting innocently on a park bench is now considered the equivalent of setting off a dirty bomb in a crowded theatre.

We now live in a country where you can be fined £200, handcuffed and arrested for sitting on a park bench or walking round a reservoir. This is madness.

Whoever came up with the latest lockdown rules must be two cups of tea short of a picnic.

Frankly, if a copper had asked me for my details and ordered me to move on at the weekend, I’d have been sorely tempted to tell him to go forth and multiply.

I speak as someone who, like most of you, has done my best to obey the rules up until now in the hope that better days are coming.

Since September I’ve had little option but to Stay Home, Save Lives etc. But now my gammy leg is on the mend, I plan to make the most of my local park, lockdown or no lockdown.

So if I’m not here on Friday, you’ll know I’ve been nicked.