Home » Lifestyle » RICHARD LITTLEJOHN: One in 50 prisoners identifying as transgender?

RICHARD LITTLEJOHN: One in 50 prisoners identifying as transgender? It’s Gypsy Rose Fletcher to you, Mr McKay…

One in 50 male prisoners in Britain’s jails is self-identifying as transgender. That figure rises to one in ten among members of the ‘travelling community’.

The authorities believe the majority are only pretending to be ‘trans’ so they can obtain extra perks such as single cells and showers.

Since they are almost exclusively men identifying as women, they can put in for a transfer to an all-female jail. Some prisons have established separate transgender wings to segregate them from other inmates.

One in 50 male prisoners in Britain’s jails is self-identifying as transgender. That figure rises to one in ten among members of the ‘travelling community’, writes Richard Littlejohn

But what about the rights of women who were born women and still identify as women, yet are forced to share with men who identify as female, even though they are in possession of a full set of wedding tackle? It’s all a bit of a minefield. Confused? You’re supposed to be.

One transgender prisoner, who was born male but identified as a woman, had to be moved to a special secure unit after sexually assaulting two female inmates while on remand in a women’s jail.

Of course, there are genuine cases and these are quite rightly treated sympathetically. But the Prison Officers’ Association is convinced many are simply playing the system, which is wide open to abuse. Especially as the 1,500 prisoners claiming to be trans is more than ten times previous estimates and at least four times the number in the general population.

The figure which really raises eyebrows is the claim that 10 per cent of all ‘travellers’ behind bars are trans. 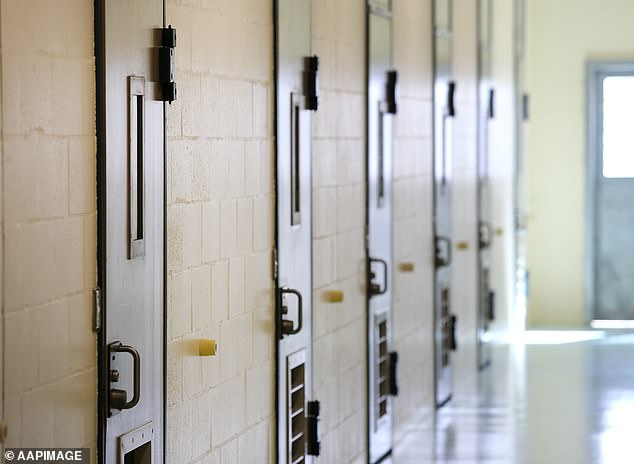 The authorities believe the majority are only pretending to be ‘trans’ so they can obtain extra perks such as single cells and showers, writes Richard Littlejohn

Sorry, I find that hard to believe. I don’t dispute that there may be a minuscule number of travellers so inclined. But when was the last time a Danny La Rue lookalike knocked on your front door and offered to Tarmac your drive, sor?

This smacks of the increasing trend among some prisoners to claim they have converted to Islam in order to obtain privileges such as special ‘culturally appropriate’ menus.

Elsewhere, the prison service has more pressing problems, including the proliferation of new drugs such as Spice — which turns users into zombies.

And at HMP Moorland, in Yorkshire, it has been revealed that prisoners have been turning free fruit, handed out as part of a ‘healthy eating’ initiative, into illicit booze by fermenting it in their cells.

The Guardian recently reviewed a book on surviving prison, written by a former inmate, which gives tips on everything from making your own salad dressing behind bars to the advantages of becoming ‘gay for the stay’.

It includes a contribution, not for the faint-hearted, from the world’s longest-serving transgender inmate, Sarah Jane Baker, who — and I quote — ‘removed her testicles with a prison issued razor blade’. (There’s another one of those sentences I thought I’d never read, let alone write.)

To investigate further the impact of these new developments, it’s time once again to cross to Slade Prison, where Norman Stanley Fletcher is in his cell polishing a crystal ball. Enter Mr Mackay . . .

Oh, there you are, Mr Mackay. I thought I heard your hobnail daisies approaching down the landing.

What are you wearing, Fletcher? Why aren’t you in prison uniform?

I beg your pardon. These are traditional garments as worn by female members of the travelling community.

Travelling community? I can’t see you in a caravan, Fletcher. I thought you lived in Muswell Hill, when you’re not in jail.

We used to keep a caravan at Frinton, before I got nicked for the third time. And, anyway, I’ve got fairground ancestry. My great-uncle Joe was proper Romany, on his mother’s side. Ran the dodgems on Hampstead Heath every Bank Holiday. His missus did a nice line in lucky heather at the old Alexandra Palace racecourse.

That still doesn’t explain why you’re wearing a floral dress, red bandana and earrings big enough to accommodate a large parrot. Or what you’re doing with a crystal ball.

Well, I’ve not only rediscovered my Romany roots, I’m redefining as female. It’s Gypsy Rose Fletcher from now on.

I beg your pardon?

There’s a lot of us transgender travellers about, Mr Mackay. One in ten, as it happens. Cross my palm with silver and I’ll tell your fortune?

You are going to meet a tall dark stranger.

I just have. I bumped into McLaren on the landing. Come to think of it, he was acting a bit strange. Kissed me on the cheek.

He would, wouldn’t he? He’s decided to be ‘gay for the stay’ —unlike Lukewarm, who was gay when he got here.

Why would McLaren want to do that?

He’s hoping to swing a transfer on compassionate grounds to Barlinnie. They’re spending £100 million tarting it up, turning it into what’s being described as a state-of-the-art budget hotel. McLaren reckons it might be more gay-friendly than Slade.

He should be so lucky. My brother works at the Bar-L and no one has ever described him as gay-friendly.

No one has ever described him as friendly, neither, Mr Mackay. Runs in the family.

Sorry, Mr Mackay. Can I offer you a drink? Pass the punchbowl.

Yes, Mr Mackay. You know them bags of fruit they’re giving away as part of the healthy eating wossname, they ferment up a treat if you leave ’em on the radiator long enough. Bit of anti-freeze helps, too, if you can lay your hands on it. Beats that moonshine Genial Harry Grout has been knocking out all these years.

That’s against regulations. I shall have to report you to the governor.

Steady on, Mr Mackay. Where does it say you can’t leave fruit to ferment? Smoothies are all the rage these days. Part of your five-a-day.

Oh, go on then. Just a small one. Where’s Godber?

Nipped out to get some spice.

I’m not having that filthy Spice drug in my prison, Fletcher. Turns people into zombies.

So does that fruit punch if you drink enough of it. But you’ve got it all wrong. He’s not getting ‘Spice’, he’s getting spice — turmeric, paprika, stuff like that.

Didn’t anyone tell you? Young Lennie — or Abu al-Brummie, as he now calls himself — has converted to Islam and he’s on culturally appropriate curry duty in the kitchens all this week. Mutton Madras tonight, real kick to it, not like the lukewarm rice pudden we usually get given. For Sunday dinner he’s knocking up a nice hedgehog vindaloo, for all the transgender travellers.

Speaking of Lukewarm, I haven’t seen him lately.

No, you could say he’s indisposed. In the sick bay. Bit of a mishap with a razor blade. Best not to ask. Let’s put it this way — he’s now identifying as a woman and has applied for a transfer to the Luton Girls’ Choir.