Erika Jayne looking to date a ‘guy with money’

Jayne’s harsh words came as she and Stracke rehashed their fight at Kathy Hilton’s dinner from this season.

As viewers will recall, the two butted heads after Stracke asserted that Jayne lied while telling stories about her estranged husband, Tom Girardi, with whom she is involved in an alleged embezzlement scandal.

“That you could not understand the position I’m in and you kept pushing and pushing and worrying about yourself,” Jayne continued, explaining why she became angry with Stracke.

“And that’s not what needed to happen.”

Stracke admitted that she was worried about herself and how being associated with Jayne might damage her reputation. But the boutique owner said that she was also concerned about the orphans, widows, burn victims and more whose settlement money was allegedly stolen by Girardi, 82, to appease his and Jayne’s expensive taste.

“I wasn’t seeing you worried about the victims at all,” Stracke said, which seemed to infuriate Jayne.

“You don’t know that. You’re assuming that,” the part-time pop singer retorted. “What would I have needed to do?”

Jayne then reiterated to Stracke that she despises being called a “liar” and told her fellow Georgia native that she “shouldn’t jump to conclusions.”

Elsewhere, Stracke questioned Jayne for “pretending” to be her friend during a group trip to Del Mar, Calif.

“I actually thought that you were being sincere. And you know what that is? Lying,” Stracke said.

Without missing a beat, Jayne shot back, “No, that’s actually just playing your ass.” 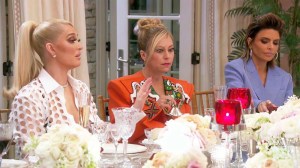 Jayne has been accused of funneling $25 million from Girardi’s now-defunct law firm, Girardi and Keese, to bankroll an American Express credit card bill, a glam squad and more charges for her LLC, EJ Global, according to court documents obtained by Page Six. (She vehemently denied these allegations during the reunion.)

Jayne filed for divorce from Girardi — who now lives in an assisted living facility and is under a conservatorship overseen by his brother, Robert — in November 2020. She was later accused of using the filing as a “sham attempt” to protect their assets from Girardi’s alleged victims who sought to collect debts.

Last month, Stracke exclusively told Page Six that having a front-row seat to her adversary’s legal miseries while filming “RHOBH” has “inspired” her to pursue law school.