Sheena Watt has spent the past 15 years breaking down barriers that prevented Aboriginal people from fully participating in the Labor Party.

Next week, she will break the glass ceiling and make history by becoming Labor's first female Aboriginal MP in the Victorian Parliament. 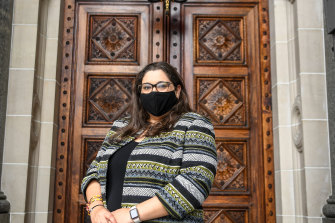 "I've spent my entire time focusing on breaking down barriers inside the party … and having the voices of Aboriginal people heard," Ms Watt said.

"This work needs to continue. It's something that will continue to be a priority for me as an MP. I think about the Aboriginal activists in the Labor Party who've reached out to me over the past few days and showed me so much support."

Brothers Cyril and David Kennedy were Labor's first Aboriginal MPs in the Victorian Parliament, in the late 1970s and early '80s.

An emotional Ms Watt called her mother, who she says is her biggest inspiration, as soon as the formal processes had ended.

And although coronavirus restrictions will prevent her younger sister from being in Parliament when she is sworn in, Ms Watt says: "I'll have my mum with me and that's truly everything."

Ms Watt recalls a tough life growing up. She was born in Melbourne and grew up in the northern suburbs, but her family was forced to move house frequently.

When she was aged 12, Ms Watt and her sister stepped up to help their mother look after their father, who had been diagnosed with a disability and needed full-time care.

"That meant secure housing was tough to come by and we worked really hard during those years," she says.

"It shaped me very much. It's something that's really driven me the last little while and I've been thinking about the huge burden on carers during COVID.

"The truth is, for me representation matters and it's not just about cultural diversity, but diversity of experience. I've been a carer, had some adversity, hardship and disadvantage in my life. Having members of Parliament who have had that lived experience is very important."

Ms Watt was most recently the executive manager of Aboriginal policy and programs at AFL SportsReady and has previously worked at the Stroke Foundation and the Victorian Aboriginal Community Controlled Health Organisation.

As an MP, she plans to focus on youth unemployment, as well as primary and preventative healthcare, and tackle unemployment in Aboriginal communities.

Ms Mikakos announced her shock resignation from cabinet and Parliament almost a fortnight ago, after Premier Daniel Andrews gave evidence at the hotel quarantine inquiry that he considered Ms Mikakos "accountable" for the bungled program that unleashed a second wave of the COVID-19 pandemic.

Mr Andrews said: "Sheena was an outstanding candidate and will make an outstanding MP. I look forward to working with her to build a stronger, fairer Victoria".