Red-y for her close up! Queen Letizia of Spain stuns in a recycled crimson suit as she visits the Cervantes Institute in Los Angeles

Christmas is just around the corner, and if her latest sartorial effort is anything to go by, Queen Letizia of Spain is getting into the holiday spirit.

The Spanish royal, 50, who is on a two-day visit to Los Angeles, donned a crimson suit from the Madrid-based designer Roberto Torretta to open the city’s first Cervantes Institute yesterday night.

The festive look saw her wear red from head-to-toe in a look that wouldn’t feel out of place in a holiday movie.

This week’s trip to the City of Angels marks Letizia’s second trip to the US this year, having flown to New York on September 19 right on the heels of Queen Elizabeth’s funeral to attend the UN. 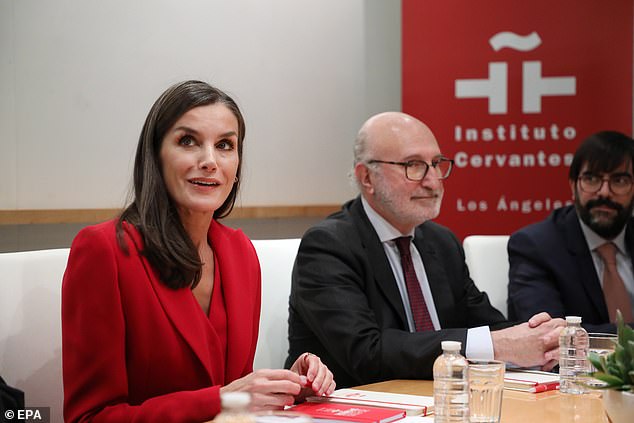 The Spanish royal, 50, who is on a two-day visit to Los Angeles, donned a crimson suit from the Madrid-based designer Roberto Torretta to open the city’s first Cervantes Institute yesterday night

The mother-of-two stood out from the crown in her impeccable crimson number, which saw her pair the red trousers with a matching blazer and shirt.

While it is warmer in Los Angeles than in most other city, the Spanish royal wrap up in a red coat which she more on her shoulders like a cape.

The suit is from Torretta’s 2017-2018 Autumn collection and has been a staple of Letizia’s wardrobe from the first time she’s worn it.

The royal asserted her title as the Queen of style by keeping the rest of the look simple to let her colour bloc outfit do the talking. 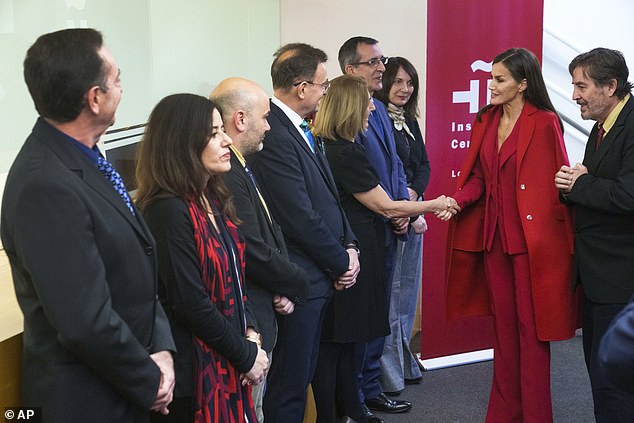 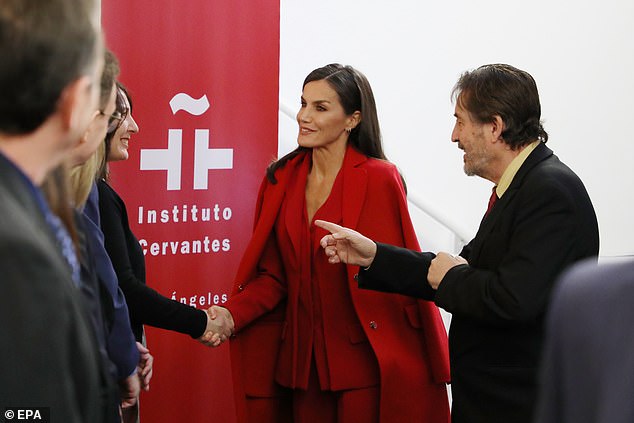 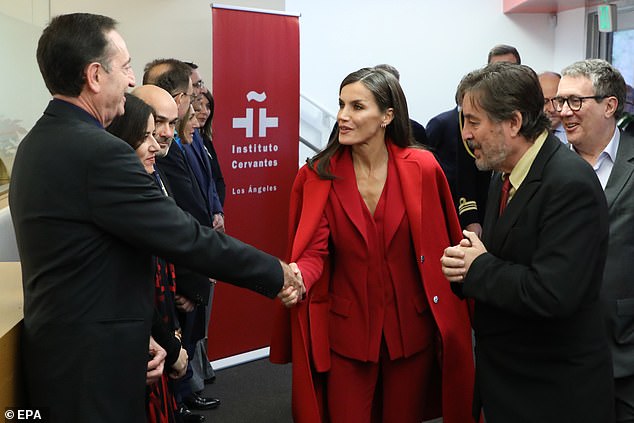 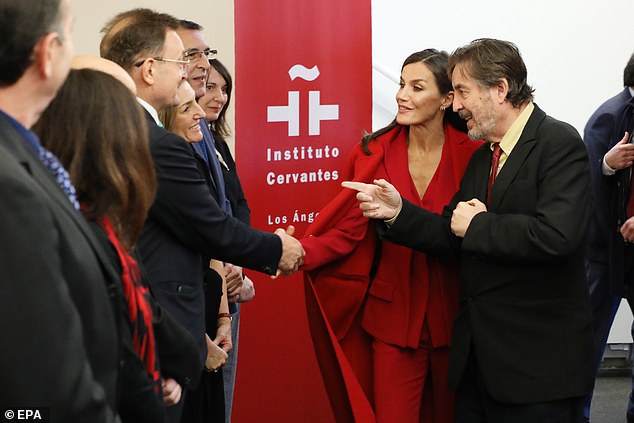 She sported the suit with a matching pair of velvet stilettos and a leather clutch bag, also in red.

She donned little jewellery, apart from a discreet pair of earrings made of three small golden hoops and her beloved Karen Hallam circle ring, which she regularly wears.

For her US visit, the Spanish royal donned a sleek straight blow-dry with her silky locks as lustrous as ever.

Letizia also sported her trusted day makeup for the occasion, with her regulation smokey eyes and sculpted brow, and just a dash of bronzer to add a sun-kissed touch to her glowing skin. 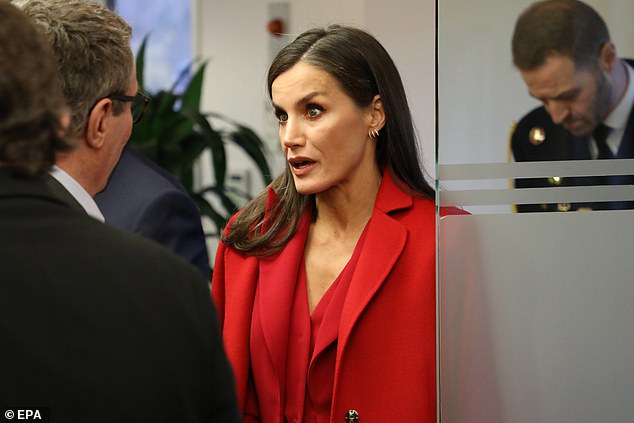 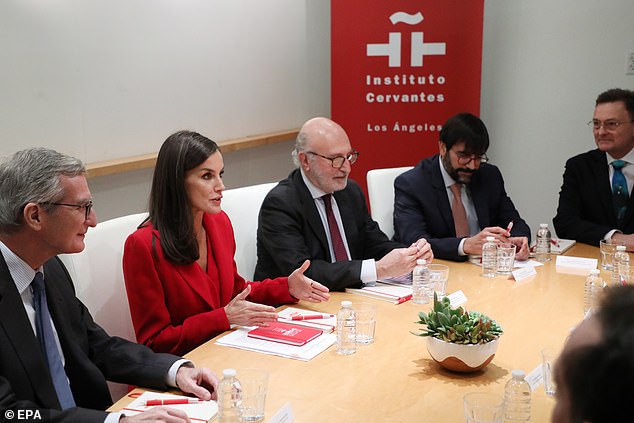 After being introduced to the team, Letizia sat down to chair the Los Angeles’ first meeting with the other bureau heads 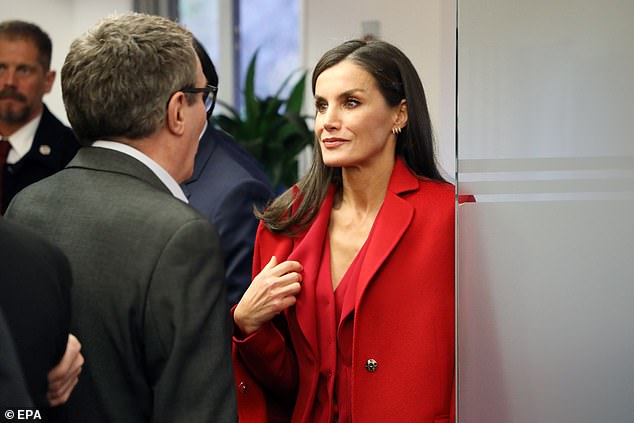 The Spanish royal styed her hair in a lustrous straight blow-dry and wore little jewellery, apart from a pair of gold earrings and her favourite ring

After being introduced to the major players at the new Los Angeles Cervantes Institute, the mother-of-two sat down to chair the institution’s first LA meeting.

With her husband King Felipe VI’s being the Institute’s honourary president, Letizia has always been deeply involved with its mission statement.

The organisation, which was created in 1991 and is in its 31st year, aims to promote the Spanish culture and language throughout the world.

In recent years, Letizia has opened several centres around the world, including in South America.

In the US alone, there are institutes in New York, Albuquerque, El Paso, Seattle, and Chicago.

If you enjoyed this story…

And Violet delights! Queen Maxima stuns in head-to-toe purple with a matching manicure to deliver a speech about mental health in The Hague