Any public anti-corruption hearing, which would likely be held later this year, would embarrass the Andrews government by exposing allegations that taxpayer resources were rorted by Labor kingmakers to obtain political power within the party. 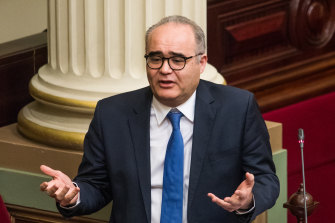 Adem Somyurek is under investigation for alleged branch stacking.Credit:Jason South

The Independent Broad-based Anti-Corruption Commission and the state’s Ombudsman launched a joint inquiry in June 2020 to focus on the alleged misconduct of Mr Somyurek, a former minister in the Andrews government.

The investigation was sparked after The Age, The Sydney Morning Herald and 60 Minutes revealed evidence, included in secret recordings of meetings, that Mr Somyurek and other powerful Labor figures allegedly directed taxpayer-funded parliamentary staffers to help them recruit non-genuine members into local Labor branches.

The practice is known as branch stacking and has been endemic in pockets of both major parties. Successful branch stackers can control who enters Parliament and the outcome of internal party processes. The practice has been described as a cancer on democracy by past Labor and Liberal leaders. If branch stacking is carried out using public resources, it may also involve the offence of misconduct in public office.

After the recordings were published, Mr Somyurek was sacked as a state minister and forced from the ALP. Two other ministers who were his factional allies, Marlene Kairouz and Robin Scott, also stood aside from cabinet.

IBAC can only launch an inquiry if it “reasonably suspects corrupt conduct has occurred”.

Ombudsman Deborah Glass has also seconded investigators to the probe as part of a unique pooling of human and jurisdictional resources by the two watchdogs.

Mr Davey previously investigated the 2004 executions of police corruption witness Terry Hodson and his wife Christine. After leaving the Victoria Police, he worked in a senior investigative role at the state’s building regulator before joining IBAC as a senior anti-corruption investigator.

Sources who have had dealings with the inquiry but are not authorised to speak publicly say Mr Davey and other investigators have spoken to Labor insiders and have examined secret recordings of Mr Somyurek and other Labor figures. IBAC has the power to compel witnesses to private or public hearings, where they must answer truthfully or face criminal charges. The agency can also tap telephones.

IBAC tends to only hold public hearings if it has gained evidence of wrongdoing and assessed that its exposure is in the public interest. In past inquiries, this evidence has involved conversations captured by phone taps or testimony given by whistleblowers. Mr Redlich also has the power to deliver inquiry findings in a report tabled to Parliament.

Among the factors likely to be weighed by Mr Redlich in deciding whether to convene public hearings is the fact that the Ombudsman previously published a parliamentary report about taxpayer resource rorting by the Andrews government in the so-called “red shirts” affair. The alleged misconduct of Mr Somyurek and some of his allies occurred after that report was tabled in 2016.

Mr Somyurek has denied all wrongdoing and late last year used parliamentary privilege to accuse the media and others in Labor of wrongdoing. He declined to comment for this story.

Mr Somyurek has sought to downplay the recordings by claiming others in Labor, including Premier Daniel Andrews, have also branch-stacked. There is no evidence Mr Andrews has engaged in branch stacking and The Age and Herald do not suggest he has engaged in any wrongdoing.

Mr Somyurek has also reportedly filed defamation proceedings against 60 Minutes after his demands for a $2 million payout and apology were rejected by the program.

The recordings of Mr Somyurek have already led to reforms inside Labor and the removal of hundreds of non-genuine members as part of an investigation led by ex-Premier Steve Bracks and former federal minister Jenny Macklin. Similar branch stacking revelations in the media involving the Liberals have also prompted expulsions and reform, albeit on a smaller scale.

While Mr Somyurek has largely disappeared from public view, his former political allies continue to push back against what they say are unjust efforts by rival Labor factions to use the ex-minister’s downfall to amass factional power.

Ms Kairouz, who also denies all wrongdoing, has issued legal proceedings against the ALP to challenge efforts by Labor’s national executive to expel her from the party.