Fun mum! Princess Madeleine of Sweden whizzes down a slide as she enjoys a day out with her son Prince Nicolas, 7, and husband Chris at Skuleberget National Park

Princess Madeleine of Sweden showed her fun-loving side as she spent some quality time with her son at a national park.

Madeleine, 40, who resides in Miami with her American husband Chris O’Neill and their three children, kickstarted the summer with a holiday in her home country.

The Swedish royal carved out some time in her busy schedule for special moments with her son Prince Nicolas, seven, and her husband at Skuleberget National Park.

The mother-of-three let her hair down as she and Nicolas took part in activities at the Discovery Park, where they whizzed down a slide, took part in arts and crafts lesson, and took a hike around the park. 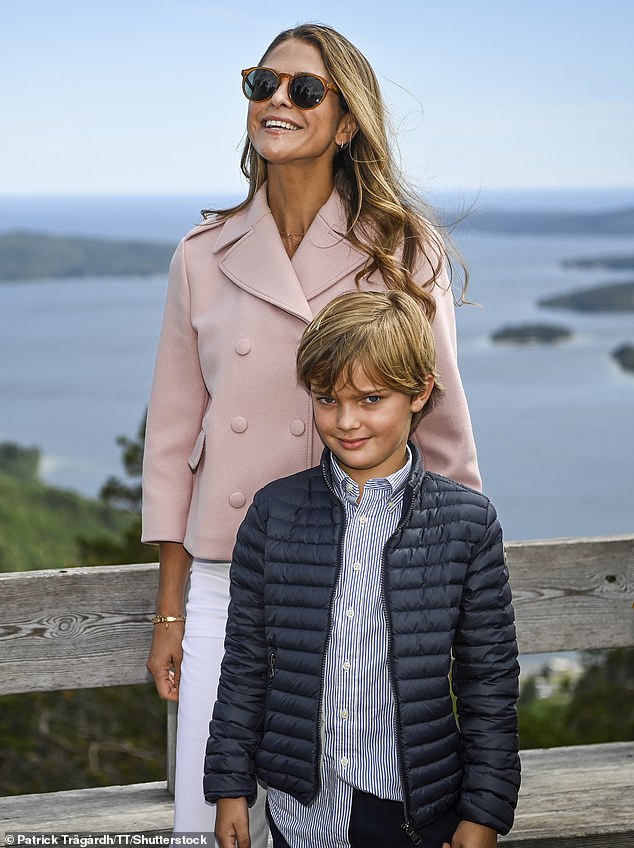 Princess Madeleine, 40, who resides in Miami with her American husband Chris O’Neill and their three children, kickstarted the summer with a holiday in her home country 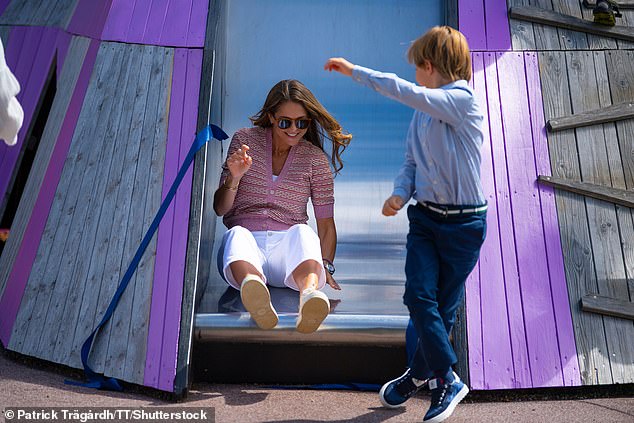 The Swedish royal carved out some time in her busy schedule for special moments with her son Prince Nicolas, seven, and her husband at Skuleberget National Park

For her day out, Madeleine picked a wide-legged ankle-length white jeans and a pink and a white t-shirt she wore under a pink cardigan.

She completed the look with a pink salmon jacket and white trainers.

The busy mother-of-three wore her honey blonde hair down in wavy locks. She was also wearing a pair of sunglasses for her busy day out.

Madeleine sported her trademark bronzed makeup, with just a dash of blush and a nude lip. 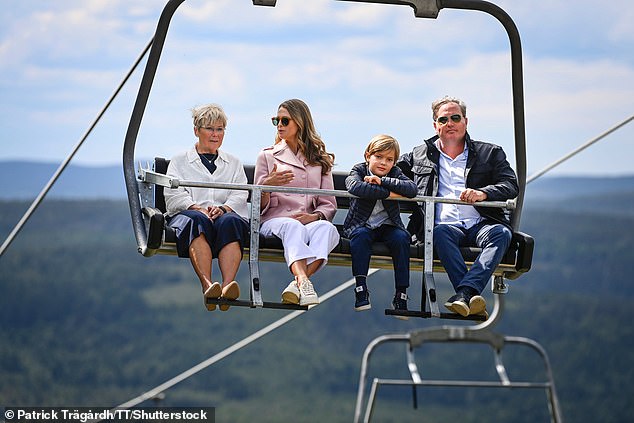 The Princess, her financier husband Chris O’Neil and their son hopped on a cable car to the park’s highest peak

Meanwhile, Prince Nicolas looked at ease in a checked white and blue jacket and jeans.

The pair seemed to be having a blast as Nicolas got his mother to go on the play area with him.

The mother-of-three let her inner child loose as she slid down a slide with her son, before taking part in an arts and craft lesson.

After this, Madeleine, Nicolas and Chris O’Neill hopped on a cable-car up the mountains to get a better view of the park. 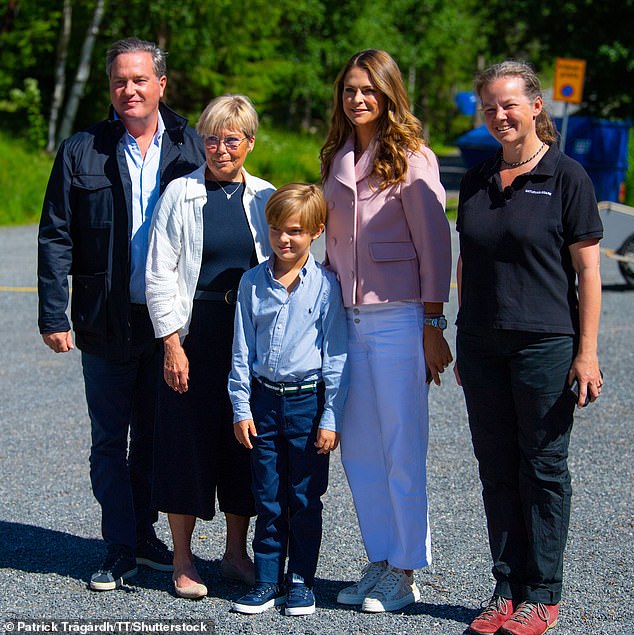 Madeleine and her family visited the part with County Governor Berit Hogman, left, and were welcomed by Anna Carlemalm, right 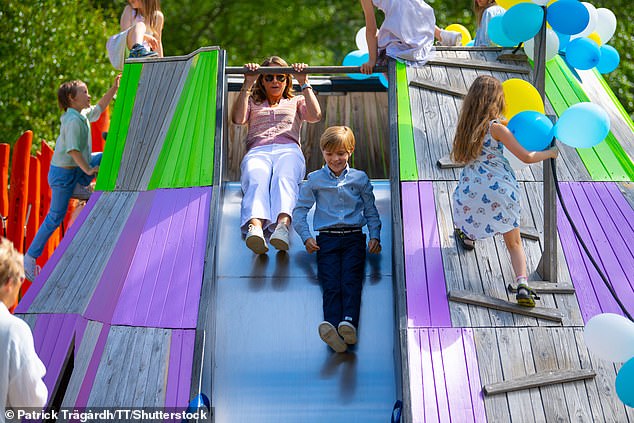 From there, they took a tour of the park with County Governor Berit Hogman.

The mother-of-three, who’s returned to her home country last week, has been living in the US since she married financier Chris in 2013.

The couple have three children, Princess Leonore, eight, Prince Nicolas and Princess Adrienne, who is four.

While her older siblings, Crown Princess Victoria, 44, and Prince Carl Philip, 43, are working royals who still resides in Sweden and are very involved with the crown, Madeleine lives a quiet life abroad.

However, she is still the royal patron of several Swedish charities and is dedicated to helping their work. 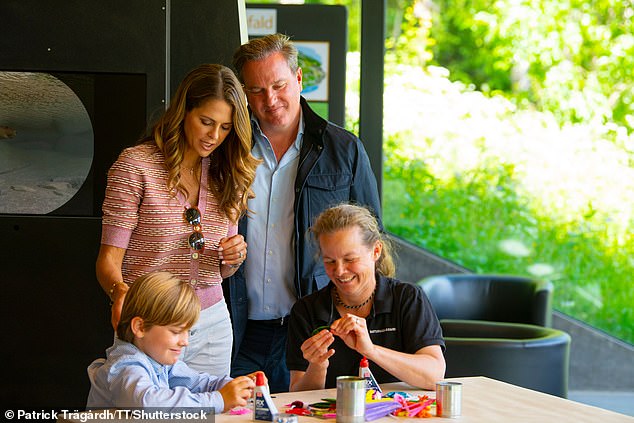 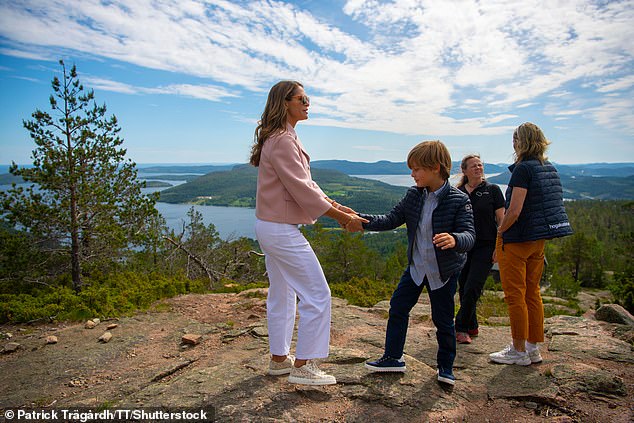 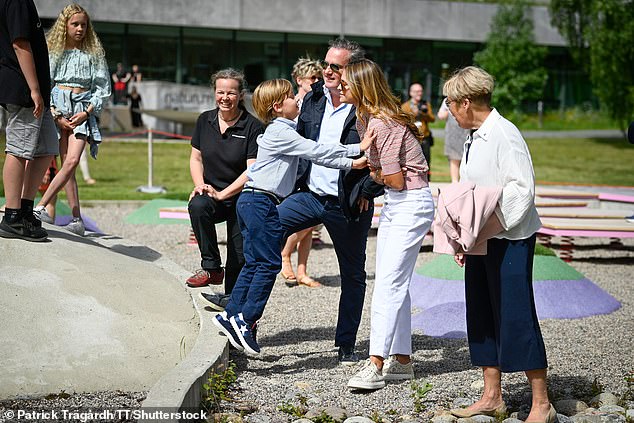 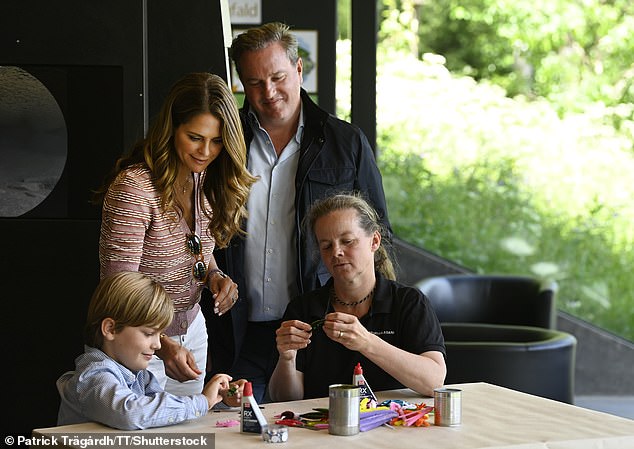 Nicolas showed off his dexterity during the DIY class, as impressed Madeleine and Chris looked on

Yesterday she hosted a tea party at the Royal Stables for My Big Day, a Swedish charity which puts on fun events for children living with serious illness.

In pictures shared on the Swedish royal family’s Instagram, Madeleine, dressed in a pink dress, fully immersed herself in the event, beaming as the children got to ride horses and carriages, and pet the animals during their special day.

The eight young guests travelled from different parts of Sweden, being treated to a limousine ride to the Royal Stables for the event.