Meghan Markle and Prince Harry spoke about their podcast in the short clip released today. Prince Harry’s body language may have suggested he looked more “confident and dominant” than other recent appearances.

The Duke and Duchess of Sussex were seen for the first time since announcing they would not return to their official royal duties.

Meghan and Prince Harry officially stepped back from their royal roles in March last year and confirmed they would not return last week.

Instead, the royal couple will pursue careers of their own outside the Firm.

Last year, they announced they would release a series of podcasts and the first episode was broadcast in December. 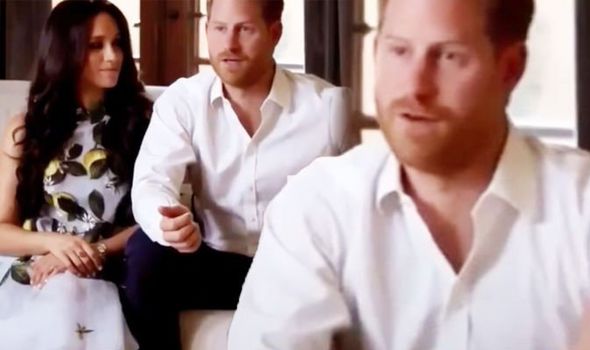 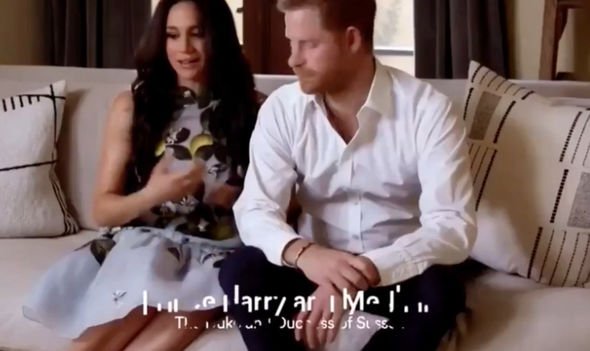 Recently, the royals have only been seen a handful of times as they have appeared via video link.

In fast, she suggested he seemed more “assured” than any other clips since the couple moved away from the UK.

“Perhaps as a result of all the drama this week in terms of Harry and Meghan’s roles within the royal firm, Harry appears to have come back fighting here with a much more confident, assured and even dominant performance than we have seen from him since he went to the US,” Judi stated.

“It has normally been Meghan taking a bit of a lead role in their video clips while Harry would sit performing a series of anxiety rituals or even looking distracted beside her and often looking squashed down one end of the sofa.

“But here he takes the more dominant spot, with his legs splayed wide in a gesture of confidence bordering on arrogant and his words and gestures a lot more on-message and energetic.”

The expert suggested, while Meghan has taken the lead in recent appearances, this was not the case in the latest video.

Instead, the Duchess of Sussex was spotted sitting next to her husband and she seemed more “demure”. 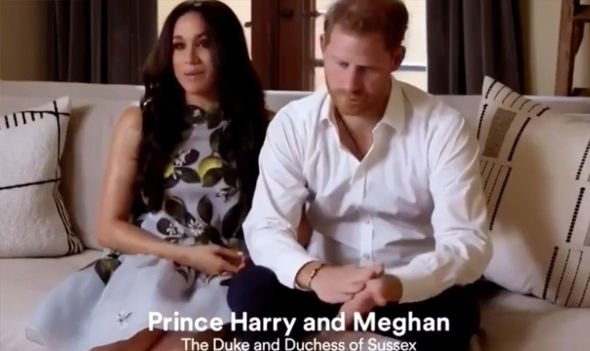 Judi continued: “We’re seeing Harry as a driving force in this appearance while Meghan sits demurely beside him with her hands folded on her lap in a semi-regal look.

“Harry uses wide hand gestures with a display of open palms to show non-verbal eloquence and even that erect thumb suggests he is enjoying putting his message across.”

Judi stated Prince Harry looked happy to be sharing his message in the new video.

The growing confidence of the royal was also obvious in his delivery style, the expert added.

“This looks a lot more like The Harry Show, suggesting he is growing in confidence in the US and finding his feet in terms of delivery style,” Judi added.

In the video, the couple are seen sitting together on a cream sofa.

Their body language with each other suggested they are still showing signs of “unity and support”.

The expert explained: “The closeness of their torsos and legs as they sit together send out a strong message of unity and mutual support here.”