Global pop sensation Amber Liu is back with a new EP, and she tells HollywoodLife how her forthcoming ‘Z!’ EP came about from exploring ‘a new side of myself’ while discovering who ‘Amber Liu’ really is.

Three is a magic number, and Amber Liu will cast a spell while completing the trilogy with Z!, the third in a series that began with 2019’s X and 2021’s y?. To help Amber’s fans get hyped for this upcoming EP, the Chinese-American pop star is taking everyone to “Paradise.” With a neon-glowing bassline that radiates pure funk, “Paradise” has Amber “take the past / throw it back” to “live in the present / you and me” while cruising through Malibu. “With ‘Paradise,’ I was painting a picture of things being perfect,” Amber shares with HollywoodLife over email. “I’m a hopeless romantic, what can I say?”

That optimism can be found on Amber’s upcoming release, along with some deep introspection. “I feel like with Z! I realized on this journey, I didn’t really know who “Amber Liu” [was.] I was struggling with “not knowing the answer.” Sometimes you just don’t know the answers or have the solutions, but it doesn’t have to be a bad thing,” she tells HollywoodLife. Amber said that during this past year, she found herself at a crossroads and was “falling into bad habits.” So, she focused on writing and “explored a new side of myself” while allowing her to show her “most authentic and vulnerable” side in this new music.

During the EXCLUSIVE interview, Amber shares what “experimentation” fans can expect with the new EP, how she felt about speaking out on the pressures of the K-Pop world, and the significant reason she records many songs in Mandarin. 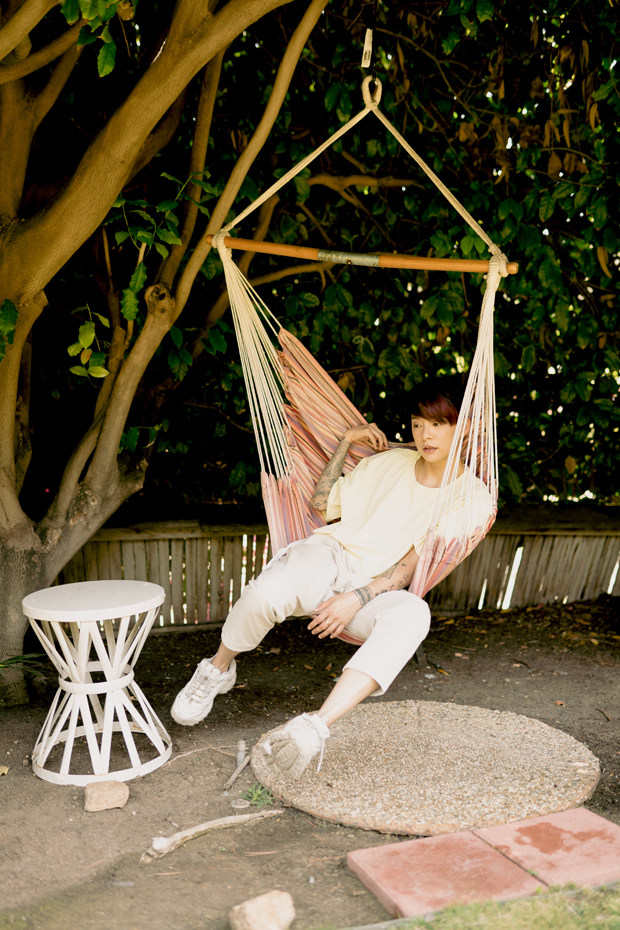 HollywoodLife: There’s a wide range of emotions on your last EP y?. “Complicated” is very melancholic and bittersweet, while “neon” is playful and upbeat. And you now have this song, “Paradise.” Despite all the very different sounds on these EP’s, would you say Z! has one cohesive theme or message you will be trying to send?

Amber Liu: I’m always trying to experiment. I think through the process of X, then y? and now Z!, I was just trying to be “me.” Learning the meaning of self-love has been a struggle haha. I feel like with Z! I realized on this journey, I didn’t really know who “Amber Liu” [was.] I was struggling with “not knowing the answer.” Sometimes you just don’t know the answers or have the solutions, but it doesn’t have to be a bad thing. Accepting that chaos is a part of life has helped me slow down a lot and try to find positivity when things look grim. I hope everyone struggling with that knows that they aren’t alone, and a lot of the time, answers come when you least expect them.

Vegas is really special to me. It’s a place that I go to when I want to escape and find peace of mind. I actually wrote the songs “vegas” and “Paradise” around the same time. I was wishing things were okay in “vegas,” but with “Paradise,” I was painting a picture of things being perfect. I’m a hopeless romantic, what can I say? Haha

You’re also running all around Las Vegas for the “vegas” music video. What was filming for that like? Do you have any fun stories?

Being on the set of “vegas” felt so incredibly freeing. There’s truly nothing as liberating as dancing in the middle of the desert. I loved just being able to mess around and let my goofy personality shine through.

What were you going through in your personal life that you channeled into this album?

During this past year, I was inspired to just write as much as I could to lift myself out of the slump that I was in. Similar to the ‘y’ shape, I felt like I was at a crossroads in my life. I was feeling very insecure, and I began falling into bad habits, so I turned to writing to explore a new side of myself and allow myself to heal while showcasing my most authentic and vulnerable self.

You also served as a mentor on the Chinese reality TV survival series CHUANG 2021 earlier this year, and you’re about to be on a new show soon. This is a new type of role for you lately– have there been any surprises with it?

I’ve never been an “official” mentor, but I’ve always talked with my friends and colleagues about art and business. I know with the uncertainties and urgency of this industry, the surprises are endless. There was a collaboration stage that I had with the contestants, and with such little time to prepare and so much to do, I learned so much from them and a lot about myself. It was a breath of fresh air to be in a group performance again like the old times. I think I was shocked by how much I see myself in these young contestants and how reminiscent of my past it made me. It really takes me back to a time when I too was a new artist, and I loved being able to share my knowledge with them. 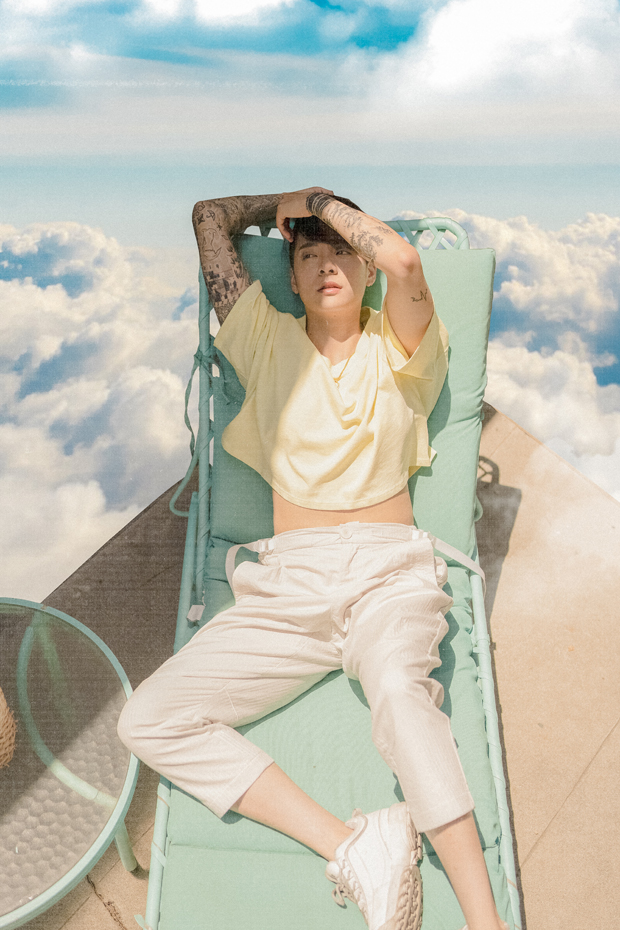 You started your career in a very successful girl group, f(x). What is a surprising thing fans may not know about the journey you have made from being in a girl group to now being a solo artist?

It might bore people, but the business is very different. The team dynamics, my roles, the responsibilities. Artistically, f(x) was all about experimentation and trying to do things differently. I still stand behind that mission in my solo career while also staying true to myself.

Do you ever miss your idol days in K-Pop?

Of course. Even though I didn’t understand the language, music to me is a universal language, which is what allowed me to form such a special connection with K-pop. I loved the vibe, so I was able to connect despite not having a complete understanding of what was going on.

You made waves in January of 2020 by speaking out against the pressures of the K-Pop industry on CBS Morning. What motivated you to do this interview and be so transparent about such a taboo subject?

Being thrown into the K-pop industry at such a young age was really hard for me since I was constantly being told what to do, what to say, what to look like, and even what to think. It’s a lot of pressure when the industry has such power over you, and it really took a toll on my mental and physical health. I don’t want anyone else to go through what I did. I hope by sharing my experience and thoughts, I could bring awareness to the topic since it is rarely discussed. I hope that I was able to shed light on this issue to let people know that they’re not alone in these struggles, promote a healthier way of living, and destigmatize mental health care.

Are you getting involved with or celebrating American Asian Pacific American Heritage Month next year?

Now more than ever, in the midst of the issues that we have been facing in relation to the pandemic, I am trying to be a voice for those in the Asian-American community. I will continue to celebrate and advocate for my culture by spreading awareness of what’s going on and donating to AAPI foundations. I’m also performing at a virtual conference with Amazon Studios to examine the state of AAPI representation in media on May 20th, which can be viewed free of charge on their website. We will work to change the stereotypes of AAPI members that exist in popular culture and reimagine strategies for societal change through a variety of performances that showcase AAPI ethnicities and cultures.

You offer Mandarin versions for many of your songs. For example, ‘Paradise’ in your upcoming EP comes in two versions. Even in your last EP, there were two different featured artists (PENIEL on the English track and Blow Fever on the Mandarin one) for your hit song ‘neon.’ As someone who comes from a Chinese background, why is it essential that you offer fans your songs in both languages?

My mom is one of my biggest inspirations, and she loves when I sing in Mandarin since she doesn’t speak English very well. Just like how I want my mom to be able to enjoy my music, I also want my fans in Asia to be able to sing along with me. I want to be able to sing for everybody, and I love the different vibes that the two versions carry.