Some of the nation’s most conservative voices have joined Labor parliamentarians in paying tribute to Labor senator Kimberley Kitching, remembering the 52-year-old as an approachable and genuine colleague who was “loved on all sides” of politics. 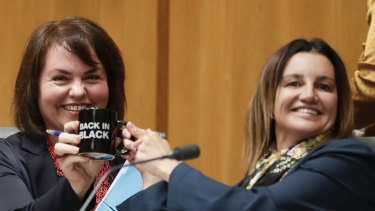 The late Kimberley Kitching has been honoured by colleagues across the political aisle.Credit:Alex Ellinghausen

“We were all shocked,” Senator Jacqui Lambie told RN Breakfast on Friday morning. “She was really loved on all sides … She had a very unique way of doing things. How did she do that? I think it was her friendships and the way she communicated.”

Senator Abetz, who served on multiple parliamentary committees with Senator Kitching, said the pair had worked extremely well together, including on the Magnitsky laws now being used to punish Russia for its invasion of Ukraine. The laws, passed last year, enable the Commonwealth to seize the assets of individuals who have committed human rights abuses around the world.

“Kimberly was an important factor in ensuring we got that sort of unanimity and bipartisanship in the Senate,” he said.

Mr Shorten told Sky News on Friday morning that conservative commentators would be “feeling this loss” because Senator Kitching was a regular interview guest who, “fearless but also polite”, never shied away from discussing matters with those on the other side of politics.

“I wish she was here to hear all the nice things that are being said about her,” he said.

“She would talk to Rita Panahi, she would talk to Andrew Bolt … Sometimes people want to have the other point of view put to them. And we’re so used to living in our own echo chambers.”

Mr Albanese, who had appointed Senator Kitching to the Opposition front bench, said her death was “a tremendous shock for the entire Labor family”. He would not be drawn on Mr Shorten’s comments that the pressures of a preselection battle had put her under immense stress.

“It is something that was just totally unexpected … She was just beginning her political career,” Mr Albanese said. “Kimberley was someone who lit up a room when she was there. She was so full of life.”

Panahi described Senator Kitching as “a warrior for Australia”, while Bolt declared on Sky News: “This is someone who had guts … this is a politician who would defy her own party to fight for the right things.”

Senator Hanson tweeted overnight that she was devastated by news of Senator Kitching’s sudden death, describing her late colleague as “always happy, approachable and genuine.”

“We shared mutual respect for each other and I will miss her terribly,” she wrote.

The two senators travelled to Afghanistan together in 2018 and Senator Hanson said it was there that they formed a close friendship.

Senator Kitching was a member of an informal cross-party grouping of national security hawks known colloquially as the Wolverines, which Senator Abetz said “is holding the Chinese dictatorship to account”, and the international Inter-Parliamentary Alliance on China.

Senator Patrick said in a tweet that Senator Kitching “will be dearly missed”.

“We agreed, we disagreed, we talked, we schemed for good, we dined,” he wrote, describing Senator Kitching as an asset to the Labor party, the Senate and the people of Victoria.

Liberal senator Jane Hume said Senator Kitching “was a truly fine senator, a proud and fierce Victorian and a friend”.

“While we came from different corners to the political ring we shared values of liberty, human dignity and a belief in the ability of public policy to create public good,” she tweeted.

Prime Minister Scott Morrison said in a statement that Senator Kitching was “a serious parliamentarian” with a deep interest in national security and he had come to greatly respect the way Senator Kitching approached the issues she championed.

“Her passion for her country was always greater than any partisan view,” Mr Morrison said.