The federal government took a small step towards recognising Australia’s long Indigenous history over the New Year by changing one word of the national anthem, but it is making very slow progress on the much bigger issue of an Indigenous Voice to Parliament.

Prime Minister Scott Morrison announced on New Year’s Eve that the line in Advance Australia Fair describing the country as "young and free" would become "one and free".

But a much more practical issue was raised on Friday when the government released a discussion paper drafted by Indigenous leaders Marcia Langton and Tom Calma on the model for what it calls an "Indigenous Voice to the Australian government". 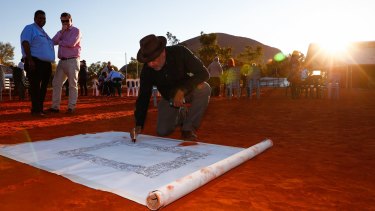 Indigenous leader Noel Pearson signs the canvas used for the Uluru Statement from the Heart’s artwork in 2017.Credit:Alex Ellinghausen

The 240-page document is well argued and based on widespread consultation, but it has already been criticised because it accepts many government preconditions.

Most importantly, the new body would be created without the change to the constitution proposed by the Uluru Statement from the Heart in 2017. The discussion paper accepts that the Voice would be created by and operate under ordinary Commonwealth legislation.

The proposal for a Voice has also been separated from the Uluru statement’s recommendations for a Makaratta commission on truth telling about Indigenous history and the idea of a treaty.

Without those elements, the new body would not be all that different from six other Indigenous advisory bodies set up since 1957. All of them started with hope and then were scrapped when they caused problems or could be used as a convenient scapegoat.

The discussion paper says its model is better because it is more clearly structured in its design and more independent from government. Unlike the Aboriginal and Torres Strait Islander Commission established by the Labor Party in 1989, it would not administer government policy.

But as a consequence it would share responsibility for advising on government programs with other Indigenous bodies. For example, the Coalition of Peaks, an alliance of existing service organisations, would retain the job of advising on Closing the Gap policies. The discussion paper says the Voice would "complement and build on existing structures", but it risks being lost in the cacophony.

The model provides for a body of about 20 members to be constituted as either a statutory agency or as a private corporation recognised in legislation with a chief executive officer.

But there are some significant unanswered questions, such as about when the government would have to ask for advice. The model suggests that the government would always have to consult with the Voice on legislation that relies on section 51 of the constitution, the so-called "race power". But on other broader policy, even when it has a major effect on Indigenous people, the government could choose not to consult.

Another question is whether the members of the body would be elected directly or appointed via local advisory bodies. Elections would offer the body more legitimacy, but given its limited role it might prove hard to attract good candidates.

The model is well thought out and better than nothing. But it is hard to see the Voice as proposed offering the sense of reconciliation and closure that is desperately needed. Nor will it create an institution with the solidity to ensure it is listened to. The model only makes sense as a stepping stone to a true Voice entrenched in the constitution.

Note from the Editor

The Age’s editor, Gay Alcorn, writes an exclusive newsletter for subscribers on the week’s most important stories and issues. Sign up here to receive it every Friday.