It’s industrial inaction – not industrial action: PHILIP NORMAN rails against the ‘self-righteous and duplicitous’ misuse of words by union strikers as he urges them to stop violating the English language

For generations, workers in dispute with their bosses either went on strike or ‘worked to rule’, sometimes described with equal honesty as ‘a go-slow’.

But in the 1970s, they became lumped together as ‘taking industrial action’ – a term that was both self-righteous and duplicitous, since action now meant its exact opposite: inaction.

No phrase could be more of its time than ‘industrial action’: it wears shaggy sideburns and a garish kipper tie, smokes Hamlet cheroots and has a dab of Hai Karate aftershave behind each ear.

Yet here it is back again in the supposedly revolutionised and reformed world of 21st Century railways, on posters plastered around deserted stations and with pickets distinguishable from their predecessors 40 years ago only by their high-vis jackets.

Here it is rolling as sanctimoniously as ever off the tongues of union officials, claiming that people sympathise with the well-paid train-drivers who are preventing them from getting to work when their need to do so was never more desperate.

Here it is being resorted to, threatened or balloted about by barristers, port workers, nurses, teachers and refuse-collectors countrywide. Abba’s recent return to the spotlight was modest by comparison.

Industrial action is one of three emblematic 1970s expressions whose built-in lies we barely notice any more.

The second came out of the Northern Ireland Troubles, when the Provisional IRA (about whom there was nothing ‘provisional’) widened their bombing campaign to what was chillingly termed Mainland Britain.

The resulting fearful precautions and wholesale disruption to our lives, multiplied many times since, we call ‘security’ without the ‘in’ that belongs in front of it. 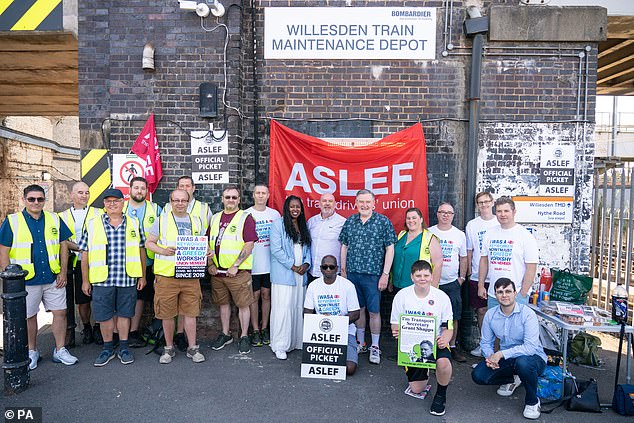 Industrial action is one of three emblematic 1970s expressions whose built-in lies we barely notice any more. Pictured: The picket line at Willesden Junction station in London, as members of the drivers union Aslef at nine train operators walk out for 24 hours over pay 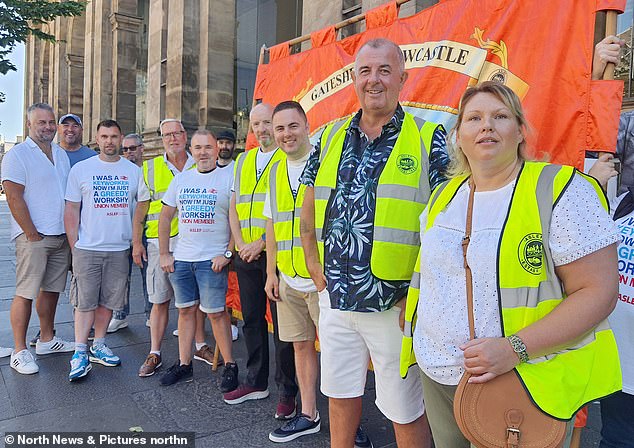 No phrase could be more of its time than ‘industrial action’: it wears shaggy sideburns and a garish kipper tie, smokes Hamlet cheroots and has a dab of Hai Karate aftershave behind each ear. Pictured: Members of the Aslef union at the picket line in Newcastle Central Station

The third dishonest word came from the miners’ and rail-workers’ strike of 1973-74 when the government reduced the working week to three days and launched a ‘Save It’ campaign to conserve what was then reasonably priced energy.

But afterwards, ‘save’ stuck around and changed its meaning to ‘spend’, as in ‘Save ££££s in Sofa Heaven’s Great Bank Holiday Sale!’

I have a Dutch colleague whose love of the English language is greater than any English person’s I’ve ever met. ‘You people are so succinct,’ he’s always telling me. ‘Like the sign “Mind The Gap’ in London Tube stations. In Holland, we’d need five times as many words to say the same thing.’

Certainly, one can admire in an objective way the weight of deception and/or pretension that can be packed into a single phrase. Think only of ‘customer service’. Or ‘Golden Delicious’. Or ‘no worries’.

George Orwell famously observed that the essential first step to undermining truth is to tamper with language. And in today’s ‘woke culture’ – a name I find distasteful to type for its sheer illiteracy – our boundlessly beautiful, powerful and expressive tongue is being tampered with as never before.

With few of our Armed Forces left on active service overseas, there’s been less mention of the ‘friendly fire’ with which grieving parents are sometimes told their sons or daughters have been killed, as if that should be some comfort.

Instead, as repellent in its own way, we have the phrase ‘safe spaces’ which universities now pride themselves on creating for their students. Safety, that is, from any viewpoint that might contradict their preconceived notions or prejudices, once the whole purpose of further education.

Staff members who threaten to disrupt this torpid twilight zone are driven out of their jobs and visiting lecturers with any hint of controversy are ‘cancelled’ (the implication being not the event but the person scrubbed out) or ‘no-platformed.’

The same Orwellian censorship is applied to subjects being studied. 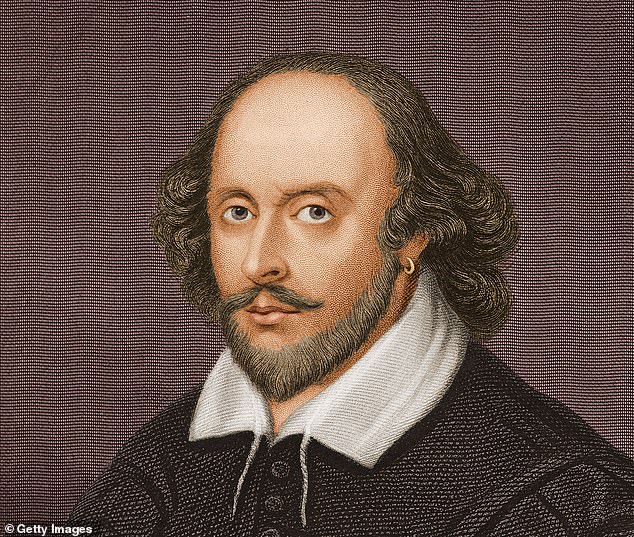 A Scottish university recently warned its English students that a range of authors including Shakespeare, Dickens, Jane Austen, Charlotte Bronte and even Agatha Christie might upset or ‘challenge’ them – surely, the measure of any true classic

A Scottish university recently warned its English students that a range of authors including Shakespeare, Dickens, Jane Austen, Charlotte Bronte and even Agatha Christie might upset or ‘challenge’ them – surely, the measure of any true classic.

Regular book-writers like myself are particularly vulnerable in this climate. More than one fellow author has had an about-to-be-published work birth-strangled and has been dropped by their long-time publishers because someone in the office had been offended by something they’d written.

The novelist Sebastian Faulks is so scared of being labelled sexist (for the accusation automatically spells guilt) that he’s vowed to give no more physical descriptions of his female characters.

If Gustave Flaubert had had such cold feet over Emma Bovary or James Joyce over Molly Bloom, think how much poorer literature would have been.

Meanwhile, so-called ‘identity politics’ have spawned the offence of ‘cultural appropriation’, meaning, for us writers, to use characters not from one’s own ethnic group. Especially culpable is any writer who is white and their characters are not.

I have to admit my own backlist includes a collection of stories largely about African-American musicians and a biography of Jimi Hendrix. 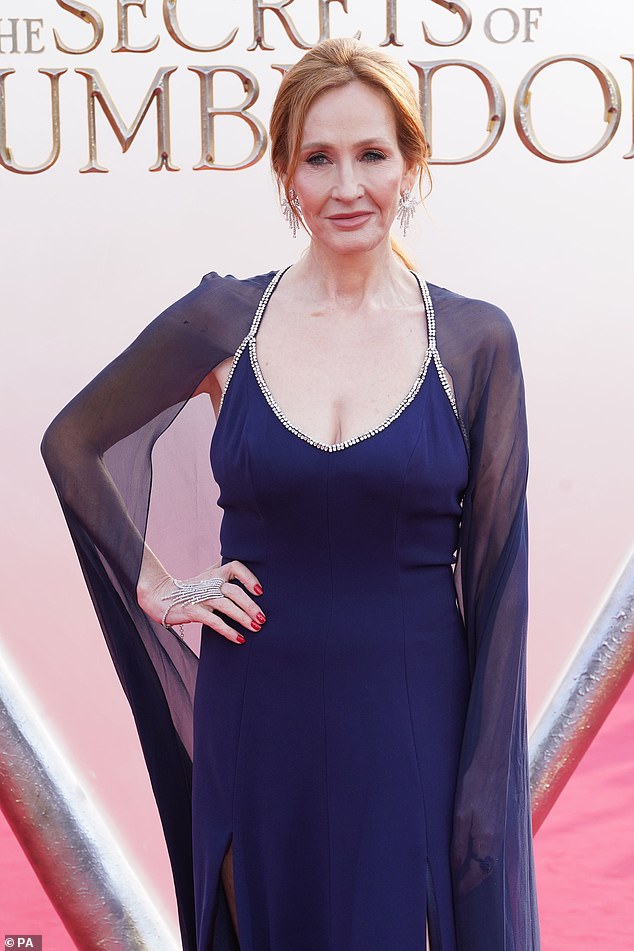 But more often, it is a vindictive mob such as has hounded and persecuted and even threatened the life of J. K. Rowling via social media for having exercised her right to free speech on matters of gender

My sole motive was to glorify them and their artistry. Yet if either book had been published today, I’d doubtless be in trouble with the prose police.

My least favourite bit of misrepresenting modern jargon is ‘the national conversation’, with its beguiling vision of civilised people in quiet discussion over bone- china teacups.

But more often, it is a vindictive mob such as has hounded and persecuted and even threatened the life of J. K. Rowling via social media for having exercised her right to free speech on matters of gender.

The trouble is, these woke tribunals manufacture new condemnations in such quantity that it’s hard to keep up.

While riding in Uber cabs whose drivers have African or Eastern European backgrounds, I’ve thought it only friendly to ask where they or their families started out from.

But according to the latest woke decree, this isn’t friendliness: it’s ‘a micro-aggression’.