Disability worker David Wragg has become increasingly concerned about the quality of remote teaching his seven-year-old daughter Elissa has received in the past 18 months.

Be it creating pet rocks or baking cakes, the work her school has set has too often been educationally dubious, or overly reliant on the involvement of parents who may be trying to hold down jobs, he argues. 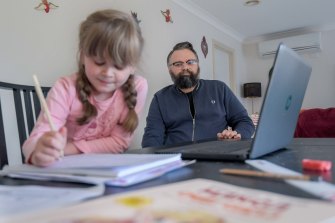 Disability worker David Wragg, at home with his daughter Elissa, has serious misgivings about the quality of her remote education. Credit:Joe Armao

But the most troubling aspect in his mind has been the near total absence of live engagement Elissa has had each day with her teacher and her year-one classmates.

Each day at the state school Elissa attends in Melbourne’s outer west begins with a 15-minute online session for the class, followed by a day of offline tasks that he or his partner submit via Google Classroom.

Last month he wrote to Education Minister James Merlino to express his frustration that, rather than improve with each lockdown, the level of instruction his daughter got had deteriorated.

“The Victorian education system is failing to deliver even a basic education to my daughter and her classmates during these formative years when children’s minds are being primed for academic success and to learn pivotal skills for life,” he wrote.

Mr Merlino wrote back two weeks ago, assuring Mr Wragg that the Department of Education and Training had reviewed his complaint, but found that the school “delivers above the daily minimum guidelines for year 1 students in relation to remote and flexible learning programs”.

The minister’s response missed the point, Mr Wragg says, stating for example that the school had offered his family an iPad and on-site supervision for his daughter, solutions that were “irrelevant to my concerns”.

“My concern is that Elissa is not being educated,” he said.

Victorian schools have had six terms of moving in and out of lockdown.

How those benchmarks are met has never been prescribed nor standardised for schools, which have the latitude under Victoria’s devolved school governance model to deliver remote learning programs as they see fit.

Jordana Hunter, the Grattan Institute’s education program director, says some schools are delivering remote learning in a way that could set students back.

“I don’t think it’s bad to have variation,” Ms Hunter said. “What concerns me is when you’ve got kids who are not getting much teaching at all. There’s kids that are still doing worksheets, not getting a lot of live teaching and that’s a concern.”

Elissa attends a relatively disadvantaged school, but across town at a large and far more advantaged state primary school in Melbourne’s eastern suburbs, parents have expressed the same frustration about a lack of real-time engagement.

Lucinda Mack works in the equestrian events industry, and has been out of work during lockdowns. Had this not been so, she fears her daughter Maya’s progress would have stalled.

A school day for Maya, who is in year 4, typically involves a 40-minute Webex session each morning, after which time she is left to complete her assignments offline.

Ms Mack estimates that she dedicates as much as five hours a day to supervising her daughter’s schoolwork.

“I’m fortunate in that my work doesn’t happen during lockdown … but there are plenty of parents that are working from home who cannot spend the time sitting there with their child,” Ms Mack says.

Though students are asked to submit their work on Google Classroom, Ms Mack says there is rarely any follow-up in the form of assessment from the school.

“Because there is no accountability for her, there’s no motivation to actually do the work,” she said.

Tina King, the acting president of the Australian Principals’ Federation, defends the performance of schools and says they have delivered “huge enhancements” in remote learning this year.

“What we’ve learnt through this is how adaptable schools have been in adjusting to the needs of kids and the feedback they are getting from families and even their own self-reflections,” Ms King says.

She says it was not always appropriate to give children hours of online learning and screen-time, particularly in the younger years.

Some fee-paying private schools that attempted to replicate the face-to-face curriculum by running live classes all day have recently come to the same conclusion and backed off from this approach due to concerns about excessive screen time.

St Kevin’s College adjusted its timetables early this month, ending all classes involving screen time by 1pm. Haileybury has done the same for children up to year 4.

Victorian students have missed as many as 160 days of remote learning since March 2020.

NSW – where students have missed close to 80 days – introduced online check-in assessments for schools when face-to-face lessons resumed last year. They found students had fallen three to four months behind in literacy and numeracy, prompting a $337 million tutoring catch-up program in that state.

Victoria brought in its own $250 million tutoring initiative, but has not brought in check-in assessments, meaning NAPLAN results for 2021 are the only published measure so far of student progress in the pandemic.

Those results, however, indicated Victorian students literacy and numeracy skills have not suffered in the pandemic.

The state government is poised to reveal a road map for the return to face-to-face learning on Sunday.

Professor Fiona Russell, a paediatrician and epidemiologist with the Murdoch Children’s Research Institute, says it is likely community cases will rise as students progressively return to classrooms.

But as vaccination rates increase – particularly once a vaccine becomes available for children under 12 – schools will no longer need to close whenever there is an infection, she says.

An Andrews government spokesperson said schools deliver the Victorian curriculum through teaching and learning programs developed locally, as is the case with face-to-face learning.

“Schools are also required to provide regular wellbeing checks to every student, and to follow up on any concerns, whether they are learning-related or in regards to mental health,” the spokesperson said.

Stay across the most crucial developments related to the pandemic with the Coronavirus Update. Sign up for the weekly newsletter.