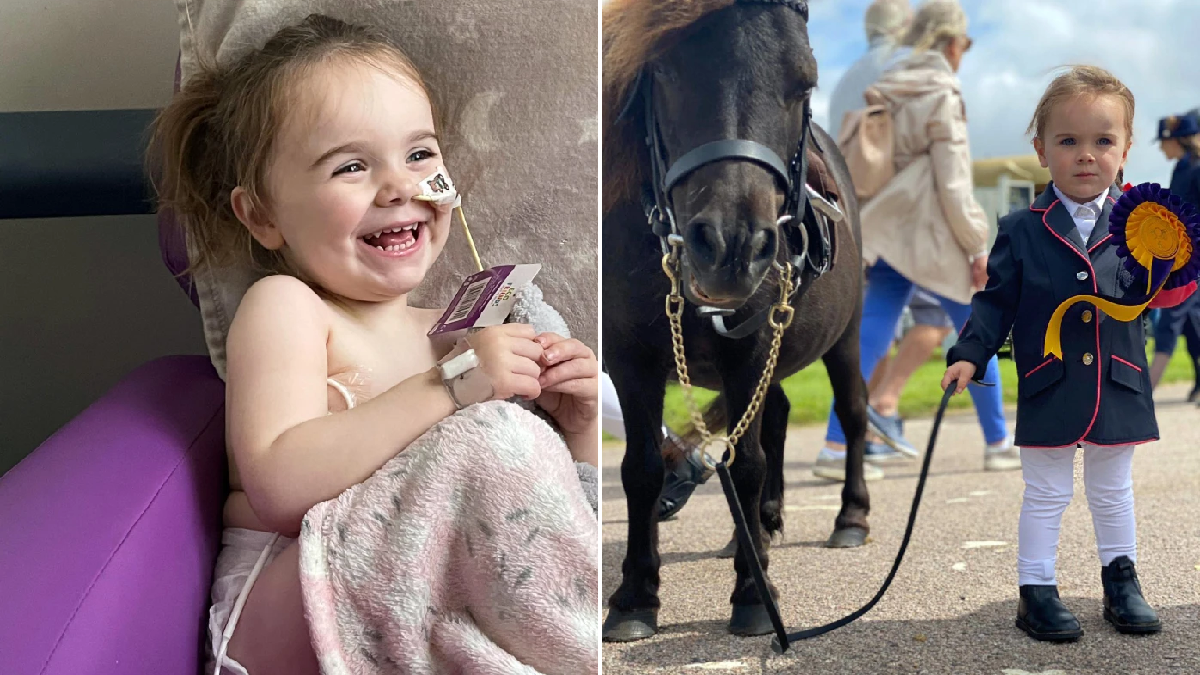 When two-year-old Marley Shaw told her parents she didn’t want to walk, they had no idea about the devastating cancer diagnosis around the corner.

‘Marley told me that her knee was hurting,’ first-time mum Charley says.

‘I thought maybe she had bumped her leg, she was walking with a limp and I thought perhaps she had stumped her toe or maybe her shoes had rubbed her feet.

‘I didn’t think much of it. She had no other symptoms or reasons to think she was unwell.

‘She wasn’t pale, she didn’t have a high temperature or any bruising to suggest it was anything serious.’

But when Marley’s pain worsened and she refused to walk, Charley and her partner Callum took the toddler to A&E.

Charley adds: ‘She is always energetic, never stands still but she cried if I tried to put her down, she just wanted to be carried so we took her to hospital.

‘I thought maybe she had twisted or sprained her ankle. I never in a million years thought it would be any serious.’

Doctors first suspected the pain to be down to an infection in her hip, so ran some blood tests.

However, two days later, results revealed the toddler had acute lymphoblastic leukaemia – a form of cancer that attacks white blood cells and can spread quickly and aggressively.

‘We are beyond devastated. The last month hasn’t felt real,’ recalls Charley.

‘The results have turned our world upside down but we feel lucky that doctors found the cancer when they did.

‘I don’t want to think about what could have happened if we hadn’t noticed her limp.’

Now she faces weekly chemotherapy treatment – but Charley stresses the youngster is struggling to understand what’s going on.

The mum-of-one adds: ‘She is having nightmares, she is so scared of all the needles and the constant medicine.

‘She is too young to understand we are just trying to help her and she just wants to be left alone.

‘It’s too much for her little body to go through and to see her personality change is heart breaking.

‘Just weeks ago she was such a happy and adventurous little girl.’

The medication has also caused Marley’s hair to fall out and she faces more surgery to see if the cancer has spread.

Charley and Callum have also struggled as, due to Covid restrictions, only one person can be with her at a time.

The charity Young Lives vs Cancer has set up a fundraising page to help the family with temporary accommodation costs – as Marley was sent to a hospital 40 miles away.

Money donated will also help to buy toys and equipment for the children’s wards.

Charley now hopes her story will help warn other parents.

She continues: ‘I want to raise awareness of her limping symptom as it’s just something you wouldn’t think is a sign of cancer.

‘The leukaemia had spread to her leg, that’s what was causing the pain and causing her to limp.

‘I’m just praying that the chemo is working and our little girl will be okay.’