An overweight ex-detective whose heart stopped for 10 minutes when he suffered a cardiac arrest has shed 9st to be crowned Slimming World’s Man of the Year.

Ken McLeod, 62, of East Yorshire, piled on the pounds when his his job with Bedfordshire Police became less active and he eventually tipped the scales at 23st.

His diet usually consisted of a full English Breakfast, McDonalds or KFC with chips for lunch, fish and chips with gravy or curry sauce for dinner and a Kebab, Indian or Chinese takeout in the evening.

He would also wolf-down unhealthy snacks between meals – including sausage rolls, pasties, steak slices, crisps plus peanuts – and wash it all down with full-fat Coca Cola. 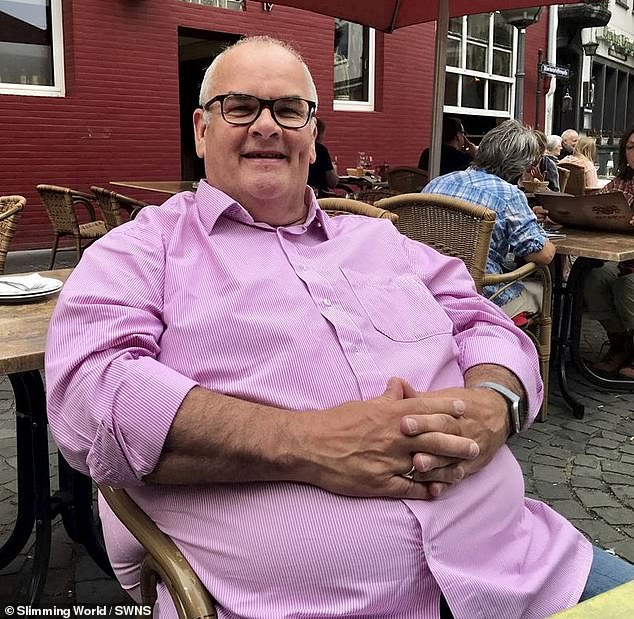 Ken McLeod pictured before his weight loss at 23 stone. His diet usually consisted of a full English Breakfast, McDonalds or KFC with chips for lunch, fish and chips with gravy or curry sauce for dinner and a Kebab, Indian or Chinese takeout in the evening 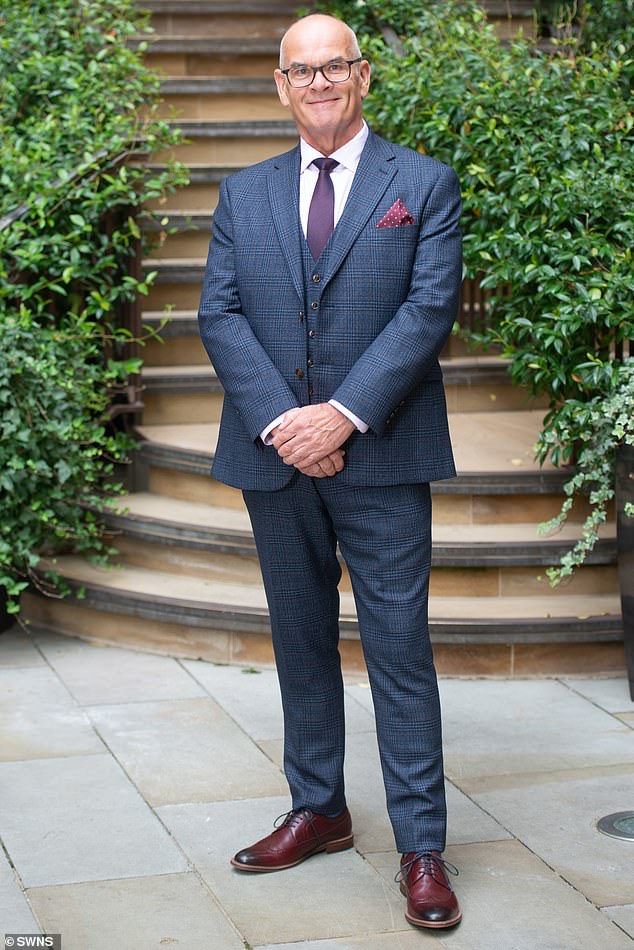 Ken after shedding nine stone. He’s gone from a size 5XL to a L or XL and his new diet consists of three trimmed bacon medallions in a wholemeal roll and two boiled eggs for breakfast

On his 39th wedding anniversary in 2018, Mr McLeod suffered a heart attack while on his way to hospital after developing a blood clot and collapsing in the street.

Despite his heart stopping for 10 minutes, he miraculously survived and went on to join Slimming World a year later.

Today Mr McLeod has been named Slimming World’s Man of the Year 2021 after losing nine stone, going from a size 5XL to an L or XL. 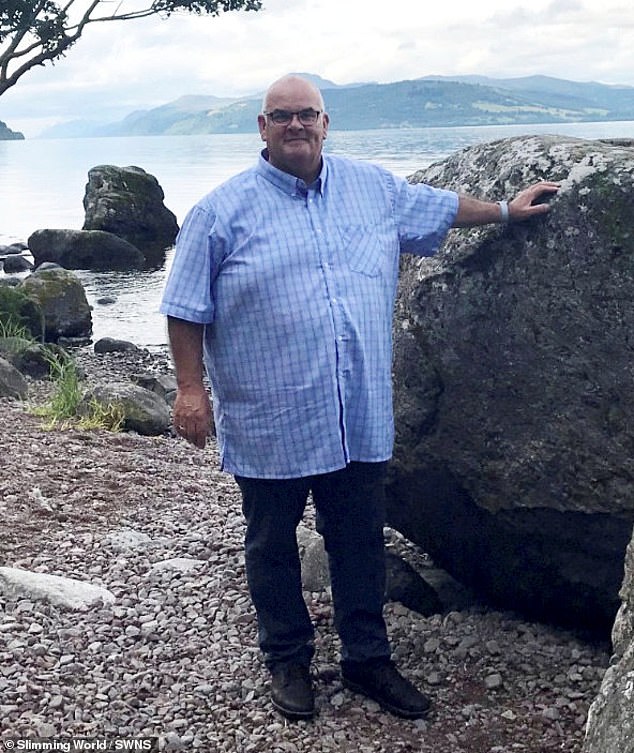 Ken before his weight loss. He was inspired to lose weight after his 39th wedding anniversary where he suffered a heart attack while on his way to hospital after developing a blood clot and collapsing in the street 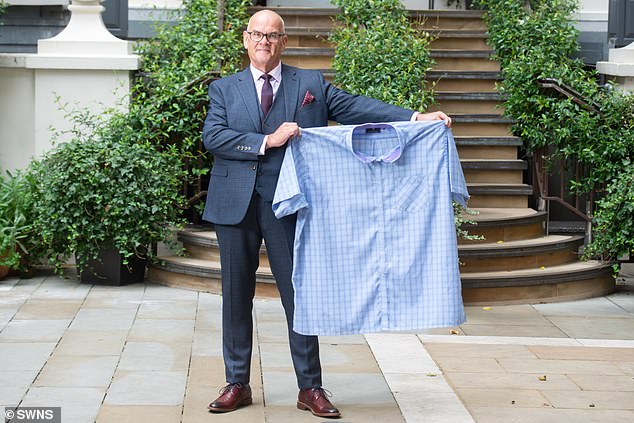 As a youngster Ken was always quite fit but lost control of his diet later in life. Ken poses with a shirt that used to fit him

Mr McLeod, who lives in East Yorkshire, said: ‘When I was in my teens and even up until about 30, I was actually always quite fit.

‘Then I became a police officer and was active throughout my service, but once I got promoted to the CID, my work became more desk based.

‘The weight piled on without me noticing because I think I carried it quite well.

‘Even though I was quite big, I was still quite fit and could march along with lads.

‘Obviously you try looking for excuses when you’re overweight, but once I ended up in hospital that’s when I realised I needed to do something.’

After coming out of hospital, McLeod attended a wedding with his wife Jeanette and realised how large he was. 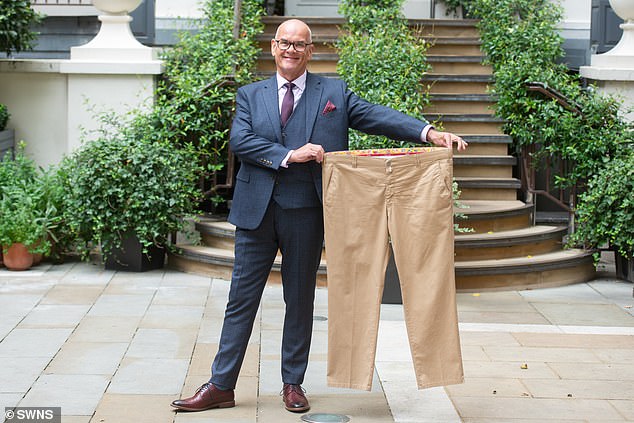 Once he got promoted in the police force and his job became more desk based he piled on the pounds. Ken poses with trousers that used to fit him 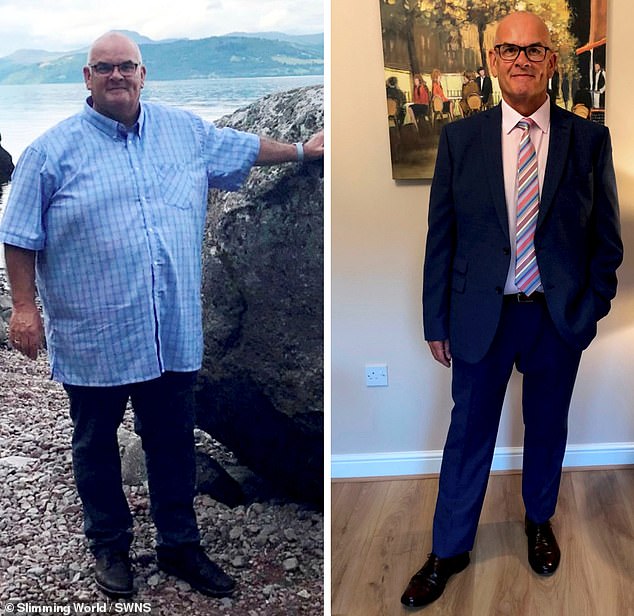 (L-R) Ken McLeod before and after weight loss. Before committing to losing weight he couldn’t walk 100 feet without getting out of breath 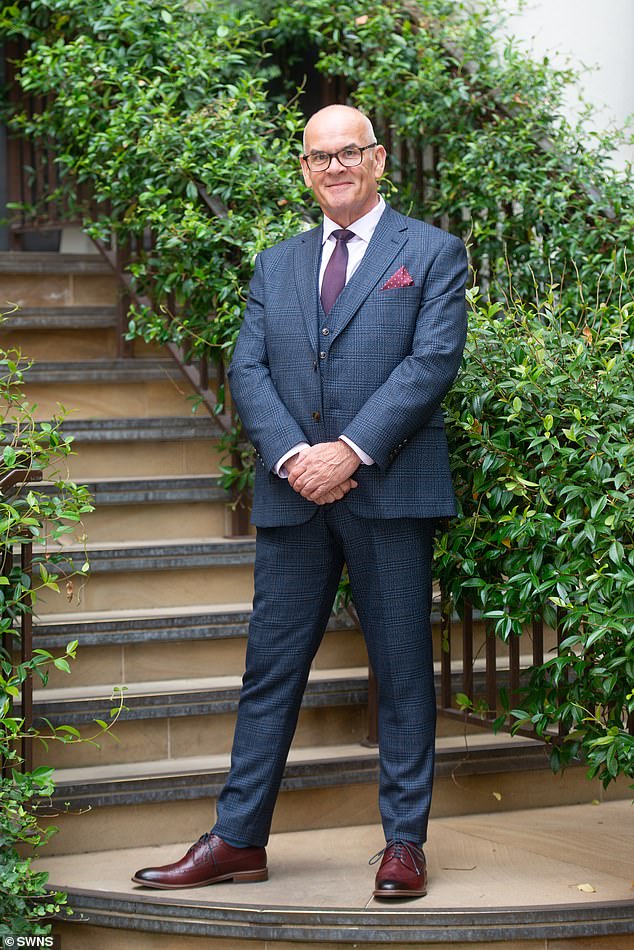 Mr McLeod said: ‘I went to a wedding with my wife in Aberdeen about a year after getting out of hospital and felt really uncomfortable in my suit.

‘I wasn’t well, and I didn’t want to be in any photographs for fear of ruining them.

‘Afterwards, we toured the rest of Scotland, but I didn’t even have the stamina to walk 100-yards without getting out of breath and tired.’

After getting home from their trip, Mr McLeod was inspired by a friend to attend the Leven in East Riding of Yorkshire slimming group run by Consultant Angie Ashton. 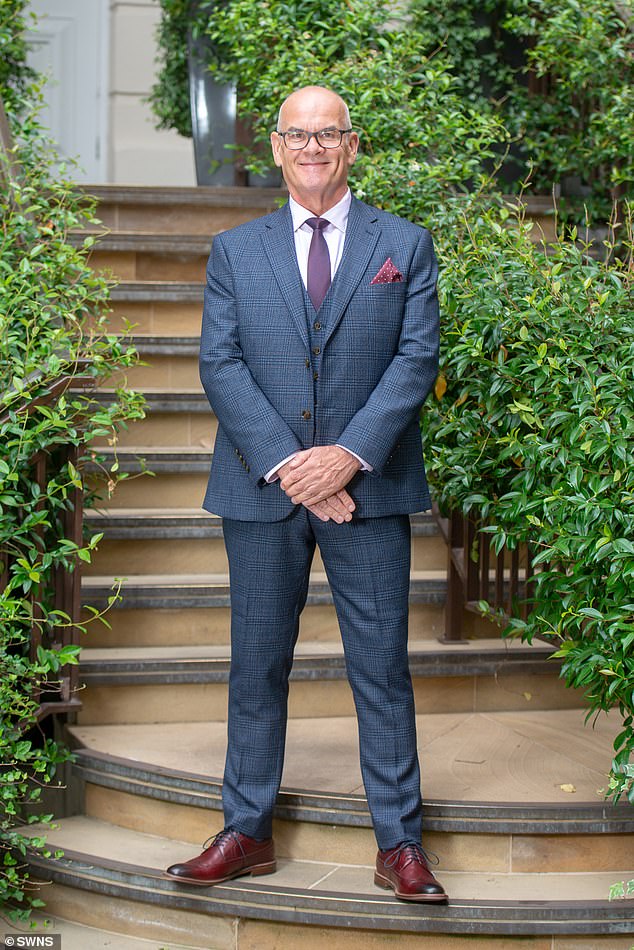 With his second chance at life and being in retirement, Ken is doing things he never thought he would when he was overweight. Pictured: Ken post weight loss

Mr McLeod, who is 5 ft 11′, added: ‘Even after losing a couple of stone I started to notice the benefits and I’m now at the point when I can buy clothes off the peg again.

‘Since losing weight I walk as much as possible, living in the countryside and near the sea means I can enjoy exploring lots of new places.

‘I can also get down on the floor and play with my little grandson, whereas before I would have had to lean on a radiator or a piece of furniture.

‘My whole life has changed over the past 18 months. Losing nine stones has given me a renewed sense of confidence, vigour and zest for life.

‘Now I’m fully retired, fit and healthy and I can do things I only dreamed of a year ago.

‘I’ve been given another chance at life and I feel like the man I was in my 30’s.

‘My ambition now is to life my life to the fullest – there’s no turning back.’

Deep fried fish and chips with gravy or curry sauce.

Indian or Chinese takeaway or a kebab in pita bread. Several beers or bottle of wine.

3 trimmed bacon medallions in a wholemeal roll and 2 boiled eggs.

Apple, banana or orange. Can of diet cola.

Slimming World HiFi Bar and a cup of tea.