Nurse is hailed a ‘hero’ as she shares epic tale of why she’s selling her engagement ring after ‘repulsive’ fiancé slept with a prostitute, stole from his dementia-stricken dad and tried to strangle her

A woman has become an internet sensation after selling her engagement ring on Facebook and giving a very in-depth explanation as to why.

Lisa Sconey, from Yorkshire, took to the Facebook group Rotherham Swap, Sell or Buy to advertise her £500 F. Hinds ring.

She explained that she had only worn it for nine months which prompted one social media user, known as Pam, to ask why she was getting rid of it.

The part-time nurse then launched into a rollercoaster of a story before being flooded with support. 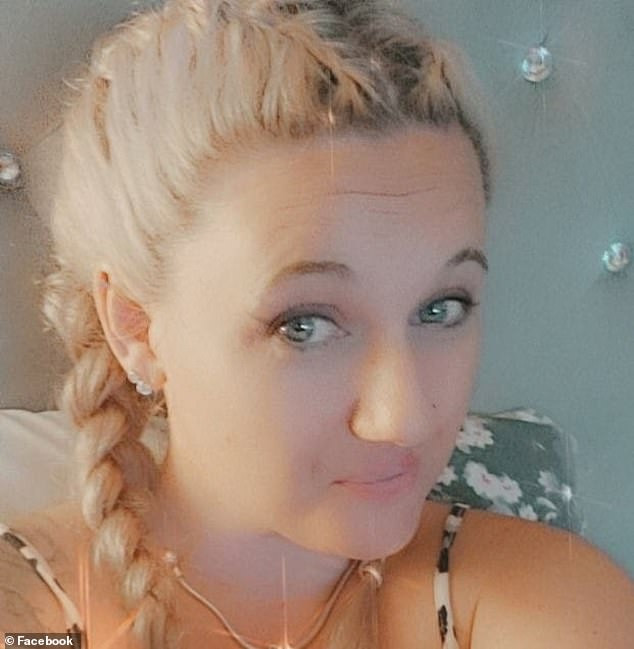 Lisa posted a photo of the ring in its box, and one woman, called Pam, got more than she bargained for when she causally asked the mother-of-two why she was selling the piece.

The single mother launched into the story, saying that she’d met her ex three years earlier and thought he was a ‘really nice, big soft giant’, who had been ‘hurt and cheated on’.

‘I thought I’d give it a try being the naive, vulnerable person I am and not realising everything he was saying had happened to him is actually what he had done to his ex wife and before that the mother of his children. I’m a mug Pam, really I am,’ she said.

Lisa explained that she didn’t find the unnamed man physically attractive, but wrongly thought he was a nice person. 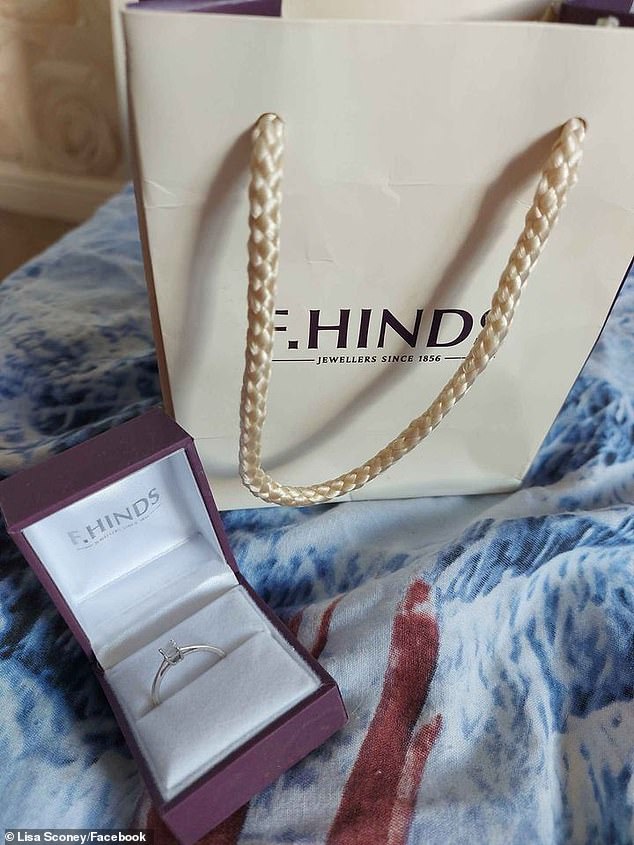 She candidly posted that she had only worn the ring (pictured) for nine months which prompted one social media user, known as Pam, to ask why she was getting rid of it 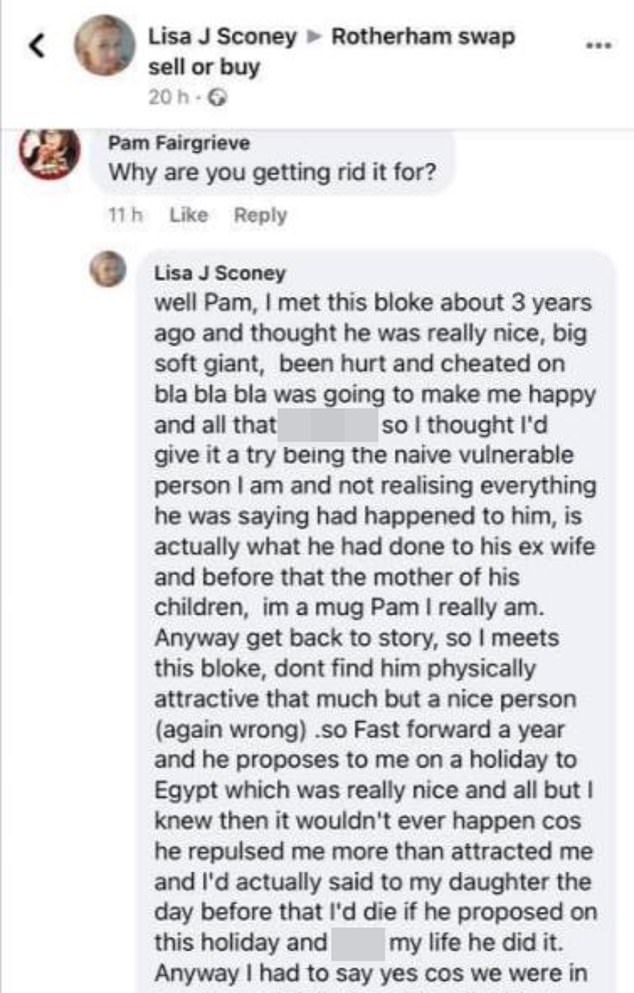 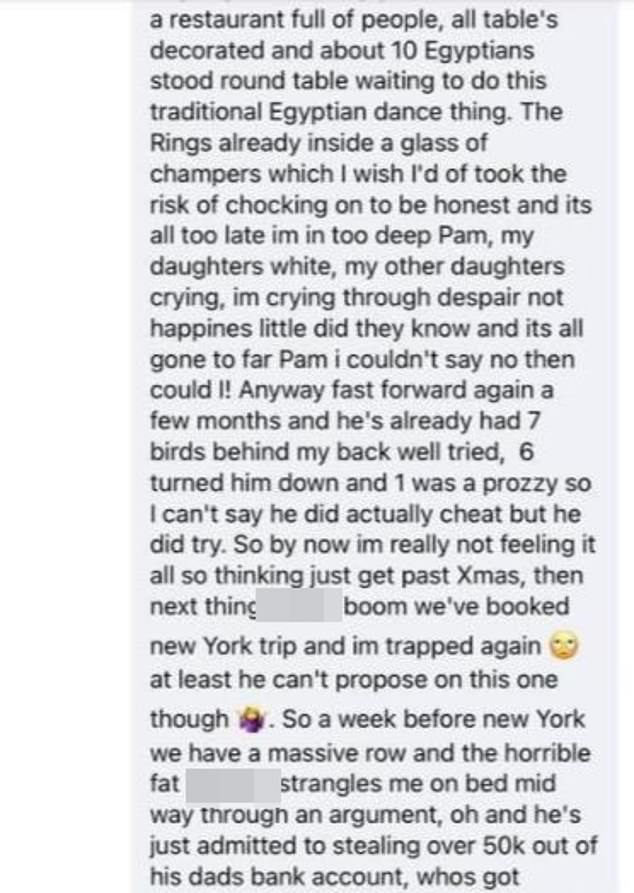 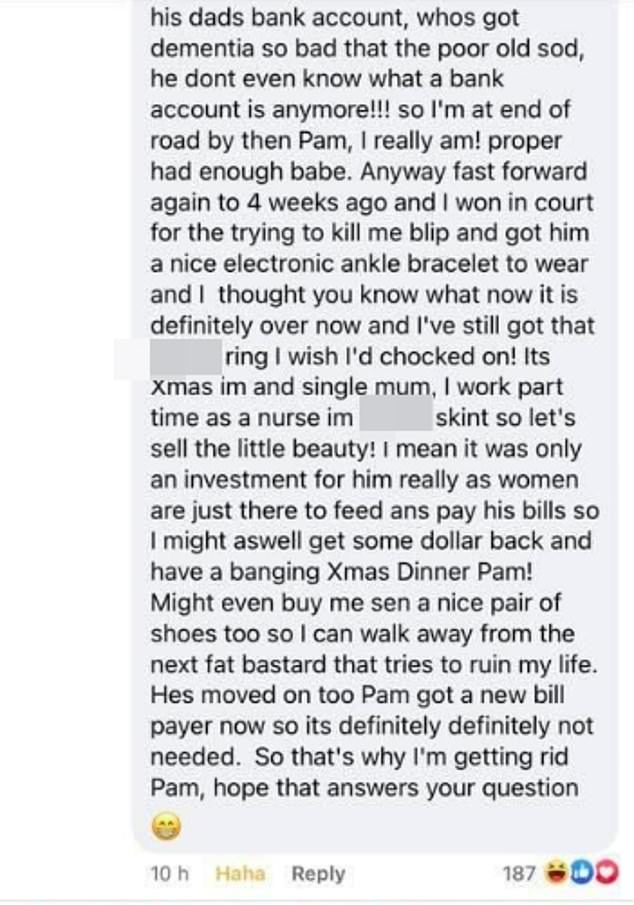 But then one woman, called Pam, got more than she bargained for when she causally asked the mother-of-two why she was selling the piece

‘So fast forward a year and he proposes to me on a holiday to Egypt, which was really nice and all. But I knew then it wouldn’t ever happen because he repulsed me more than attracted me,’ she said.

‘And I’d actually said to my daughter the day before that I’d die if he proposed on this holiday and f*** my life he did it.

‘Anyway I had to say yes because we were in a restaurant full of people, all the table was decorated and about 10 Egyptians stood round the table waiting to do this traditional Egyptian dance thing.

‘The ring is already inside a glass of champers which I wish I’d of took the risk of choking on to be honest, and its all too late.

‘I’m in too deep Pam. My daughter is white, my other daughter is crying through despair not happiness. Little did they know and it’s all gone too far, Pam, I couldn’t say no then, could I?

‘Anyway fast froward again a few months and he’s already had seven birds behind my back – well tried, six turned him down and one was a prostitute. So I can’t say he did actually cheat, but he did try. 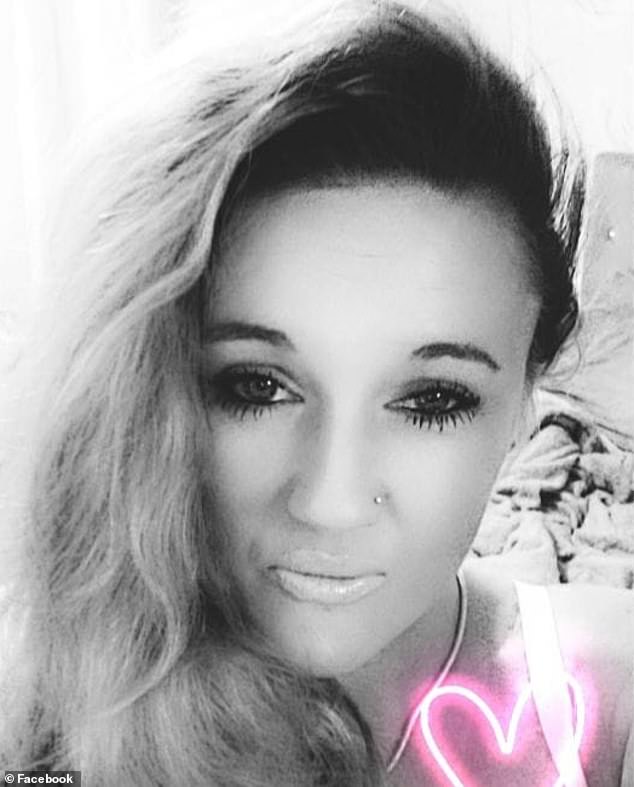 Lisa (pictured), a part-time nurse, then launched into a rollercoaster of a story before being flooded with support

And social media users were quick to praise Lisa’s outlook on life despite the trauma as they commented on the post which has since received more than 2,000 likes

‘So by now I’m not really feeling it all so thinking just get past Christmas then next thing f****** boom we’ve booked a New York trip and I’m trapped again. At least he can’t propose on this one though.

‘So a week before New York we have a massive row and the horrible, fat b****** strangles me on the bed mid-way through an argument and he’s just admitted to stealing over 50k out of his dad’s bank account who has got dementia so bad that the poor old sod doesn’t even know what a bank account is anymore!!!

‘So I’m at the end of the road by then Pam, I really am! Proper enough babe. Anyway fast forward again to four weeks ago and I won in court for the trying to kill me blip and got him a nice electronic ankle bracelet to wear and I thought you know what now it is definitely over now and I’ve still got that f****** ring I wish I’d chocked on! 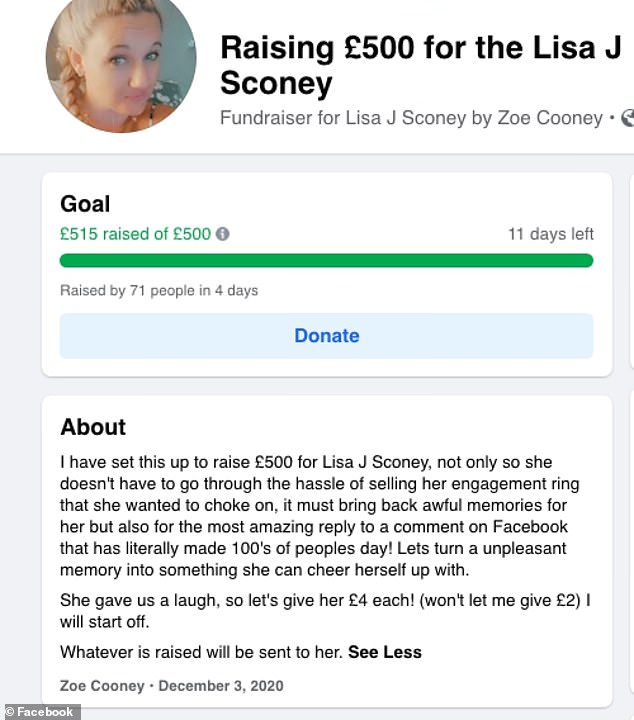 ‘I mean it was only an investment for him really as women are just there to feed and pay his bills so I might as well get some back and have a banging Christmas dinner Pam!

‘Might even buy myself a nice pair of shoes too so I can walk away from the fat b****** that tried to ruin my life. He’s moved on too Pam and got a new bill payer now it’s definitely, definitely not needed.

‘So that’s why I’m getting rid Pam, hope that answers your question.’

And social media users were quick to praise Lisa’s outlook on life despite the trauma as they commented on the post which has since received more than 2,000 likes.

One wrote: ‘You my dear are wait for it! LEGENDARY good on you love I hope you sell it and have a wonderful Xmas all the best.’

Another said: ‘What a woman! Brilliant! You go girl, made my week reading this.’

And a third said: ‘”Well pam…” How’s those f******* apples… Lisa my darling your comment has made my day, my week, my year… you win the internet. Have an absolute belter of a xmas beaut xxxxx.’

Pam has since removed her comment but a fundraiser called ‘Raising £500 for the Lisa J Sconey’ has since been set up for the mother-of-two.

The description read: ‘I have set this up to raise £500 for Lisa J Sconey, not only so she doesn’t have to go through the hassle of selling her engagement ring that she wanted to choke on, it must bring back awful memories for her but also for the most amazing reply to a comment on Facebook that has literally made 100’s of peoples day!

‘Let’s turn a unpleasant memory into something she can cheer herself up with. She gave us a laugh, so let’s give her £4 each! (won’t let me give £2) I will start off.

‘Whatever is raised will be sent to her.’