Home » Lifestyle » Nothing can match the nightmare of this writer's childhood

Spooked by TV horror? Not me…I grew up in a terrifying haunted house: Supernatural drama is making a killing. But nothing can match the nightmare of this writer’s childhood

Ghosts, one might say, are very much in the air at the moment. In the West End, the critically acclaimed 2:22 — A Ghost Story, starring Lily Allen, is the only play to see. Supernatural thriller Candyman has topped box offices with a £20 million global debut.

Rebecca Hall’s latest film, The Night House, involves a ‘knuckle-whitening’ haunted house. And let’s not forget Ghosts, the hit BBC comedy back for a third season, which attests to our eternal fascination with things that go bump in the night.

If it isn’t undead right now, it isn’t happening.

And so to my own shadowy story of a haunting that has stayed with my family for over 30 years. 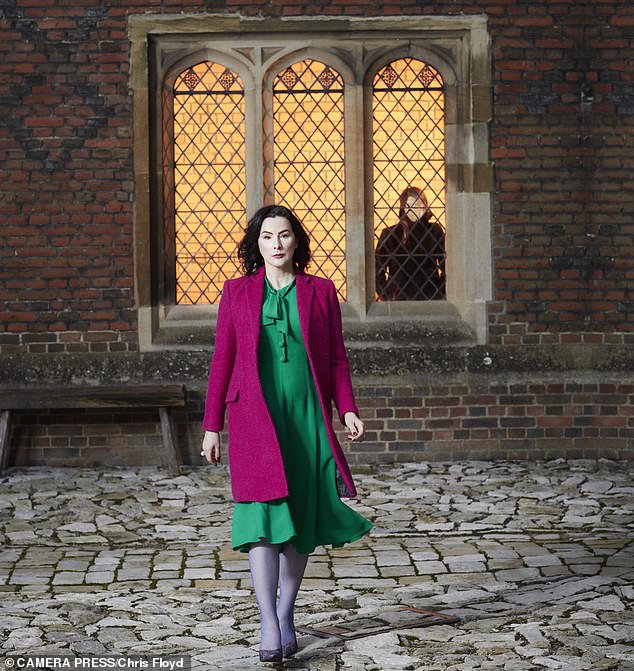 Next week, I will be interviewed by journalist and playwright Danny Robins for a new podcast called Uncanny, a BBC series about the supernatural.

Robins, who also wrote 2.22 — A Ghost Story, won acclaim for his Radio 4 podcast The Battersea Poltergeist, the true story of bizarre events that erupted in an ordinary South London home.

The podcast became a worldwide phenomenon — the No 1 drama podcast across the entire globe — sparking a bidding war for the television rights.

Like Robins’s Battersea clan, I too have experience of living in a haunted house, much as I feel rather mortified to say so.

And perhaps my family was as abnormal as our home because — unlike the usual heroes of this chilling genre — we sat things out, determined not to make a drama out of our macabre surroundings.

In the summer of 1987, when I was 16, my mother, father, four siblings and I moved into a three-storey, six-bedroom Victorian villa three miles from the centre of Birmingham.

According to local legend, our new home boasted three spectres: a woman who paced the ground floor, an aged doctor forever racing up the stairs searching for a dying grandson, and the victim of a confrontation that had spilled over into murder. There was even the traditional bloodstain on the stairs. 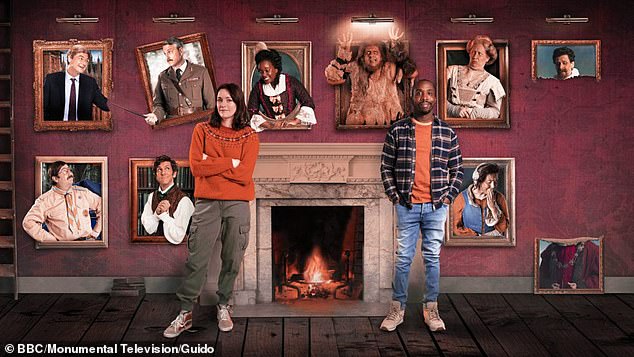 Hannah said within days of her family’s arrival at their six-bedroom Victorian villa, doors began to shut on their own and footsteps could be heard. Pictured: BBC’s Ghosts series three

A family of atheists, we scoffed at this. And yet, within days of our arrival, doors began to shut of their own volition, footsteps could be heard. Before long, every night at 4am, someone — something — would tear up the stairs, rattling, then thrusting open doors until it reached the main bedroom, bursting in with an almighty storm.

We would return home to find taps on full-force. An oven on the top floor would have its rings switched to red hot. We had it disconnected. It happened again.

One night, the boarded-up fireplace in my room ripped open. Behind it, stuffed up the chimney, were Victorian newspapers describing the house’s murder.

My mother started behaving oddly. We quizzed her and she confessed that, unable to sleep at night, she had seen a ‘dead child’ clad in Victorian garb. Meanwhile, my (extremely sceptical) father saw ‘a woman’ on the stairs.

The most terrifying room in the house belonged to my little brother. That summer, he became mute, sunken-eyed. Asked why, he sighed: ‘Every night, it’s the same. The lady with the big bottom [a bustle?] and the two men fighting over my bed, then one man hurts the other and the lady screams.’

My grandmother was next to occupy this room — then refused to ever again. My mother braved it. Come morning, its door was locked. She refused to describe what had occurred, saying only that it was ‘something to do with time’. Somehow this was — and remains — the most horrifying thing I’d ever heard. 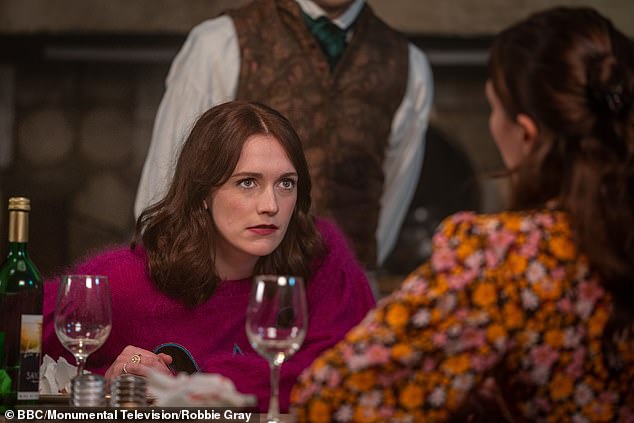 Hannah said unexplained encounters continued over the next 30 years, with a new cleaner refusing to return after witnessing a woman walk through a wall. Pictured: BBC’s Ghosts

The part of the narrative that brings most fear to others is this: one morning, drinking tea in the kitchen a few weeks in, we finally admitted something was taking place. Suddenly, a mirror sprang off the wall and shattered. On the back of its glass, in an old-fashioned script, the numbers 666 were etched, along with the message: ‘I’m going to kill you all.’

There was a terrible intensity to these events over that first summer. With time, this began to peter out. And yet, over the next 30 years, things did keep happening, especially when there were new people in the house. My nephew saw a child race through a door; a new cleaner refused to return because she witnessed a woman walk through a wall.

As we’ve still never really compared notes, only recently I learned that my mother, sister and sister’s friend heard a ‘very angry, Victorian-sounding church sermon type thing’ with a lot of shouting repeatedly through a baby monitor. And, I admit, this new revelation terrified me.

We didn’t talk about what happened at the time — and barely have since — because to do so would require an explanation and none of us have one. We were also concerned people would think we were mad. And yet, as I will tell Danny next week, the experience did shape me in certain ways. For a start, it gave me what are colloquially referred to as ‘balls of steel’. Even now, at 50, I’m not easily frightened. Things that spook others fail to move me. 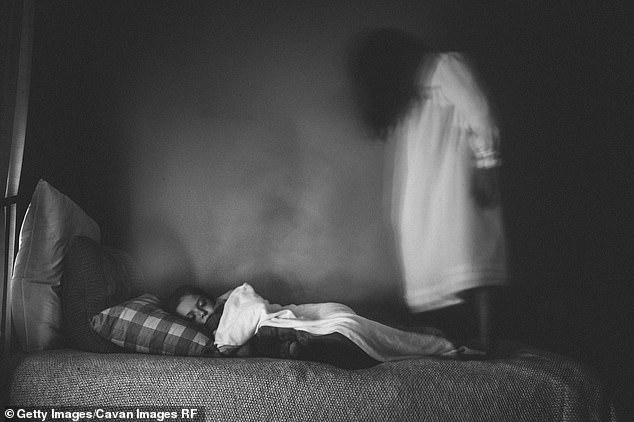 I lived on my own in countless different flats before securing a mortgage aged 47 and never felt unease. I’ve slept in supposedly haunted rooms and even been ghost hunting, by night, at Hampton Court and Kensington Palace — all without being ruffled.

At the same time, I don’t enjoy fear for fear’s sake. I won’t watch horror. Its relentless march proves unconvincing next to true horror’s slow and terrifyingly erratic burn.

Besides, why go there again? I suppose we showed guts. I may have left home two years after that summer but we stayed put until late 2017 — 18 months after my father died there. We persevered.

In the end, when first my mother was dying, then my father, and we would be wandering around the house in the small hours nursing them, the atmosphere felt not hostile but supportive. Where seven new occupants had unsettled it, with death, it knew what it was doing.

Our home made me curious, questioning, yet accepting that there are things I will never understand. I’ve discovered how hungrily people crave ghost stories. I also know how many people possess unnerving narratives of their own. Scratch the surface and often the most sane and rational individuals have some unexplained incident indelibly printed on their minds. 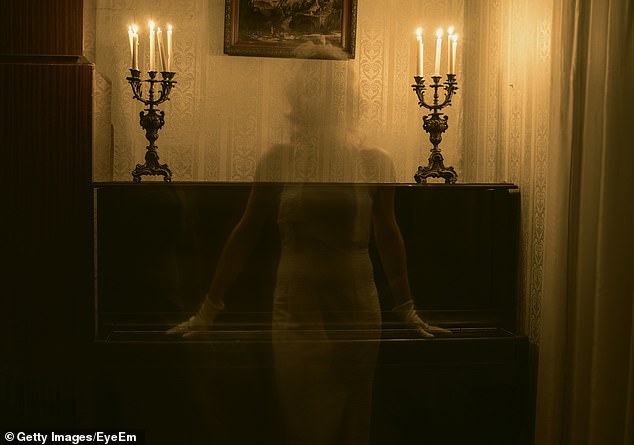 When my parents died, I also learnt how desperately one can yearn to be haunted. In the months after we cremated my father, I would have given anything to be visited by him.

I’d see him in old men on railway platforms, wake in the night convinced I would be able to summon his presence. This wasn’t a factor in our haunting but ghosts need not be ghouls — simply loved ones you long to see again.

The final thing this experience taught me: don’t write about your haunted house if you ever plan on selling it. We were open about its background, without scaring potential buyers off.

Yet at least one family was put off by talk of its ‘demons’ (imagine this word in a Brummie accent). Like us, the people who did buy it were delighted to find such a beautiful new home — and I hope they continue to be so.

Uncanny is released on BBC Sounds on October 20. A live show of The Battersea Poltergeist will take place this autumn: batterseapoltergeistlive.com