Nick Cannon knows how to be a kid with his kids!

In a video posted to Instagram, the “Wild N’ Out” host treated his 11-year-old twins Moroccan and Monroe to a fun day at a waterpark he rented out just for them.

“Waterpark to ourselves!!! It’s the Roc & Roe Takeover!!”  he captioned the clip. The 41-year-old filmed himself and the twins riding down a waterslide in a large tube, and sang along to Roc and Roe dancing for the camera at the bottom of the slide.

Cannon shares Monroe and Moroccan with ex-wife Mariah Carey; he is a father of eight children via various other relationships.

Cannon is no stranger to showing up and showing out for his children, during an interview with “The Hot Tee Talk Show” the father of eight reminisced about the time he shut down Disneyland for the twins’ birthday to spend quality time with Carey and their kids. 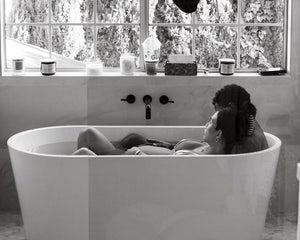 “We shut Disneyland down. It was the kids’ second birthday,” he recalled. “…We were in the castle, it was amazing. Like I said, fairy-tale memories. There’s no way that I could ever have an experience like that ever again.”

In terms of his relationship with the 52-year-old singer, although he described his romance with Carey as a “fantasy love,” he claimed “Mariah don’t want me.”

“That’s somebody I will always love,” he added. “I will never have a love like I had with Mariah. If I had the opportunity, if it could be the way that it was, I’m there.”

“We’re still close friends, the best of friends, great parents together. I appreciate that time in my life,” Cannon said in an interview with Entertainment Tonight. “Obviously we’ve all grown and evolved and went separate ways. But it was still like the biggest fantasy of my life.”