I should start with a clarification. When I say that National Lampoon’s Christmas Vacation is my favourite Christmas movie, I’m not saying it’s a great film. I’m not even saying it’s a good film. And I’m certainly not condoning every last iffy joke in it.

All I’m saying is that it’s a great Christmas movie. The adjective is all-important. At Christmas, we’ll cut a movie a lot of slack as long as it features plenty of snow, a soundtrack full of carols, and a curmudgeonly boss or neighbour who comes to appreciate the season’s true meaning.

For me, nothing says Christmas like watching a film you’ve watched a zillion times before. Christmas is about tradition and continuity, after all. It’s hardly the time for a Peter Greenaway fest, or a post-pavlova viewing of The Seventh Seal. The main job of the Christmas film is to channel the energy of Christmases past. You want a film that signifies Christmas, in pretty much every frame. 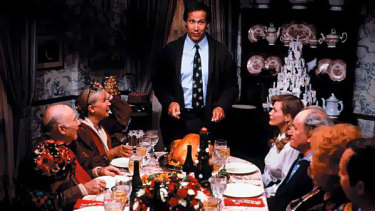 National Lampoon’s Christmas Vacation is just what you want: a film that signifies Christmas, in pretty much every frame.

In this respect, the Christmas movie resembles the Christmas tree. When you smell pine needles in your house you instantly know it’s Christmas because there’s no other time of year when you’d consider putting a live tree in your lounge room. Similarly, when you see Chevy Chase on your TV, preparing to carve a desiccated turkey, you can be sure it’s the season to be merry because this is a film you wouldn’t be watching in any other context.

I say this because I recently made the mistake of screening Christmas Vacation out of season, when it wasn’t Christmas. Viewed under those conditions, the movie stands revealed as a distinctly average 80s comedy. Most of the jokes are tepid reruns of jokes that worked better in National Lampoon’s original Vacation film. And the female cast – which includes Julia Louis-Dreyfus and Doris Roberts – is given criminally little to do or say.

A pedant might add that most of the festive activities depicted in Christmas Vacation – things like sledding and the drinking of warm eggnog – have nothing to do with Christmas in the Southern Hemisphere. 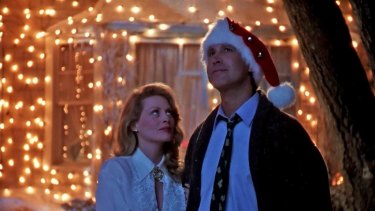 I love National Lampoon’s Christmas Vacation – just not all the time.

But the Aussie Christmas has always been a weird affair – a summer holiday built around imported, wintry iconography. We internalise this paradox when we’re young, and we run with it. So, we see nothing odd about capping off a stinking hot Christmas Day by watching movies in which people in scarves and mittens celebrate Christmas by pelting each other with snowballs.

Anyway, the white Christmas thing has always been a bit of a myth, even in the Northern Hemisphere. London, for example, is rarely blanketed in snow at Christmas. The idea that it generally is can be traced to the work of Charles Dickens, whose novels – especially A Christmas Carol – had a formative effect on the way Christmas is represented in our popular entertainments.

By a fluke of history, Dickens happened to grow up in an era that’s now known as the Little Ice Age. The first decade of his life was the coldest English decade of the last 300 years. Six of his first nine Christmases were white. In his childhood, Dickens acquired a sense that Christmas was synonymous with heavy snow. He then imposed that sense on the whole English-speaking world, and it stuck.

You could say something similar about John Hughes, the reclusive guru of 80s movie making who created the Vacation franchise, and wrote (but did not direct) Christmas Vacation. Hughes grew up in Detroit and Chicago, where it often snows at Christmas. When he started making films he reluctantly moved his family to California, where it doesn’t snow. But he kept a house in Chicago, partly so he could take his kids back every year to experience the kind of sub-zero Christmas he considered authentic.

This helps explain why Hughes’ Christmas movies – Home Alone is another one – are heavily snow-oriented. So is his classic Thanksgiving film, Planes, Trains and Automobiles, in which Steve Martin spends ninety minutes overcoming a variety of transport issues in order to get back to snow-draped Chicago in time for his idyllic turkey dinner.

In Christmas Vacation, Chevy Chase goes on an internal version of the same quest. He’s determined to give his family the perfect Christmas. But this time the elusive ideal lies in the past. The daggy dad goes searching for lost time, in an effort to recreate the kind of Christmas that his own even daggier dad used to give him.

I could go on but beyond a certain point it’s an act of bad taste to analyse a Christmas film. “They’d boo Santa Claus, this mob,” said the great rugby league coach Jack Gibson, in reference to an unusually perverse football crowd. You don’t boo Santa Claus, and you don’t overthink a Christmas movie. You just kick back and savour its defining charm, which is that you know it’s Christmas when you’re watching it.

*Only applies when seen in December, viewed out of season the movie stands revealed as a distinctly average 80s comedy.