A thrifty mother has told how she was quoted £800 for a teepee set-up and party by a professional company, but decided to create the look herself for just £60 as a surprise for her daughter.

She managed to create a stunning day by using supplies from Home Bargains, Poundland, eBay and Amazon.

‘I came up with the idea as I was thinking about what I could do to make my daughter’s 21st special and memorable as we couldn’t do the usual party or trip like we did for her sister,’ the postwoman said, speaking to money-saving community LatestDeals.co.uk. 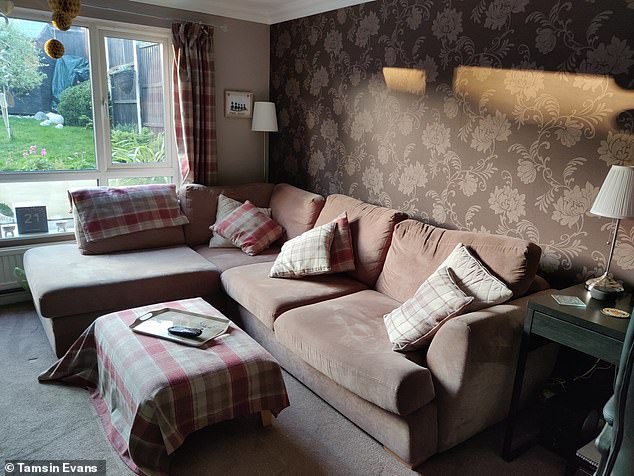 Tamsin Evans, 48, from Hertfordshire, who was quoted £800 for a teepee birthday by a professional, decided to throw her own for just £60. Pictured, the living room before 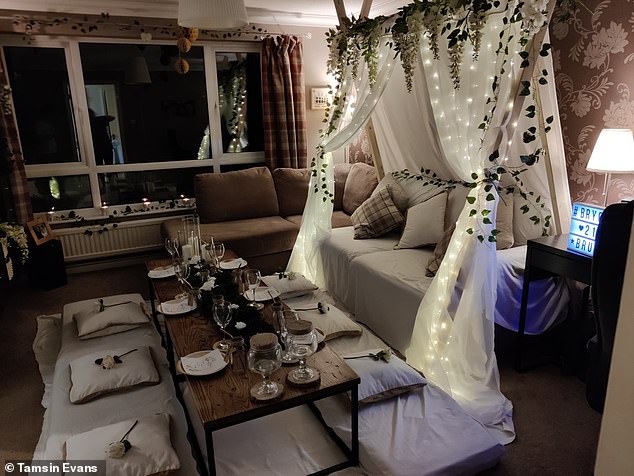 The mother-of-three decided to create the look herself on a budget as a surprise for her daughter Bryony’s 21st birthday. Pictured, the living room after 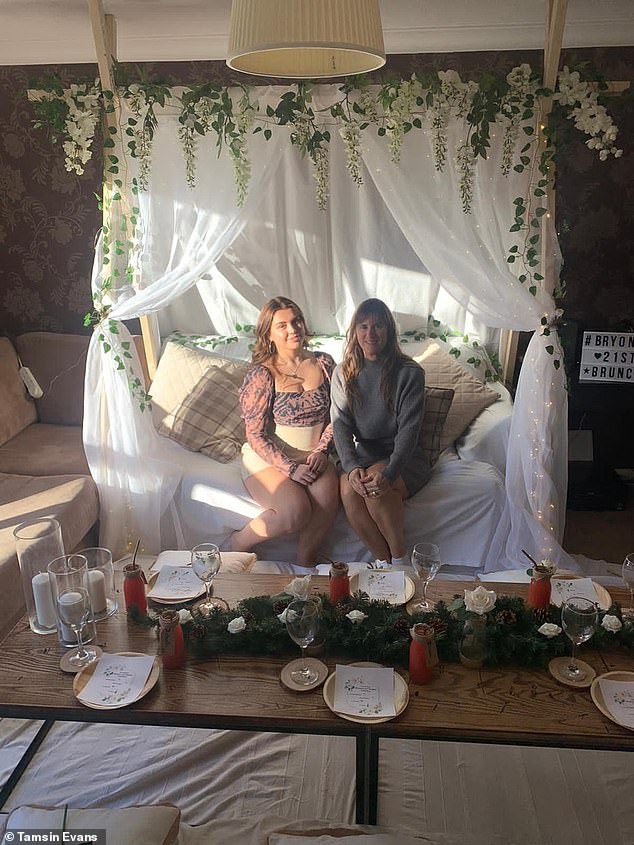 Tamsin used supplies from Home Bargains, Poundland, eBay and Amazon, and managed to create a stunning day for her daughter for just £60 (pictured, together)

Tamsin went on to say that she originally wanted to do a teepee sleepover for just the family but space and money stopped that.

‘As I was looking on Pinterest at teepee sleepover parties, I saw one that had a similar tent over their outdoor chair so I thought we could do that over our sofa,’ she continued.

‘My husband said we could use the wood we already had from building work we are doing to make the frame which we just practised the day before the surprise.

‘I used a flat double bed sheet over the back which I had and pinned it to the top of the wood with a little hanging down to hide the string used for the lights and curtains. 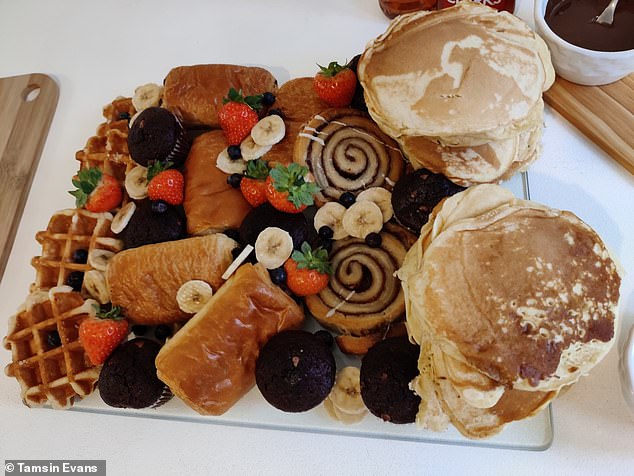 In total, Tamsin spent £60 on decorations, in addition to an extra £30 on the food from Tesco (pictured) 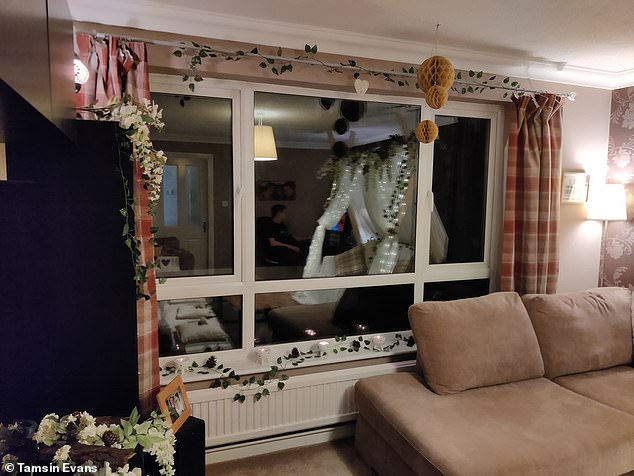 Tamsin originally wanted to do a teepee sleepover for just the family but space and money stopped that. Pictured, the living room before the birthday preparations were underway 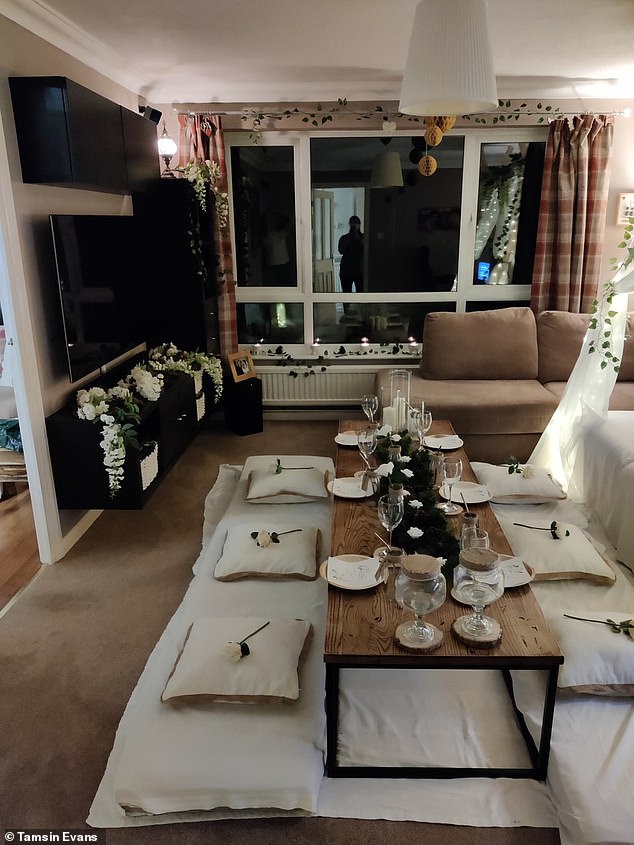 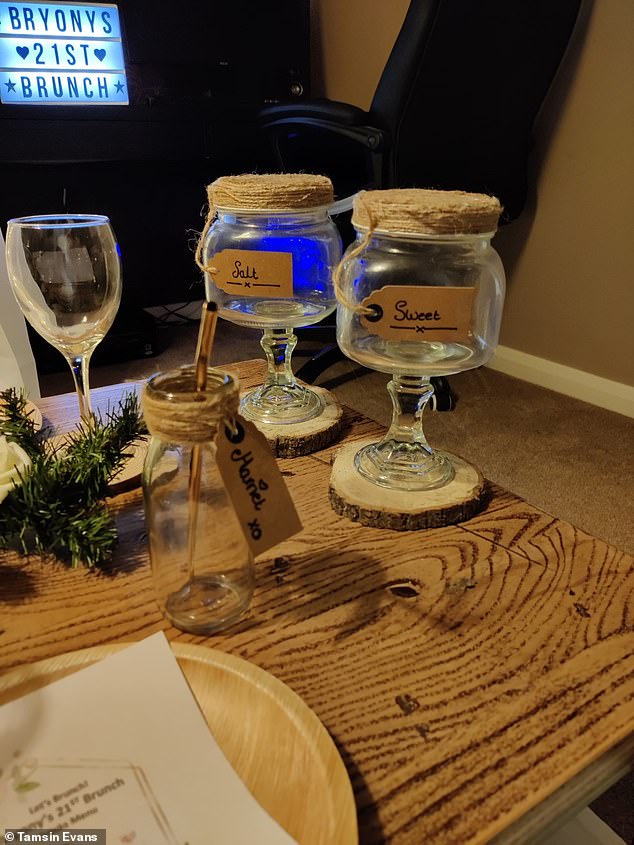 The savvy mum already had the milk style bottles and jars which she added string to and tags with the girls’ names on, which were from Hobbycraft and cost £1 for 10 (pictured)

Tamsin says the lights cost £11, while the ivy cost £6 for 12 strands – both from Amazon, while the curtains were from the bargain bin in Homebase and cost £12.50 for all three.

She also purchased six cushion covered from eBay, which set her back £12.

‘I borrowed the gorgeous hanging faux flowers from my sister and I covered my chairs in another double sheet I had,’ she explained. ‘I was going to do this the night before her birthday for the afternoon as a surprise.

‘However, when her brunch plans were cancelled in London with her siblings and cousins because of London being in tier two, her sister wanted to do it at home as we were in tier one and her cousins could still come to us.

‘She had ideas of what she wanted that she found on Pinterest which complemented my teepee idea, so we decided to do them together a couple of days early.

Tamsin continued: ‘Sadly my son couldn’t come as he lives in London and was already in lockdown but her cousins could, so to make the floor we borrowed garden cushions from my sister and covered them in more white sheets. Luckily we had loads from when my daughter was at uni.’ 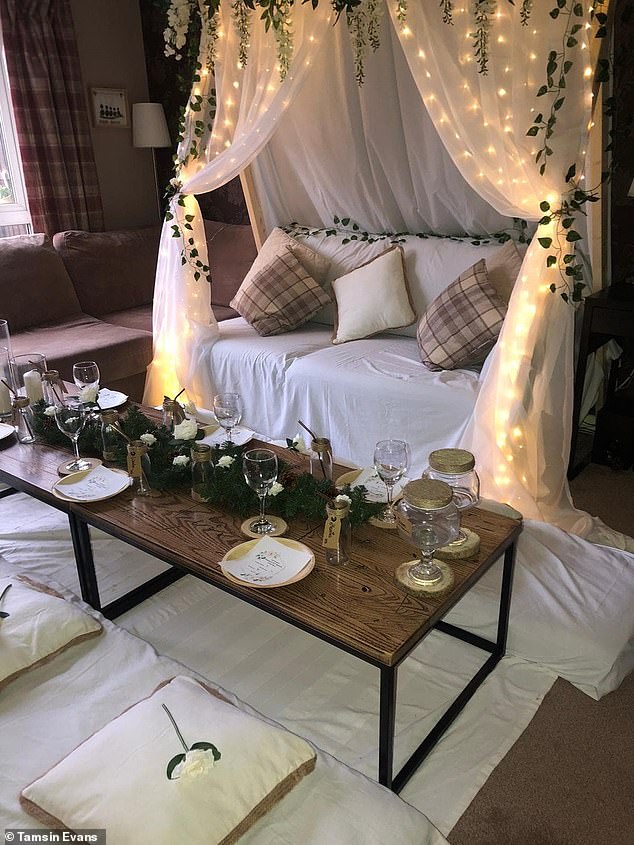 Tamsin says the lights cost £11 from Amazon, while the curtains were from the bargain bin in Homebase and cost £12.50 for all three. Pictured, the finished living room 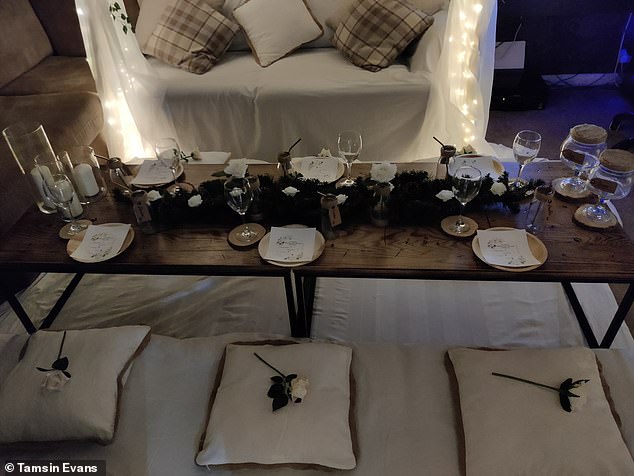 The thrifty mother-of-three purchased six cushion covered from eBay, which set her back £12 (pictured) 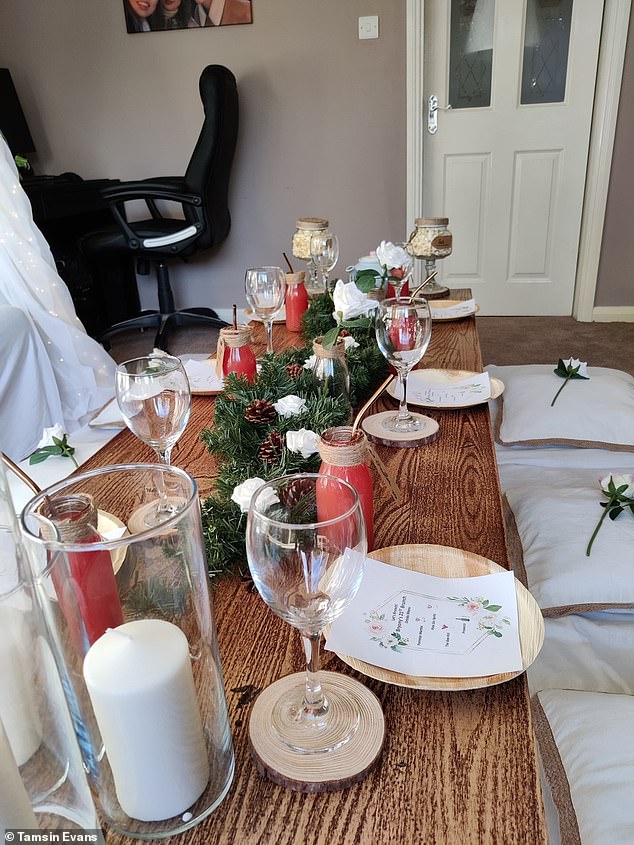 Tamsin’s daughter Wade borrowed the coffee tables from her work, while the thrifty mum already had the milk style bottles and jars which she added string to and tags with the girls’ names on, which were from Hobbycraft and cost £1 for 10.

‘We used my Christmas table centrepiece and took off the red berries and added roses which cost £2 for a bunch,’ she continued. ‘We bought another bunch of roses from Home Bargains for £2 and put one on each cushion.

‘The wooden plates were £2 from Poundland and we collected wood from my sister and tried to make placemats which didn’t work, so we bought 12 already done from Amazon for £13. We also had to buy the wine glasses for £3 from Home Bargains as I don’t drink.’

In total, Tamsin spent £60 on decorations, in addition to an extra £30 on the food from Tesco.

‘It made me feel elated that we did such a lovely job on such an amazingly small budget, and it made my daughter’s birthday,’ Tamsin explained. ‘I loved creating and finding bargains to make this special and cheap and I’m by no means creative.’

‘Her face was a picture when we showed her and she said it was better than any brunch she would have had in London!

‘I found that because of lockdown we have had to get creative and think of other ways to celebrate to make it memorable and special.’ 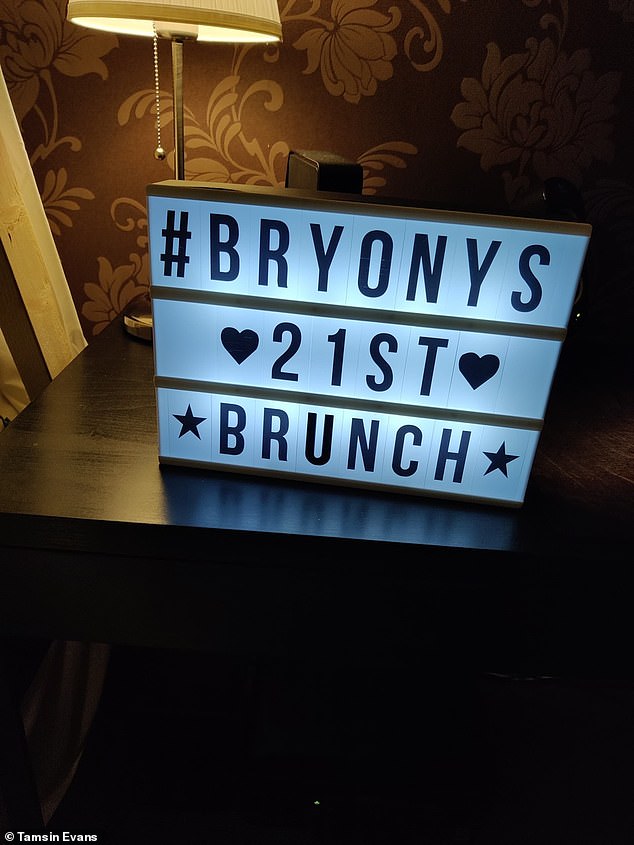 Tamsin said she ‘loved creating and finding bargains to make this special and cheap’ – adding that she’s ‘by no means creative.’ Pictured, Bryony’s birthday sign

‘I enjoyed getting a glue gun that I bought especially for £2 from Poundland and craft stuff which I used to enjoy when my children were young.

‘Although I got stuff in shops because we have been allowed out, I did find bargains online as well.

‘Once I decided I wanted to do this I made notes and lists of stuff I needed to make it happen and always kept an eye out for the bargains. Plus, if you want to do the same, my advice would be to let the idea evolve as it goes along.

‘For example, I spoke to my sister about it and listened to her suggestions on how she’d do it, which were very helpful!’

Tom Church, co-founder of LatestDeals.co.uk, commented: ‘Professional teepee party planners might take all the hassle out of planning a party, but they’ll also take a huge chunk out of your bank balance!

‘It’s much more special – not to mention cost-effective – to create your own teepee party at home. Home Bargains, Poundland, B&M and ebay always have loads of amazing party supplies on a budget!’