Prime Minister Scott Morrison is ready to announce a royal commission into veteran suicides after Coalition MPs urged him to heed growing calls for a more powerful inquiry into the problem.

With government MPs breaking ranks, Mr Morrison is telling colleagues he is prepared to act on a likely vote in Parliament on Monday demanding a royal commission. 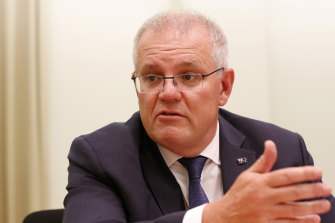 The move could break a deadlock over the government’s attempts to appoint a national commissioner for veteran suicide prevention, setting up two forums to investigate as many as 500 deaths over recent decades.

Half a dozen Coalition MPs told Mr Morrison they would cross the floor in the lower house on a call for the royal commission, after the Senate last week passed a unanimous resolution calling for one.

The vote in the lower house is expected soon after midday on Monday, sending a signal to Mr Morrison to drop objections to the royal commission after more than a year of debate.

Labor veterans affairs spokesman Shayne Neumann called for a royal commission in late 2019 and said the government’s proposal for a national commissioner was “friendless” among the families of those who had taken their lives.

“And the situation is getting worse, the numbers are increasing, and I think the problem is under-reported.”

Mr Neumann said the Prime Minister had no alternative but to act on the motions in the Senate given concerns the national commissioner would not have enough power to force change to help veterans.

“It lacks scope, independence and resources, so it’s not as good as a royal commission,” he said.

The government proposed the national commission model in February 2020 but has been unable to get the bill through the Senate because crossbenchers including Tasmanian independent Jacqui Lambie, a former soldier, wanted the royal commission.

While the government named Dr Bernadette Boss as the interim national commissioner for Defence and Veteran Suicide Prevention last year, it has not been able to legislate her powers.

The government accepts the House of Representatives is highly likely to vote for the royal commission on Monday, although this is a largely symbolic motion rather than a bill to create the inquiry.

This does not mean the national commissioner will be abandoned, however, as some in the government argue for the position to be kept as an ongoing institution while acting as swiftly as possible to hold the royal commission.

Support is available from Lifeline: 13 11 14 and lifeline.org.au