Millionaire who started from nothing and now runs four successful businesses promises single mother-of-one who lives on £60 per week she’ll be there for her ‘every step of the way’ as she plans to open a floristry on Rich House, Poor House

A millionaire promised a single mother she’d do anything to help her business venture succeed after a life-changing episode of Rich House, Poor House.

Debi Clark, from Kent, is a multi-millionaire who overcame adversity to create a thriving children modelling business, and now owns a listed farmhouse where she lives with her dogs, following the untimely passing of her husband Bob.

Meanwhile, single mother Geri lives on £60-a-week in a small ground floor flat in Rochester with her daughter Scarlet, who is studying for her A levels.

In tonight’s episode of the Channel 5 show, the two women swap lives and budgets and after living in Geri’s shoes, Debi, who appears on the show with friend Sarah, promises she’ll be there for her every step of the way as she creates her own business – even booking her onto a training course. 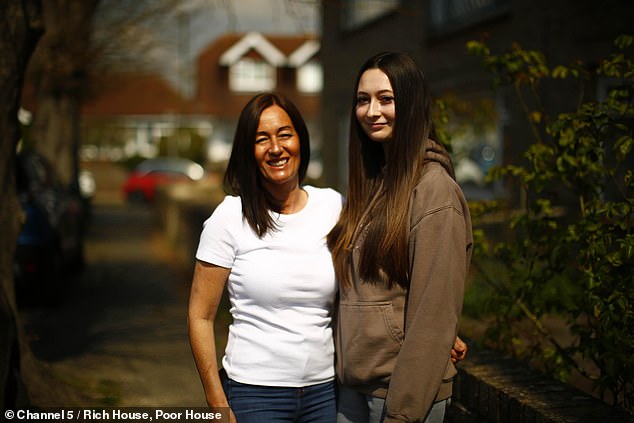 Geri Hobbs is a single mother from Surham-on-Sea, near Rochester, who struggles on £60 a week budget. She appears on tonight’s Rich House, Poor House on Channel 5 with her daughter, Scarlet  (pictured) 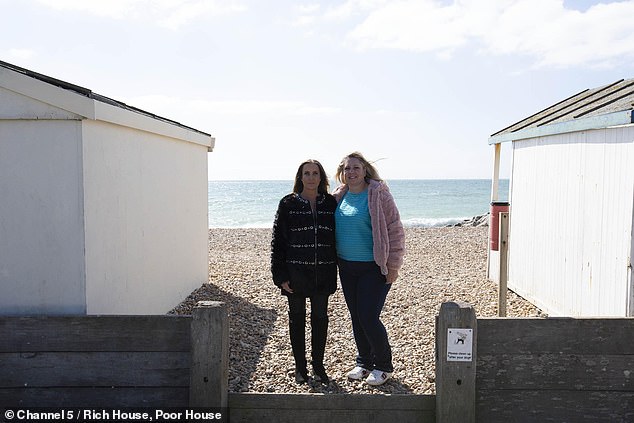 Debi Clark, from Kent, is a self-made millionaire who owns four business and has a disposable income of £1,520 per week. She appears on the show with her friend Sarah (pictured)

Debi, originally from the East End, explains how she started her child modelling business in 1996 and now has £1,520 of disposable income per week.

‘I wasn’t born with a silver spoon in my mouth, nothing like that as you can probably tell from the accent,’ Debi jokes.

‘I’ve had a 100 of jobs, literally. I used to make false teeth at the royal dental hospital, I used to sell encyclopedias all over the country, I’ve done a lot of jobs.’

But after falling pregnant with her daughter Sadie when she was ages 19, Debi says she struggled financially, and had so little money, she couldn’t pay for hot water and was showering at her mother’s house.

Debi says how her first successful business allowed her to form other ventures over the years, including a luxury attire for dog business, a cosmetic line, while she’s also a certified nail tech – and she now owns a villa in Spain in addition to her house in the UK.

But devastatingly, both her husband Bob and mother passed away in 2020. To overcome her grief, Debi explains how she turned to work, and now works across four projects at the same time, with little time to relax.

‘I have to keep doing things, I don’t know why,’ she admits. 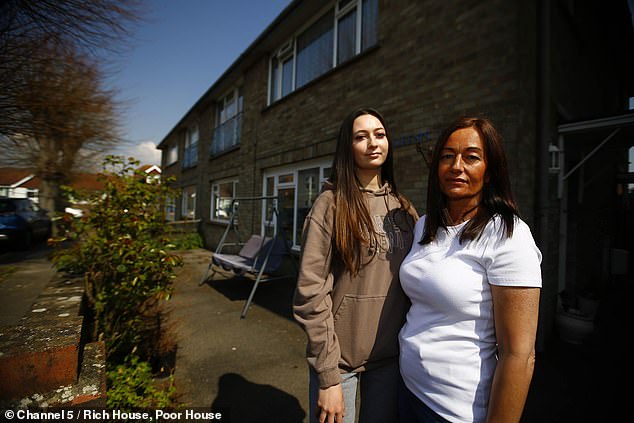 Geri always built her career around Scarlet and now that her daughter is older, she’d like to start her own business

Meanwhile, near Rochester, Geri explains how she raised her daughter Scarlet alone after she separated from her father when Scarlet was four.

The single mum has always put her daughter first, and says she’s been looking for ‘mummy jobs’ that she can fit in around the school run.

The pair, who have lived in eight different homes in the past ten years, have even been homeless.

Geri now works part time as a cook in a children’s nursery, and also cares for her sick father Peter.

‘My granddad says my mum is a butterfly, someone who goes from place to place, who hasn’t really settled yet,’ Scarlet says.

Geri, who has just finished a floristry course, explains how she hopes to one day open a café that sells flowers.

‘It’d be such a lovely atmosphere to have a coffee with all the smell of the flowers,’ she says.

And with Scarlet now studying for her A-levels, Geri has more time for herself.

‘I’m really proud of Scarlet and I’d love her to get to university,’ she explains. ‘I feel when you are on minimum wage and living this way, it’s a trap, once you’re in it, it does seem almost impossible to get out of.’ 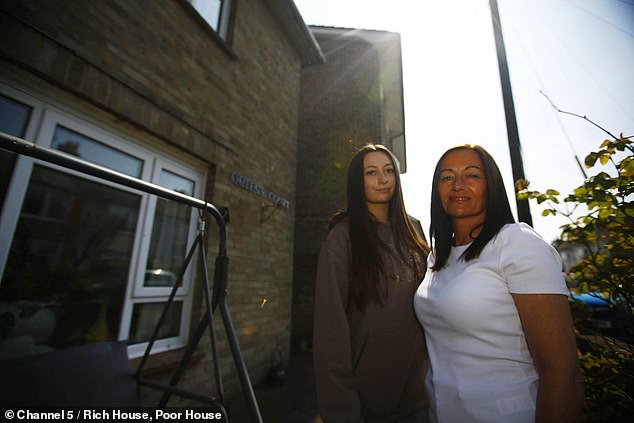 The single mother has been moving from flats to flats and was even homeless, raising her daughter after separating from her father when Scarlet was four

‘I do really feel I’ve got that bit more freedom, I can leave Scarlet on her own, over the last few years, it’s my time now.’

Debi’s best friend Sarah says she hopes the experience will allow her pal to relax.

‘I hope that towards the end of the week, when she gets used to it, I hope she’ll enjoy slowing down a bit,’ Sarah says.

And when the two families do swap, Scarlet is quickly taken by Debi’s lavish home.

‘If I lived here, I would definitely throw parties, invite everyone I know,’ she enthuses.

Meanwhile, Sarah is not so enthralled by the £60-weekly budget, but confident she and Debi can make it work.

‘We’ll manage, we’ll manage on the budget, we’ve just got to be careful,’ she says.

As she learns more about Debi’s business and drive, Geri is increasingly inspired to follow in her footsteps.

‘It gives me inspiration that she’s got so many businesses that she’s made successful from an idea. She must have a lot of drive to do that,’ she explains.

She meets with Sadie, Debi’s daughter, who admits her mother never stops working – adding that she started her business ‘from nothing.’

Debi’s agency, Bizzy Kids, is now a leading agency in the UK, which has received several awards.

In Surham-on-Sea, Debi is tasked with buying and cooking a dinner for Geri’s dad Pete, who comes around to stay hello. 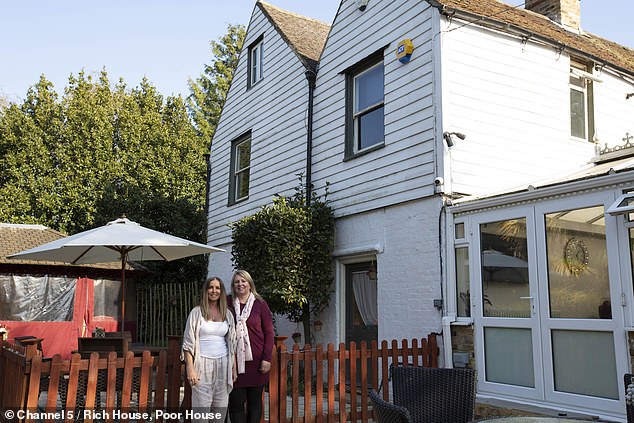 Debi, pictured, is used to a life of luxury and lives in a grade listed farmhouse in Kent, but she wasn’t born with a silver spoon in her mouth, she says

He tells her a bit more about Geri’s story, and admits she’s struggling to choose a craft to start a business in.

As the episode progresses, Debi grows determined to help Geri, but admits she needs to know more about what she wants to do.

‘She knows she needs something to improve her life to where she’d like to be,’ she says. ‘I can help her to do it but not if on Monday it’s going to be floristry and then by Wednesday she’s going to want to be picking nails.’

The penny starts to drop for Geri as well, who is left wondering whether she’s been self-sabotaging.

‘I think I’ve probably used the learning and courses maybe as a bit of self sabotage, of keeping myself from starting a little business in something that I want to, because maybe I’m scared of failure,’ she admits.

Throughout the week, both women learn more about the other, with Debi stepping into the daily life of Geri by going into her workplace.

After hearing Geri is a ‘reliable’ and hardworking woman, she is increasingly keen to help, while staying by the sea, where life is more peaceful than her regular jam-packed schedule is also a wake up call for both Debi and Sarah.

‘If it wasn’t for family, I could go to Spain and not look back,’ says Sarah. ‘Living in Geri’s life, in comparison to the fast lane, the fast-paced life that I live, if I could slowly release myself from that, and meet halfway somehow, I think that’d be perfect,’ she says. ‘I’d go to Spain with my makeup bag and my bikini.’

Meanwhile, Geri realises the life of a millionaire is busy as she jumps from one task to the next to fulfil the varied demands of Debi’s businesses. 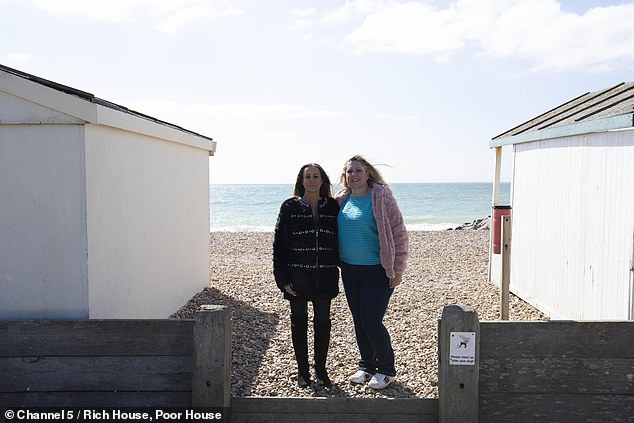 During the show, Debi, pictured with Sarah, realises she is working too much and needs to take time for herself

She spends the last night relaxing in Debi’s hot tub, before the next day’s return to reality.

‘I feel like I know you already,’ Debi says when the two women meet. ‘I can’t thank you enough for staying in your place, it’s lovely and it’s so peaceful, what a beautiful area.’

And the millionaire doesn’t wait long to discuss Geri’s career.

‘I tried to get to the bottom of where you want to go and what you want to do,’ she says.

Geri admits: ‘I never stick with one thing, I’d really like in the end, in a couple of years, to open a café with a florist.’

But Geri admits she’s nervous because she’s never done a business plan before.

‘The first thing I’m going to offer you is a business study course, which will teach you how to create a business plan,’ Debi says. ‘You might do the course and think “its not for me, I’m gonna get a job”.

Geri, who is motivated by the proposition, says: ‘I think this is just what I need. I need someone to be able to talk to about, someone behind me, somebody to tell me what to do, really, to boss me about.’

Meanwhile, Debi is ready to slow her pace down and enjoy life a bit more.

‘I’m hoping that this experience and how I feel now kind of sticks with me in the same way, even if it’s just for the next six months’, she says.