Home » Lifestyle » Mental illness is so stigmatised, I sometimes wish my son had had cancer

My 21-year-old son was diagnosed with severe mental health issues in early 2016. After 32 weeks in hospital over 12 months, plus several misdiagnoses and incorrect treatments that nearly killed him, we finally received a diagnosis that seemed to fit: a severe and unusual form of OCD exacerbated by pre-verbal trauma from the effects of extreme prematurity.

So the past few years have been difficult. Yet, on top of the huge stress of having a child in hospital for months with few answers, we noticed that many friends dropped away. 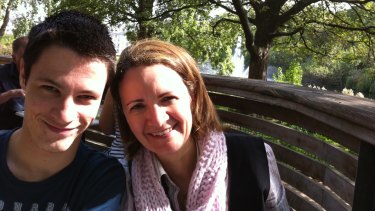 Jennie Hill and her son.

A group of women I’d been close to since our kids were in kindergarten disappeared. Some local friends I’d thought were solid went AWOL. And although a few people were kind to us and kept in contact, these tended to be those who’d had similar experiences rather than ones I’d have expected to show up. So many people were terrified of talking to or about our son, as if what he had was catching.

And then came Christmas. We spent the day at a relative’s home, and it almost defeated us. Only one person asked us (or him) how he was. He sat alone or talked to his brother and sister, and in the car on the way home a dejected voice from the back seat said, “Didn’t they know I was in hospital?” I don’t remember my reply – some platitude, probably – but I was heartbroken. Especially as there’d been deep discussions over lunch about someone else’s knee reconstruction, and other people’s health issues.

Four days later, my husband and I went to a funeral for an elderly relative. Once again – in the company of dozens of people I knew well – nobody mentioned our son. They knew he’d been terribly ill as they were kept informed by others.  It was as if our son had just … disappeared.

If you are ever in this position – it can happen to anyone with little warning – your faith in humanity will take a severe shake.

And we felt as if we’d disappeared, too.

Though you might think those close would be terrific, you’re likely to be wrong. Mental illness tests people in ways in which you – and they – have no prior idea. If you are ever in this position – it can happen to anyone with little warning – your faith in humanity will take a severe shake.

Of course, all this happens just at the time you need more, not less, connection. You’re desperate for empathy and care, yet not only does this disappear from your personal life, it’s absent from institutions too. I’ve never found any organised non-medical support for us or our son in Australia’s health system, for example, and I’m good at looking for it. 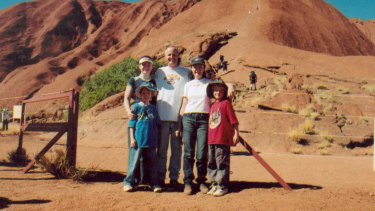 Jennie Hill and her family on a holiday when her children were younger.

I know Australia’s health system is considered excellent but in many critical ways, mental health is a disgrace. In particular, any care for the allied needs of the ill person and their family are non-existent.

This month, Victoria’s Royal Commission into Mental Health first convened. Chair Penny Armytage was interviewed on TV and spoke of one family in particular who’d affected her. They’d had one child who developed cancer, and another struck down with serious mental health issues at a similar time. And they’d noticed that while the child with cancer had received enormous support and easy-to-follow treatment plans, this wasn’t the case with the sibling.

On the contrary, navigating systems had been almost impossible, and to this was added the stigma and ostracism also experienced from their family and friends.

When I heard this, I cried. Because just to hear someone say they care about what it’s like to cope with chronic psychological issues in a family is rare. And the main thing families battling these conditions experience is … silence. In most cases, a family struggling to assist such a child become secondary victims themselves.

Three years after our son first became sick, we’re still taking it day by day and are still shaky. We shouldn’t still be in crisis, but in effect we are. This is hard to write and feels shameful, but it’s the truth.

Luckily, my husband and I are close and can support each other and our children, and they’ve supported us, too. We were also able to pay for some counselling help. But our family became, and remains, far more isolated than before.

Nor is Australia alone in this: it’s situation normal everywhere. I laughed aloud recently when I saw a book written by a mum in the US, titled No Casseroles for Schizophrenia. It’s so damn true. If you have a child with these illnesses you’ll be lucky to hear from many people again, let alone have them bring you a meal.

I’m also ashamed to say there’ve been times I wished my son had cancer instead. Because after assisting family and friends through cancer, I’ve some idea of the concern that tends to wrap around them. I know that’s a terrible thing to say, but the craving for empathy is real, and the needs of a family with severe mental illness in its ranks can be as great – or greater – than those with other diseases. Particularly as long-term survival rates for some psychiatric conditions are lower than for many cancers.

We’re lucky that after three years of intensive treatment, our son is doing a little better. For many families even this respite is unheard of, or they lurch from crisis to crisis for decades, or the battle ends in suicide.

For this reason I desperately hope this Royal Commission (and everyone involved in this field) will look at all aspects of mental illness treatment, not just acute medical care. I hope those responsible for change are able to gain a sense of how the families of mentally ill Australians suffer along with their unwell spouse, child or sibling. And I hope they’re is able to come up with concrete solutions, since my greatest wish is for others not to go through what we have.

I would have liked to tell them all this myself, of course, but I was too exhausted to get in touch.