More than 20,000 homes and small businesses would be added to a renewable energy drive that has been credited with reducing emissions by 5 per cent in the inner city and generating 140 jobs, under an ambitious council election pledge.

The bold energy plan is the brainchild of Melbourne lord mayor aspirant Arron Wood, who is challenging incumbent Sally Capp for the top job. 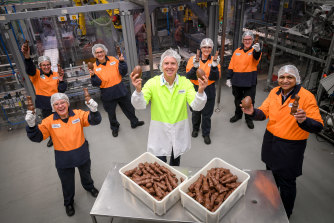 If elected, Cr Wood said he would extend the City of Melbourne's renewable energy plan from big businesses and organisations to households and small businesses.

"With the huge economic impact of COVID-19, it's probably easy to say we can't be green when we're in the red, but what [this] will deliver is a reduction in energy costs for businesses and residents at a time where any saving is money in the pocket to invest."

Under the first and second incarnations of the Melbourne Renewable Energy Project (MREP), businesses, councils and universities pooled their electricity needs and agreed to go direct to market to buy renewable energy, rather than procuring their own renewable energy supply.

The first stage of the project – launched in 2017 – facilitated the construction of a purpose-built 39 turbine, 80 MW wind farm at Crowlands, near Ararat.

In July, a second deal brokered by the City of Melbourne secured a 10-year agreement between seven partners, including RMIT Univeristy and Mondelez International (which owns Cadbury), to buy renewable energy from Yaloak South wind farm near Ballan, west of Melbourne, via retailer Tango Energy.

The second MREP agreement means wind will now power landmark city buildings, including the Strand Arcade, the GPO and the Capitol Theatre.

"It was a big leap of faith for the 14 organisations involved in MREP 1, but ultimately we were successful in driving the development of a new wind farm in regional Victoria outside Ararat," Cr Wood said.

"Not only did it result in many of the group going 100 per cent renewable energy for their operations, it created 140 jobs in the process. So, it’s good for the environment and great for jobs."

"It brings together a collection of customers who will go and buy the output of a renewable energy project," he said.

"I represent a lot of renewable energy companies who have got projects that they've identified that they're wanting to go ahead and build. But what they're often lacking is the customers who will agree to essentially purchase the output. So, what it does is brings together a collection of customers and essentially connects them up with a renewable energy company who want to build a project, and by virtue of that it gives the renewable energy project the confidence and the backing that they can go ahead and build the project."

If elected as lord mayor, Cr Wood said he would extend the scheme to four rounds per year, with two open to residents taking part in a bulk purchase of renewable energy and two to small businesses.

The beauty of the scheme, he said, was it took the "headache" out of securing renewable energy for households and small business owners.

"Over 80 per cent of City of Melbourne residents live in apartment towers and so the ability to deliver significant solar on rooftops with small roofs relative to their energy use and potential for overshadowing isn’t realistic, and, as an administration, we have to set the tone and make renewable a priority."