Home » Lifestyle » Meghan McCain reveals why she quit The View

‘The View’ is in no rush to replace Meghan McCain

Meghan McCain says she quit “The View” because she felt her colleagues, including Whoopi Goldberg and Joy Behar, had mistreated her for having conservative views — all while she was suffering from postpartum depression.

“You can’t imagine how it messes with your self-esteem working in an environment where the worst thing you can be in the world is a Republican during the Trump years,” McCain wrote in an expert of her new audio memoir, “Bad Republican,” obtained by Variety. “As the country got worse under Trump, the treatment from Whoopi, Joy and some of the staff grew meaner and less forgiving.”

She continued, “It was as if I had become an avatar for everything they hated about the president. It felt like the co-hosts and staff only knew one Republican — me — and took out all their anger on me, even though I didn’t even vote for Trump.”

McCain, 36, said Goldberg, 65, had her back when she first started at the ABC show, but that all changed after two years when she felt the EGOT winner had turned on her.

“The thing about Whoopi, though, is that she yields so much power in culture and television, and once she turns on you, it can create unfathomable tension at the table,” McCain wrote. “I found her open disdain for me more and more difficult to manage as the years went on and it became more frequent. Occasionally, if the show’s political discourse veered into territory that she found disagreeable, Whoopi would cut me off, sometimes harshly.”

She also felt criticism from Behar, 79, who once questioned how McCain could remain a Republican while Donald Trump had bashed her late father, Sen. John McCain.

“After my dad died, I heard Joy had told others at ‘The View’ that she couldn’t understand how I could still defend Republicans after everything Trump had done to me,” she wrote. “Why was that something she had to worry about? I could separate the two. I could separate Trump from being a Republican.” 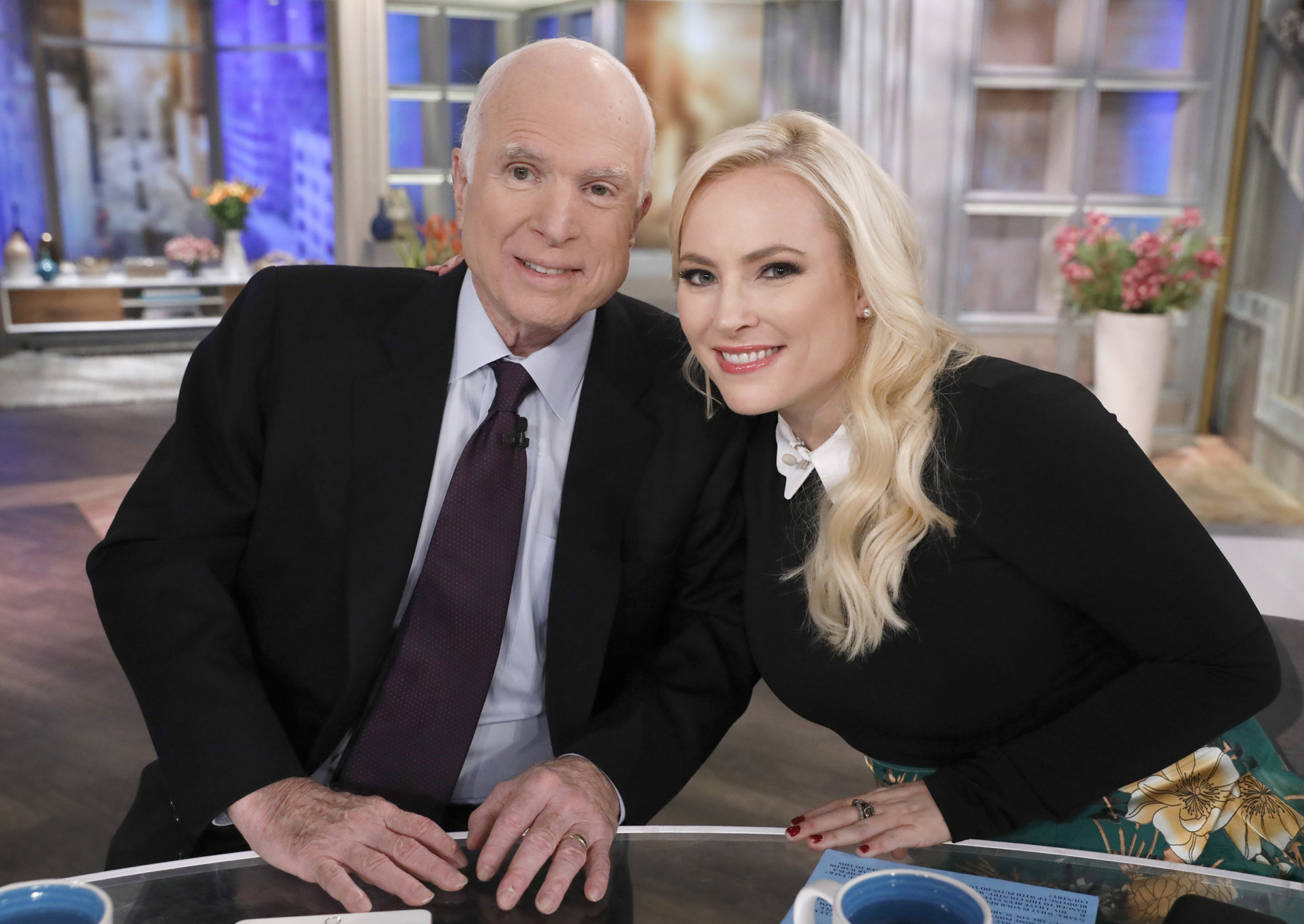 And while she said she was able to endure “plenty of shade” and “toxic, direct and purposeful hostility” at first, that all changed after she gave birth to her first child, daughter Liberty, in September 2020.

McCain said that when she returned from three months of maternity leave, she experienced postpartum depression, which made her co-hosts’ scathing actions that much harder to take.

“As I was dealing with my own emotions, I couldn’t also navigate the idea that I was hated and felt hated at a toxic work environment,” she said.

She noted one instance on her second day back from leave where she got into an on-air squabble with Behar.

“To make light of things and to ease the tension, I said, ‘Joy, you missed me so much when I was on maternity leave! You missed fighting with me!’

“Nothing anyone has ever said to me on camera since I have been giving interviews since I was 22 years old ever hit this hard,” McCain said. “I felt like I’d been slapped. She yelled out at me sharp and intensely and I believed her. Now, I know I’m not always a perfect angel, but I would never speak to any woman that way who had just returned after giving birth.” 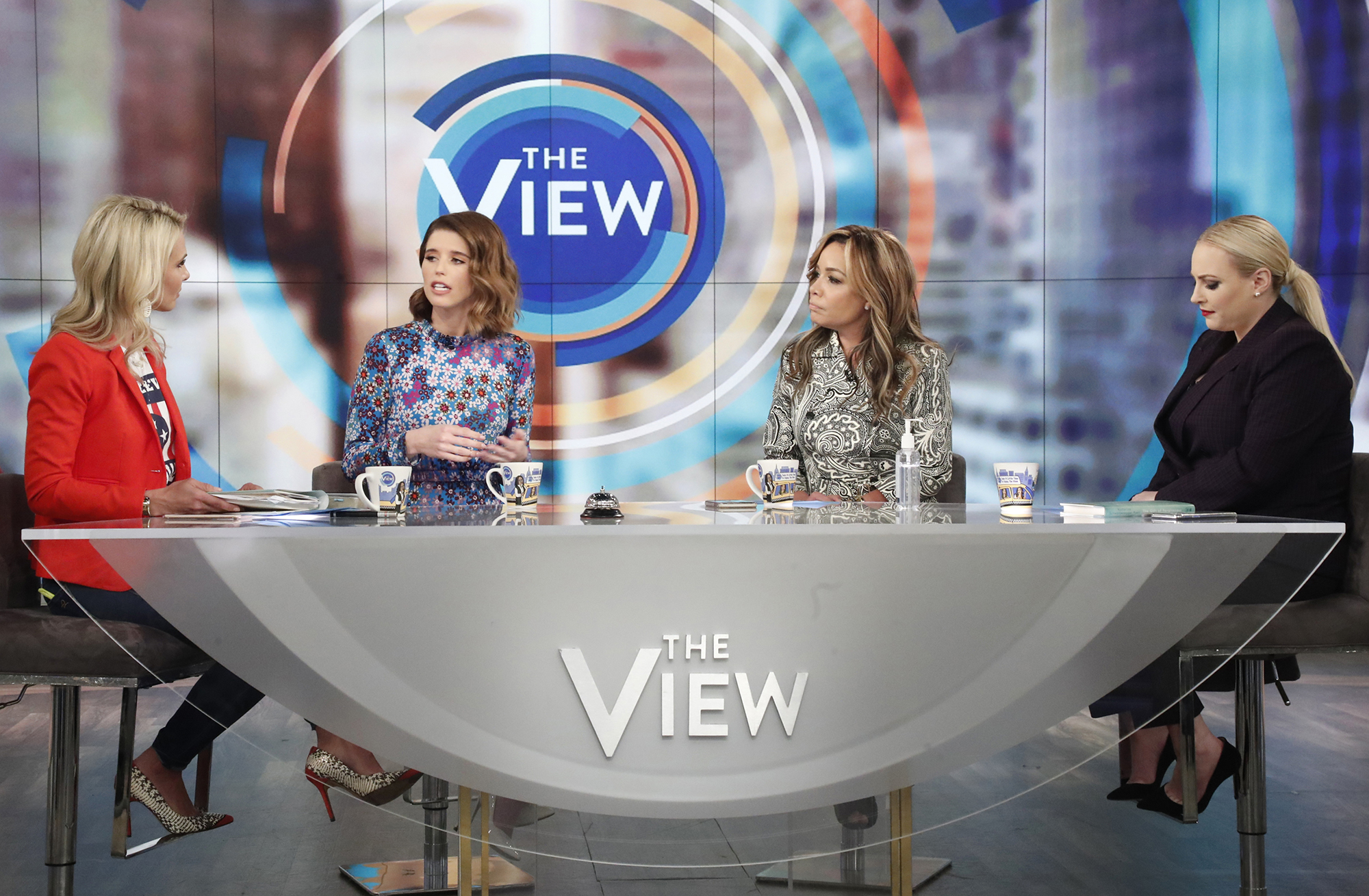 McCain said that she burst out into tears when they broke for commercial and felt her breasts begin to lactate.

“I was embarrassed and shaking. I felt like I wasn’t in control of my body. I didn’t want millions of viewers to see that,” she said, adding, “That experience of crying and leaking and trying to pull it together in seconds so I could go back on-air with women who appeared to hate me was an intensely heartbreaking experience.”

She realized in that moment that “this s–t isn’t worth this,” adding, “Nothing in life is worth this.”

The experience made her realize that the bigger issue is the way women are treated in the workplace.

“I want ABC to change. But I want change in America too, starting with giving pregnant women paid maternity leave,” she said. “Corporations should not be allowed to say, “We support women, blah blah blah, but if you have a baby, we’re not going to support you. These companies spend millions of dollars a year trying to convince consumers of their high moral values, but how many of them actually walk the talk? It needs to change.”