Over the course of 27 films and five Disney+ series, there are many iconic scenes in the Marvel Cinematic Universe to choose from. Some might think it would be hard for Kevin Feige, the President of Marvel Studios who has produced every MCU project, to pick a favorite moment. However, he knows which scene stands out among the rest to him.

During a press conference for the Marvel Disney+ show Hawkeye, Kevin Feige discussed Clint Barton’s role as a mentor with ComicBook.com. In doing so, he revealed that one of his favorite MCU scenes is a moment between Clint and Wanda Maximoff in Avengers: Age of Ultron.

“There are moments within all of Jeremy’s appearances where you see this mentor under the surface,” Feige shared. “This reluctant hero, this reluctant mentor under the surface. One of my favorite scenes in all of our films is the scene with Clint and Wanda in Sokovia. Where he basically says, ‘When you go out that door, you’re an Avenger.’ And motivates her to join the fight.”

He continued, “And that was the kernel of how we could connect our MCU incarnation of Clint Barton into the Matt Fraction storyline in relationship with Kate Bishop.”

Avengers: Age of Ultron is not among many fans’ favorite Marvel films, but Kevin Feige’s favorite scene is memorable. And it undoubtedly sets up Clint Barton’s character arc in Hawkeye. 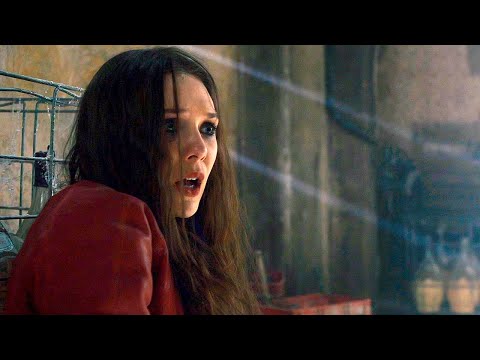 Jeremy Renner’s future at Marvel is unknown, but Kevin Feige has made it clear that he would love to see the actor in future projects.

“We want to see more Jeremy Renner,” Feige said. “And that goes back to the earliest days. We are both grandfathers now of the MCU. And the trust that Jeremy had to jump into the MCU before moderators said things like ‘welcome to the MCU.’ It was, ‘Hey do you want to do this thing with us? It would be pretty cool, and I think it could be neat.’ And he said yes, and then he won an Academy Award, and he still said yes. And I thought that was pretty cool.”

Renner has played Hawkeye in the MCU since his cameo appearance in Thor in 2011. And although it took 10 years for him to get his own series, Clint Barton has been integral to shaping the MCU. Hopefully, Kevin Feige will bring the character back for more Marvel projects. Perhaps the studio will greenlight Hawkeye Season 2.

To further support Kevin Feige’s notion that he and Jeremy Renner are the grandfathers of the MCU, the Marvel actor called himself “the MCU dad” during an interview with Variety.

“If you look at all of Clint’s relationships … It’s been with Wanda and getting her convinced to put her boots on and go be an Avenger, or if it’s with Natasha all through this thing,” Renner said. “Now with Hailee [Steinfeld], it’s that same thing. Maybe he’s just the MCU dad. Maybe that’s his superpower.”

The Hawkeye actor added, “I think really cementing what Clint Barton’s superpowers are … Obviously, he’s not the flashiest of all the Avengers. But here’s the coolest thing: he has heart, his family, his tenacity. Heart will get you much further than the greatest skillset.”

Avengers: Age of Ultron and all six episodes of Hawkeye are streaming on Disney+.