Australia’s peak big business and union groups have jointly called for public health orders governing whether staff must be vaccinated against COVID-19 rather than leaving the decision up to individual employers.

Guidance released by the Fair Work Ombudsman on Thursday outlined which businesses were likely to be able to mandate coronavirus jabs for employees but did not offer firms legal protection from any industrial or discrimination claims that might arise. 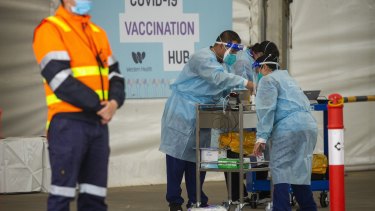 Unions and big business want clear, national rules on jabs, which they say should be overwhelmingly voluntary.Credit:Paul Jeffers

Fruit and vegetable processor SPC this month became the first Australian company to order staff to be vaccinated while other major companies surveyed by this masthead have said they preferred to focus on encouraging employees to get the jab.

The Business Council of Australia, whose members include companies such as Woolworths and National Australia Bank, and the Australian Council of Trade Unions, which represents the country’s 1.5 million union members, said on Friday the overwhelming majority of Australians should be able to choose whether to be vaccinated.

But they recognised that for a small number of high-risk workplaces, there might be a need for all workers to be vaccinated to protect community health and safety.

“These are serious decisions that should not be left to individual employers and should only be made following public health advice based on risk and medical evidence,” they said in a joint statement.

The federal government’s official policy is for vaccination to be voluntary. Ministers including Prime Minister Scott Morrison have said mandating vaccinations was a subject for the states and emphasised legal advice that left the decision to individual businesses.

But Queensland Premier Annastacia Palaszczuk rejected that stance on Friday, urging the federal government to discuss the issue with unions and businesses.

“It’s a federal issue and I think the ball is in the Prime Minister’s court here, with all due respect,” she said.

Former prime minister Tony Abbott also weighed into the debate, saying the government should step in to provide more clarity so the issue was not decided in the courts by “unaccountable and unelected judges”.

“My instinct would be to have more clarity from government and less that ends up in the hands of a disparate group of judges and officials,” Mr Abbott said in a podcast for the libertarian Institute of Public Affairs.

Businesses are concerned that by mandating jabs without a public health order they might breach state or federal anti-discrimination laws.

Barrister Kate Eastman SC said the choice not to be vaccinated in and of itself was not protected by discrimination law.

“We’ve got some clarity in our discrimination law that I think confirms that whether you’re vaccinated or not vaccinated is not a protected attribute,” Ms Eastman said.

The four tiers of work in the FWO advice

But she said issues of discrimination could arise where an employers’ general vaccine mandate disadvantaged some people more than others because of characteristics that were protected, such as disability or pregnancy. In Victoria and some other states, religious belief is also protected.

Emily Howie, legal director at Victoria’s Equal Opportunity and Human Rights Commission, said even where a decision appeared initially discriminatory, it could be lawful where it was “reasonably necessary to keep the workplace safe”.

That test depended on factors such as whether social distancing was possible, employees’ vulnerability to COVID-19, whether customers came into the workplace and the availability of vaccines.

Ms Howie said if a case got to court, a person objecting to vaccination would have to show some evidence that they had a protected characteristic, such as a disability or religious belief, and that it prevented them from being inoculated.

Overall, Ms Eastman said, “I think it’s going to be very difficult for one individual person to come along and say, I’ve suffered discrimination or adverse action in the context of a public health emergency”.

But she said employers could push measures too far if they were, for example, to require staff working from home with limited interaction to get vaccinated.

Fair Work’s new four-tier guidance says people working from home are least likely to face mandatory workplace jabs while businesses on the front line such as border control or healthcare were “more likely” to be allowed to require vaccinations.

The Australian Human Rights Commission rejected interview requests and did not answer written questions, although it has some general guidance online.