All new residential and office buildings with off-street parking should be forced to include electrical cabling for future vehicle charging, industry experts say, to ensure Australia can make a smooth transition away from petrol and diesel cars.

The uptake of battery electric vehicles is poised to rapidly increase in the coming decade as state governments offer thousands of dollars in incentives and subsidies and the most populous states aim for EVs to make up 50 per cent of all new car sales by 2030 as part of their efforts to reduce carbon emissions in the transport sector. 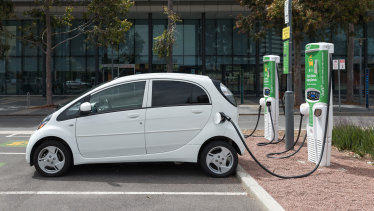 But electric car advocates argue the biggest factor discouraging their purchases remains driver anxiety about access to charging stations and a lack of investment in charging infrastructure because of Australia’s slow uptake.

The federal government will release its Future Fuel Strategy, aimed at the long-term phase out of petrol and diesel vehicles, in the coming weeks as part of its emissions reduction efforts to meet its international obligations.

Most car trips in Australia remain short, with 99 per cent of people’s daily commute well within the range of a typical electric vehicle battery. It means most battery electric vehicle drivers can charge their car at home, or potentially at work if a car space is provided, rather than needing to rely on widespread public charging stations.

But potential owners who live in apartments, who rent, or who do not have off-street parking find it difficult to charge a battery electric vehicle at home. Forecasts from motoring groups suggest that unless those access issues are solved, electric vehicles may struggle to grow beyond about 60 per cent of the fleet.

Ross De Rango, the head of energy and infrastructure at the Electric Vehicle Council, said the transition from petrol and diesel cars to electric vehicles would create many new challenges and requirements across our economy.

“The key new requirement will be the ability to recharge the vehicles at times and places convenient to the drivers, without placing undue strain on upstream electrical infrastructure,” he said.

“The model of routinely attending a petrol station will give way to a future where the majority of vehicle refuelling is done at the home or the workplace, with high-power fast charging at public locations filling in the gaps.”

He warned there were still many issues facing drivers who rent or own units in apartment towers and people who live in terrace houses in capital cities with only street parking available.

“Long before the buildings reach [their] end of life, we can expect to have achieved a transition to near-100 per cent EVs, so we need to plan accordingly.

“An apartment building that gets erected today, without readiness for EV charging to be deployed in future, guarantees expensive challenges for its residents in future.”

There are now more than 3000 public chargers installed across Australia – courtesy of increased taxpayer and private investment – at more than 1650 locations, representing a ratio of 7.2 electric vehicles for every installed public charger.

Several local councils are also trialling pop-charging stations connected to EV owners’ residential properties that can be installed on nature strips to encourage uptake in inner-city suburbs where terrace houses do not have driveways.

Publicly funded policy think-tank, the Grattan Institute, has argued governments must plan now to ensure convenient, local vehicle charging is available by 2030 for all residents of homes without off-street parking.

A report in August, written by Tony Wood, Alison Reeve, and James Ha called for the National Construction Code to be amended to require new houses and apartments to include electrical cabling to car spaces and garages that could support later installation of vehicle charging points.

“This requirement could also apply to significant alterations and additions to houses and apartments. Doing the electrical work for a charging point is much cheaper at the time the building is built or added to, rather than later,” it said.

If implemented it would ensure that by 2035, about a quarter of homes would have charging access, and at lower cost than if retro-fitting had been required.

The Business Council of Australia, the lobby group representing businesses such as the major banks, Wesfarmers, BHP, Rio Tinto, Qantas and McDonald’s highlighted the need for increased investment in electric vehicle infrastructure in a landmark report last week.

Arguing that Australia must lift its 2030 emissions reduction target to between 46 and 50 per cent below 2005 levels, its report said An increased penetration of light electric vehicles in 2030, to 22%,

It called on all states and territories to adopt NSW’s ultra-fast charging infrastructure approach as part of their electric vehicle strategies, which includes co-investment in so-called EV super-highways – long stretches of major roads connecting major cities with a series of fast-charging stations and offstreet parking chargers.