Malin Åkerman stars alongside Charlie Heaton in the new episode of ‘Soulmates.’ HL spoke EXCLUSIVELY with Malin about her belief in soulmates, working with the ‘Stranger Things’ star, and more.

The newest episode of AMC’s anthology series Soulmates airs Nov. 2 and stars Charlie Heaton and Malin Åkerman. The episode follows Kurt, who is devastated when he finds out that his soulmate is dead. However, he crosses paths with a woman named Martha, and they seek faith and opportunity in the arms of The Church of Righteous Transition.

HollywoodLife talked EXCLUSIVELY with Malin ahead of the new episode. She revealed why she thinks soulmates don’t always have to be romantic and discussed whether or not she’d take the soulmate test that’s featured in the show. Malin also teased Martha and Kurt’s “instantaneous” connection but “tumultuous” journey together. 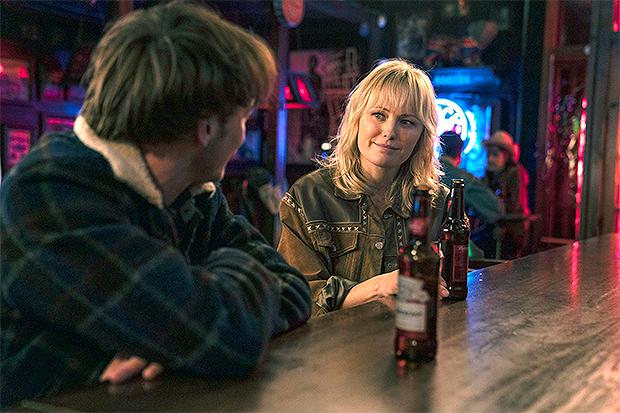 This show explores being able to find your soulmate. Would you take the test in real life if you could?
Malin Åkerman: I don’t know is the true, honest answer. I don’t think so, especially where I’m at in my life right. What if I took the test and my husband isn’t my soulmate? That would get weird. I’m always hesitant to go to a psychic, for instance, because I just don’t want to mess with what’s already here. I feel like self-manifestation is always the best way. I feel like that’s really messing with someone’s psyche. And what if it’s not true? What if there’s a glitch in the matrix? I don’t know. I’m skeptical about it. But then again, watch, the test comes out, and then the curiosity kind of kills the cat off, and I am first one in line.

Do you think you can have more than one soulmate in this life?
Malin Åkerman: I do. I think that and I also think that soulmates don’t necessarily have to be romantic. I think that soulmate for me, if I’m using my own description, would be that it’s just somebody that you feel like you’ve known your whole life from the day that you meet them. There’s some sort of special, deep connection, whether it’s your souls, a past life maybe, whatever it may be, but I think I can count on my hand a few people who are soulmates to me. My husband being one of them. I just don’t know that you’re meant for just one person. There might be a few along the line.

Tell me a little bit about Martha and her story. What drew you to this particular character?
Malin Åkerman: I think it’s a place where most of us have probably been or some of us. I don’t want to make a generalization, but I know I have for sure found myself in a moment where I’ve just been going from one bad relationship to the next just going, I’m not cut out for it. This isn’t for me. I’m not finding the right person. This is exactly where Martha finds herself. She’s just kind of given up because she just keeps making the wrong decisions. I think when you haven’t broken a certain pattern, it’s just not going to get any better. So she turns to the test, which may not be the best answer for her either.

She does cross paths with Kurt, played by Charlie Heaton. What is their dynamic like? What do they find in each other?
Malin Åkerman: Well, at first when they meet each other, it’s quite instantaneous. I mean, they like each other. But obviously, their relationship, which I say loosely, has a tumultuous trajectory. It’s that feeling of you think you’re looking for one thing, but the thing that you’re looking for might be right in front of you. That’s sort of the two of them. 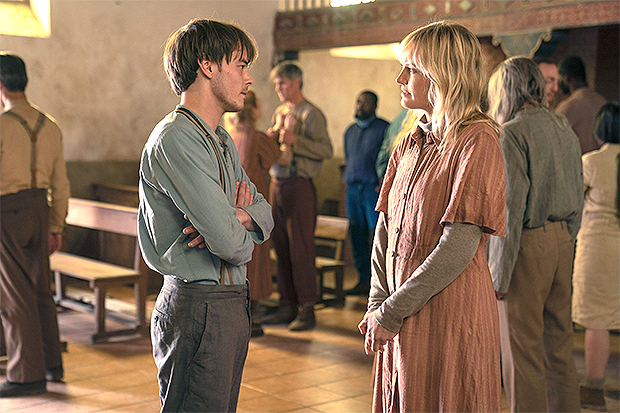 Martha does end up going to this Church of Righteous Tradition. What is she looking for there?
Malin Åkerman: She’s learned something sad about her soulmate, so she’s trying to find solace in this church. They’re offering comfort for those who have been through the same experience after taking the soulmate test. Maybe the outcome wasn’t the way they thought it was going to be, so this church has said that they’re there to support but there’s a big surprise.

You’re working alongside Charlie Heaton from Stranger Things. What was it like collaborating with him on this?
Malin Åkerman: It was great. I love Charlie. He’s such a sweetheart. We had such a lovely time. He’s a very talented actor. He’s very invested. I love an actor who just comes in and wants to do the work. He’s like an eager puppy. There’s no pretense. There’s nothing superficial about that boy. He’s all in, and I really love that. That’s why he’s such a good actor. He doesn’t care how he looks. He’s just like, let’s do it. This is what the character would do. This is what we’re doing. So I really enjoy actors like that, who are all in. We had a great time together.

You have a number of other projects, including the movie Friendsgiving. What was it like working with such an incredible cast?
Malin Åkerman: I think the timing couldn’t have been better for this film to come out. It’s been in the works to come out for the past two years. It’s been finished, and we’ve been trying to kind of figure out the best timing, and now here we are. But we just are so lucky to have this cast — all these amazing comedians and Nicol Paone, who wrote and directed it, is a good friend of mine. She got the idea when both she and I were going through breakups, and we were dealing with our breakups very differently. The heart of this is these two friends coming together to spend Friendsgiving together, which we have done in the past. Here in LA, a lot of people move here for work, and you’re not necessarily here with your extended families, so it’s a great opportunity to do Friendsgivings. There are so many great layers to this film and so many fun moments and funny moments.

You’ve had so many amazing roles over the years. What are you looking for in a role now?
Malin Åkerman: There are two things that will attract me to a role. It could be a genre that I’ve never done, or it could be the writing is just excellent. Even if it’s a small part, I just want to be part of the project as a whole. It just depends on what draws me in, but most of the time, there has to be something that I can do with the role so that at least it’s interesting for me creatively to play.