An international success for the National, this production of War Horse conquered the West End and Broadway and last toured to Melbourne in 2012. It returns with winning form intact – a slick, spectacular and ultimately moving show that rides high on world-class puppetry. 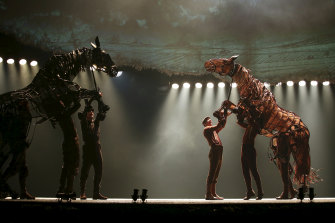 The story of a horse and his boy who survive the horror and inhumanity of World War I.Credit:Andrew Tauber

The story of a horse and his boy who survive the horror and inhumanity of World War I, War Horse is adapted from a novel for older children. And if it doesn't skimp on violent and distressing subject matter – the "war to end all wars" wasn't light on cruelty – its strong anti-war message, brilliant design, and the way it captures the magic of the bond between horses and humans make for a striking introduction to theatre.

Farm boy Albert Narracott (Scott Miller) cares for and trains a foal – a cross between draught horse and thoroughbred – after his father pays too much for it at auction. He lets the horse choose its own name – Joey – but after his father makes a rash wager Albert must teach Joey to plough within a week or they'll be parted.

They win the bet but war looms, the army is paying a premium for good horses and Albert's dad sells Joey. Too young to enlist the distraught boy runs away, determined to join the war effort and find Joey.

As Albert grimly endures the slaughter of trench warfare on the Western Front, Joey survives machine-guns and barbed wire and, along with a companion horse Topthorn, falls behind enemy lines and into the care of an animal-loving German cavalry officer.

The poignancy of an improbable reunion is amplified by the toll of war, and the final image sees Albert return to the farm shattered, stricken and pale with horror at what he has seen.

You may end up feeling more for the horses than the humans. In part that's down to the inspired puppet creation from South Africa's Handspring Puppet Company. Teams of three operate the imposing life-sized horse puppets and they animate these majestic steeds with astonishing attention to the detail of equine movement and behaviour.

You'll wonder how so artificial a form as puppetry can be so lifelike, can so effortlessly induce our empathy. And you won't be alone if you think the horses have more character and complexity (and are generally nicer) than the people.

As scripted, for instance, Albert is an impossibly wide-eyed, one-noted, say-everything-twice kind of boy – and that gets irritating fast. (He even tries, in one problematic moment, to talk to a foreign girl the same way he talks to his horse, which is about as unwoke as it gets.)

Yet if the oversimplified writing doesn't allow the actors much scope for nuance, the show's atmospheric design does serious emotional labour: liberal use of sentimental folk songs led by Ben Murray in fine voice, sharp tableaux vivants, with alarming strobe lighting and cinematic sound and dark expressionistic animations for battle scenes.

It's grand and dashing and desolating – a ground-breaking achievement of theatrical craft that stands ready to conquer a fresh audience.