‘Yes, my daughter looks different. And that has been a gift’: Discovering her longed-for baby had dwarfism was heartbreaking for Van der Valk star MAIMIE McCOY. But, seven years on, her ‘wonderful’ little girl Agnes has enriched Maimie’s life in ways she could never have imagined

Through most of her pregnancy, actress Maimie McCoy had thrived. It was her first baby, she’d felt strong and fit, her scans had been normal, but at 30 weeks, her petite bump had a sudden growth spurt. That was the sign that raised alarm.

‘My midwife thought it was diabetes, I thought it was the Ben & Jerry’s I’d been stuffing in,’ says Maimie, 43. In fact, it was a build-up of fluid. Scans, tests and measurements followed. ‘We were quickly told, “We think your baby has stopped growing,” she says. ‘You don’t know what to think at that point. Then they mentioned that big word that didn’t mean anything and took us so long to grapple with.’

That word was achondroplasia, the most common cause of dwarfism, which affects about one in 25,000 people in the UK. It occurs when cartilage doesn’t grow properly in the bones of arms and legs, leading to shorter limbs – Olympic swimmer Ellie Simmonds and Game of Thrones actor Peter Dinklage both have the condition. While 20 per cent of people affected by it inherit it from a parent, the remaining 80 per cent are born to parents of average size. For them, it’s a spontaneous genetic mutation. This is what happened to Agnes. 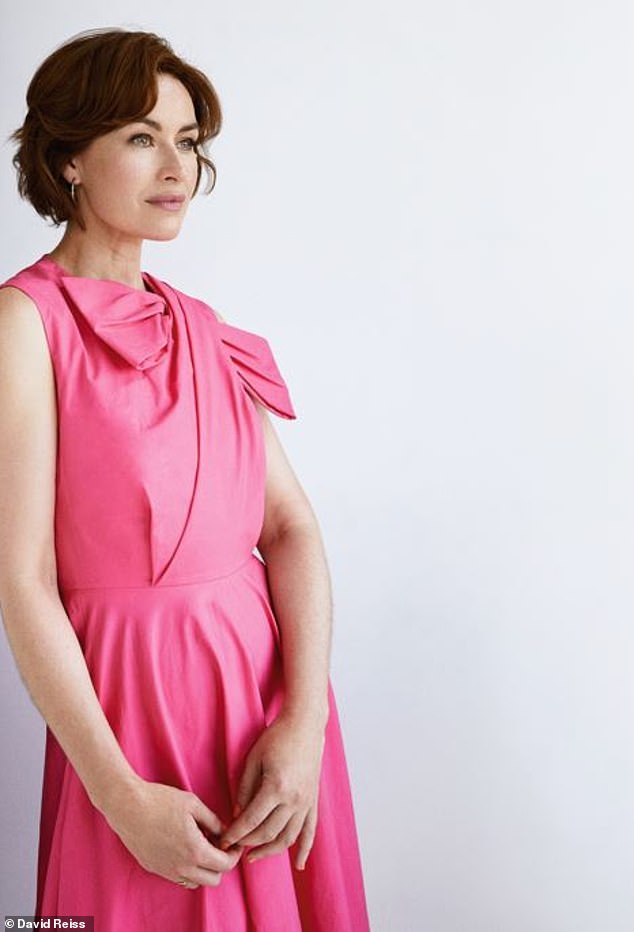 Maimie – a familiar face from TV dramas including Grantchester, Van der Valk and All Creatures Great and Small – has come a long way since those dark days of the diagnosis

Maimie – a familiar face from TV dramas including Grantchester, Van der Valk and All Creatures Great and Small – has come a long way since those dark days of the diagnosis. Back then, she didn’t google, research or reach out to other parents in a similar place. ‘You’re in massive shock, a kind of freefall,’ she says. ‘As a parent, you realise you’re embarking on a journey that is full of grief. You’re grieving the child you thought you were going to have. I kept thinking, ‘She won’t be able to do this or that. I’m a dancer but she won’t be able to dance.’ Your brain goes into a negative place – as if you’ve been robbed of something.’

At the time, Maimie was married to Agnes’s father, though they have since divorced. ‘I can’t speak for him, but it was a different experience for both of us,’ she says. ‘Parenthood is different anyway for men and women – I was the one carrying her. Along with all the grief and the shock, I also felt this immense sense of power. I had to hold it together for her.’

The birth wasn’t what Maimie had wanted – a natural delivery with ‘all the pain’ – as the extra fluid and her baby’s proportions made an elective caesarean the safest option.

Fortunately, says Maimie, Agnes soon showed she was healthy and robust – she still has a rock-solid constitution. Yet Mamie looks back on her first couple of years of motherhood as a difficult time. ‘There was a delayed trauma, a slight disconnect. It felt unfair – that’s not usually my thinking – and I had moments of asking, ‘Why is this happening to us?’

‘I went to mother-and-baby groups, although sometimes I found it hard, very emotional and lonely. I had to put my blinkers on and stay away from ‘milestones’. I didn’t know when Agnes would crawl, if and when she’d sit. I took her to France on the Eurostar when she was 11 months old and she needed a car seat because she couldn’t sit up. Most babies can by that age.’

Fast-forward to now, with Agnes aged seven, and those milestones are a long way behind them. ‘All those thoughts I’d had about things she’d never do – they are now the stuff Agnes does,’ says Maimie with pride. ‘Her body is her greatest instrument. She’s very active and sporty, she skips everywhere. I saw her tap-dancing in her class last night and as her centre of gravity is low her balance is extraordinary. She’s a natural dancer.’

She’s also a big personality. ‘Agnes is very social, she’s sassy and curious. She gets looked at a lot so she now puts on a show. I think she feels, ‘If you’re going to look at me, I might as well give you something.’ It’s kind of wonderful, although the shy girl in me finds that difficult.’

Maimie lives in North London with Agnes, sharing her care with her ex-husband. Right now, she says, the main issues raised by achondroplasia are practical ones. Agnes is the height of a two-and-a-half-year-old, so needs steps to reach things, or the right chair at school, a classroom on the ground floor so she doesn’t need to climb stairs. However, Maimie knows other challenges lie ahead.

‘When Agnes was very young, we used simple language about her bones being special and growing differently to other people’s,’ says Maimie. ‘We’ve had all sorts of conversations since. Sometimes it’s hard and she’ll say: ‘I don’t want to be like this’ and ‘When will I be tall like my friends?’ When the schools went back after lockdown, lots of kids had shot up, and that was a shock for her.’

Last summer the pair went to Amsterdam for Maimie to work on the second series of ITV drama Van der Valk – a remake of the 70s crime hit. One night after filming, Agnes got very upset. She told her mum, ‘My best friend won’t want to marry me when I’m older because I won’t be tall enough. He won’t love me because of how I am.’

‘When you hear that, you feel like you’ve been hit by a bus,’ says Maimie, ‘but within a split second you have to claw yourself back. So I told her that if somebody doesn’t like you or love you for who you are then they are not worth having, and they don’t deserve you.’ 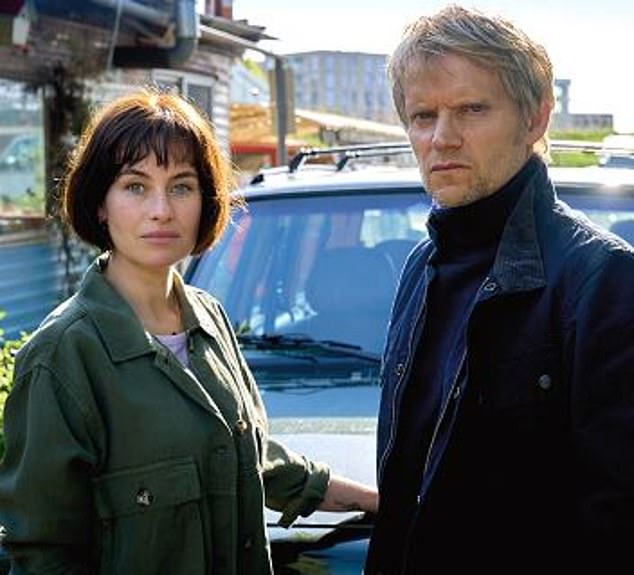 Maimie with Marc Warren in Van Der Valk. Being mother to Agnes has taught Maimie so much, she says

That same summer, when Maimie got back from filming, Agnes announced – out of the blue – that she wanted to meet someone like her. Thankfully Maimie already had someone in mind. ‘Some people I was filming with told me about a really accomplished actress called Tessa Jonge Poerink, who is a big deal in the Netherlands. They arranged for us to spend a day hanging out. Agnes was looking at Tessa’s limbs, taking it all in, asking questions. We were in the park, so she was asking, ‘Can you climb that?’, ‘Can you do this?’ She was curious about Tessa’s bike, she wanted to know whether she could drive, too. Then she’d just ask anything. ‘Do you know this song?’, ‘Have you got a boyfriend?’ Kids ask questions, they share and talk very well. We lose it as adults as we’re scared of saying the wrong thing.’

Being mother to Agnes has taught Maimie so much, she says. ‘One of the greatest gifts I’ve got from Agnes is that she pushes me to be more daring, more bold. I’m incredibly self-conscious, but I’ve got an extrovert child who is stared at by everyone. It forces me to be at the forefront.

‘It’s also relaxed how I feel about myself, my face and my body,’ she continues. ‘The ageing thing is looming, older actors drop off the screens. When you have a daughter who looks different you don’t want to fixate on your appearance or Botox the hell out of your face. You have to promote the importance of being yourself. We can take pride in our looks and our style, but it’s not the best thing about us. That has been a wonderful gift.’

Agnes has grown into a delightful companion. ‘Time with her is enjoyable. We dance a lot together. We cook, too. She’s also very caring and there’s a wisdom to her,’ says Maimie. ‘I trapped my thumb in the car door a couple of weeks ago. I nearly passed out and went into shock and when we got home, Agnes said, ‘Mum, you’ve looked after me my whole life. I’m going to look after you now. I know what to do. Mum, I’ve got this!’

It’s a picture that couldn’t be more different to the one Maimie saw when she was heavily pregnant – but she feels no guilt about her first reaction and urges other parents at a similar stage to feel the same.

‘You have to allow yourself to think bad thoughts, and not be ashamed about all the things that are impossible to say but that you feel. It’s part of the journey. But if I look at her now,’ she continues, ‘if I knew this was coming… Agnes is an absolute joy.’