Lord Mayor Sally Capp says the pandemic has been good for Melbourne and that the city has emerged bruised but bolder and braver than before.

Capp will give a TEDx talk on Friday that will describe the ways the city has benefited from COVID-19, such as outdoor dining. 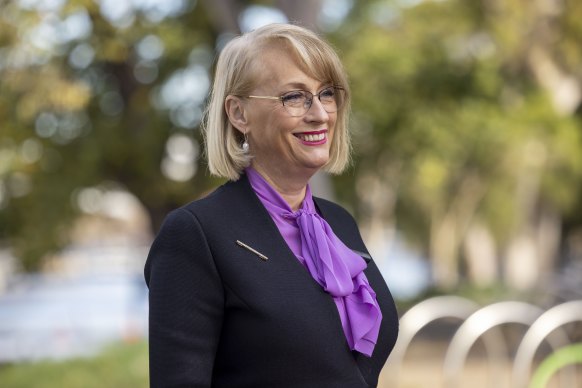 Lord Mayor Sally Capp is giving a TEDx talk on how Melbourne has benefitted from the pandemic.Credit:Wayne Taylor

Melbourne spent 262 days in lockdown and 5,938 people have died from the virus in Victoria since the pandemic began, according to the health department.

State debt is set to reach nearly $155 billion within four years as the government tries to power Victoria out of its COVID-19-induced recession.

Across Australia, more than 870,000 people had lost their jobs by May 2020 as lockdowns began.

“There aren’t many who will stand in front of a crowd like this and say COVID has been good for anything or anyone,” Capp will say in her talk. “But I’m here to do just that.”

“But that all came crashing down with the ‘bring bring’ of a telephone,” she will say. “It was one, then two, then three major city events – including the Melbourne International Comedy Festival – calling to tell me they were cancelling because of this virus.”

Capp says she had no idea of the enormity of what was coming.

Her talk is part of TEDxMelbourne’s Kintsugi: From Broken to Beautiful series. Kintsugi is the Japanese art of repairing broken pottery by mending the areas of breakage with lacquer or powdered gold, silver or platinum.

Capp will say she is not “donning rose-tinted glasses” in recalling the pandemic but that, in the midst of chaos, there is opportunity.

“Melbourne has emerged bruised, but bolder and braver because of it all,” she will say.

Capp will point to the way government agencies, community housing associations and hotel operators worked together to house 2000 people in central hotels.

“It changed lives. I recently received an email from a gentleman who lived in a local hotel over lockdowns. Despite experiencing homelessness for some years, this hotel stay was the circuit breaker he needed to turn his life around. He now has a job and secure housing.”

Capp will also highlight the City of Melbourne’s business concierge service that was introduced during the pandemic and outdoor dining parklets.

“The parklets are now a permanent positive feature of Melbourne,” she will say. “You could say the parklets are golden fissures making Melbourne’s famed dining scene better than it ever was.”

Capp will say that the roar of a record Grand Final crowd, queues for coffee and sold-out tickets for the Rone exhibition and musical Hamilton are all signs Melbourne’s wounds are healing.

“There is a lingering acknowledgment, thanks to COVID, that tomorrow is never guaranteed,” she will say. “And we won’t take any of the ‘only in the city’ experiences for granted again.”

Capp will say projects such as her plans for a Greenline along the Yarra and Power Melbourne, an independent network of mid-scale batteries, are big ideas that have been accelerated by the pandemic.

While gross local product plummeted during lockdowns, Capp will say it has bounced back to pre-pandemic levels and is expected to hit $150 billion by 2031.

“Now that’s what I call lockdown to boomtown,” she will say. “It’s thanks to the debilitating impacts of COVID, the 262 days as a broken city and community, that we have achieved the seemingly impossible, pirouetted, taken risks, dreamed big and accelerated progress.”