Currently in production in far north Queensland and due for completion next March, the one-hour program will feature ultra-high-definition footage of the tiny plants and animals that live below the surface on the Great Barrier Reef. 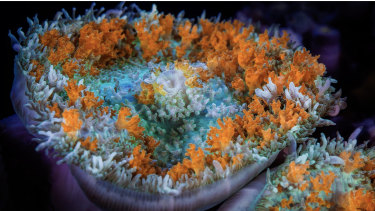 One of the tiny underwater creatures on the Great Barrier Reef captured by BioQuest, which is working on a documentary for Netflix.  Credit:BioQuest Studios

"It's a story that entirely lives in the miniature world of the reef, the stuff you really don't see unless you're looking very closely at it, and it's the stuff that keeps the reef alive," says co-producer Nick Robinson, whose Wild Pacific Media also made the IMAX film Australia's Wild Top End and the three-part ABC documentary Australia's Ocean Currents.

His company has collaborated with Port Douglas-based BioQuest, which specialises in high-definition underwater photography. Much of its work is done in collaboration with marine research institutes, though they have also contributed to nature documentaries including the BBC's Blue Planet.

Using underwater camera rigs and drones capable of tracking and dollying and otherwise following the action of animals that range in size from small to microscopic.

"The largest creatures in the show are about the size of your thumb," says Robinson. "The smallest you can't see with the naked eye."

The film is being shot on location, up to 160 kilometres offshore, and in "the studio" – using large aquatic tanks. Being so small, some of the creatures move imperceptibly slowly to the naked eye, but their almost fantastical adventures can be captured via time-lapse photography.

"The longest time lapse we have at the moment will run for eight months," explains co-producer Pete West, of BioQuest. "We have six cameras, capturing one image a day. You need 24 images for a second, so if we're incredibly lucky we'll end up with a couple of minutes at the end of eight months."

Robinson is convinced it'll be worth the wait, bringing to the screen images we've never seen before of a world of critters so small it is all but invisible to the naked eye.

"Once you live in this world for a little while they're just like big creatures – they seem to have the same purpose, the same thought processes, the same little battles and wars. It's like the Serengeti only it's tiny, and it's exceptionally beautiful.

"I've made quite a few films on the reef," he adds, "but this is like a whole new planet to me."