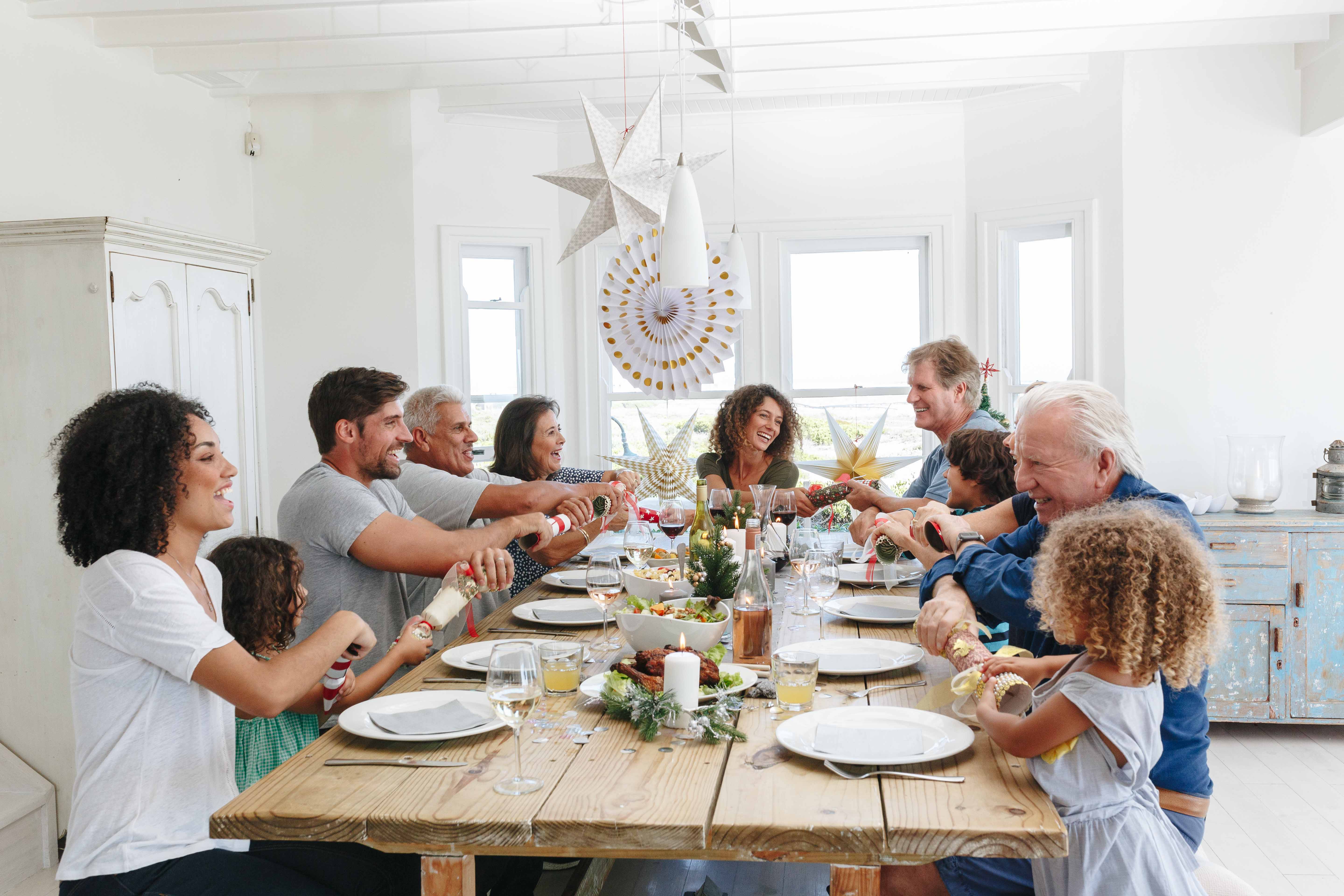 For the first time in his life, Teddy, a trans university student in his 20s, isn’t spending Christmas with his family.

And he has good reason to. ‘My mum is quite transphobic and I’m still not fully out,’ Teddy tells Metro.co.uk, ‘she’s the complete opposite of me politically.

‘She’s the main offender in drama, trauma and all other terrible things.’

The Christmas dinner table always ends the same. Side-orders of ‘off the cuff’ remarks about trans people which don’t pair well with his Christmas puddings.

Even opening presents can be tricky. ‘They’re filled with deadname stuff,’ Teddy says, each a reminder of how some of his family don’t see him as the person he truly is.

This year, Teddy decided he had enough of the bitter transphobic rows and general awkwardness – he’s visiting his girlfriend’s folks for the holidays this year.

‘It’s doing something completely different,’ he says, ‘not having to deal with a biological family of terribleness.’

Psychologists, life coaches and others like Teddy know exactly how he is feeling – the relief of not having to spend Christmas with anti-LGBTQ+ family members.

Only 47% of LGBTQ+ people feel they can be open about their sexual orientation or gender identity to their family, according to Stonewall.

While others might be shunned and rejected by their families for being who they are. Three in 10 LGBTQ+ people have experienced abuse from a family member, according to LGBTQ+ anti-abuse charity Galop.

This spikes up to four in 10 for trans and non-binary people. In all cases, 60% said their identity was the flash point.

For LGBTQ+ people preparing for a Christmas with people who don’t support who they are or don’t get along with, here are some ways to navigate it all.

Top of the list is ‘self-care’, says Gina Battye a psychological safety and LGBTQ+ consultant.

‘Look after yourself before, during and after your trip. Exercise, reading, writing, meditation, being social, massage,’ she says.

Decide on boundaries beforehand and stick to them and don’t feel obligated to talk about things you don’t want to – especially if that means having to tolerate anti-LGBTQ+ bigotry, says Dr Wilson.

‘If you’re anticipating some tension, you could organise a safe word with a sympathetic family member,’ she adds. ‘They’ll know to step in and change the topic if it’s becoming uncomfortable for you.’

And if the same old probing questions come up every festive period, write down template replies in advance to quickly get family members off your back.

Dr Hannah Wilson, head of clinical governance at digital mental health provider Kooth, says when it comes to family chitchat over Christmas, it can feel like ‘it’s all or nothing’.

‘There’s a generational divide,’ she says, ‘faced with a relative loaded with “facts” that the mainstream media don’t want you to know, it’s natural that you might choose to shy away from discussions.’

Caleb, a 19-year-old trans person living in Newcastle, says his dad’s parents often misgender and deadname him, somwthign he chalks down to their age.

‘Everyone corrects them each time, but over four years later and they still get it wrong,’ he says.

‘They hold what are considered “old-fashioned” views and say that they support and accept me, but I don’t believe they support the wider community.

‘Try to remember it’s not your job to change anyone’s mind,’ adds Dr Wilson. ‘Even if you feel passionate about a topic, not everyone is going to agree with you.

‘Accept that people approach things from different perspectives – whether it’s generational, because of their upbringing, or something else.’

If things do get heated, Caroline Strawson, a trauma-informed psychology coach, says ‘language is important’.

‘It’s helpful not to use “you” when talking about feelings but say “I” instead,’ she says.

‘Rather than “you make me feel” a certain way, say “I feel” this way. This can make the other person less directly responsible for your emotions.’

3. Avoid too much alcohol

Yes, really. Put down that third glass (or bottle) of wine over dinner, says psychologic and relationship advisor Barbara Santini.

‘Excessive drinking is dangerous because it can make you aggressive,’ she says.

‘Limiting your intake or avoiding it completely would help give peace
through your stay better with people you are not in terms with this
festive season.’

4. But know when to eat and drink

Eating and drinking do have a pretty good perk: bringing people back to the present, says Neil Seligman, a mental health expert and founder of The Conscious Professional.

‘When feeling irritation or disturbance with another person, first ground yourself by coming back to the physical sensations of eating and drinking,’ he says.

‘Scan for texture, taste, and temperature. As you slow things down, inhale and feel where in the body you sense the disquiet. Take a few gentle breaths here and sense the pause.’

5. Know when it’s time to leave

When in doubt, it’s fine to remove yourself from the situation entirely by having a few escape plans in your pocket, Battye adds.

‘Offer to make a hot drink for everyone. Go to the bathroom. Stick your head out of the door and breathe in some fresh air,’ he says.

‘Offer to do an emergency run for more crisps or napkins. You can never have too many napkins, right?’

6. Don’t feel you have to ‘please’ your family

Tom, a gay 26-year-old, says he’s dreading the two weeks he spends with his family over the holidays for this very reason.

‘It definitely feels like an impossible choice,’ he says, ‘stand up for the things I believe in or keeping the peace.

‘Harmony and for their kids to all be together is all my parents want. And I often feel like the thief of that if I challenge my brother on his latest homophobic remark.’

‘But there are some fundamental differences in our politics and spending this much time together can be triggering.’

Santini says many LGBTQ+ people experience this – and something they can do is simply not try to ‘please’ their family.

‘If your uncle is irritated by your gender identity; maybe you are gay,
I know it would be hard to stay around them,’ says Santini.

‘But do not bother yourself much about pleasing him or hoping that they will understand because it only increases your anxiety.’

7. Use Christmas as a time to heal

Strawson says how we don’t choose our family can make rifts especially painful for people.

Christmas doesn’t have to be a minefield, though, and can actually be a perfect time to heal old wounds rather than rip them open if you feel safe and comfortable enough.

‘Trauma isn’t the family member or conflict, it’s the spotlight in your emotional wounds that is the trauma,’ she says.

‘Timing is key around holiday time because peace is at the forefront of everyone’s mind but equally so is resolution and holiday time can be a good time to resolve ongoing family issues if people are open to that.’

If a family member’s actions bring you close to tears or boil your blood, ask yourself why you react in this way, Strawson says.

‘These are all stress and trauma responses to the person of situation,’ she says.

‘If you decide to speak to them, do it for you with no expectation about what your family member says or does because otherwise, you will end up being disappointed,’ Strawson says, adding that it’s a good idea to consider whether the person will listen to you in the first place.

‘Reframe and look at your own inner peace at this time and maybe saying nothing is still saying something. Something to yourself, that you deserve peace.’

8. Don’t be afraid to rewrite what ‘family’ means altogether

Not everyone has a good relationship with their family, and rifts can run deeper than a tiff over Monopoly.

So Teddy has some advice: Make a ‘chosen family’, a support network not of people you’re ‘related’ to but those do play a meaningful role in your life.

‘Make your own family – it doesn’t have to be annoying parents or in-laws you only see once a year,’ he says.

‘It can be your flatmates, your colleafyesm your friends – anyone.’

How do you tell your biological family that you’re not seeing them for the holidays? ‘Try prefacing it with something like, “I’m trying something new for Christmas”,’ Teddy suggests.

‘Don’t get confrontainabl about that – it’s not worth getting into an argument about it.

‘That generally is a really important part of dealing with family – knowing when to bother.

‘Like with trans stuff, I don’t really argue with that as I simply can’t be bothered