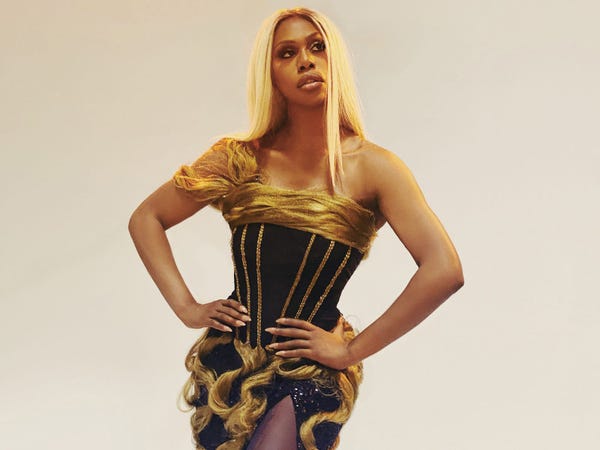 Laverne Cox stars in the horror-comedy film "Bad Hair" — and she recently wore a fitting dress as a nod to the role.

On Tuesday, stylist Alexander Julian shared a photo of the actress wearing a black gown with a single strap and a thigh-high slit. He said in his caption that he took the photo during her Paper Magazine cover shoot, and added that he embellished the dress with curled and braided strands of synthetic blonde hair.

Speaking to Insider, Julian shared what inspired him to create such a unique piece. He also walked us through the process of creating the dress, and recalled Cox's reaction when she saw it for the first time.

Julian told Insider that he found out about Cox's Paper Magazine shoot "really last minute," so he had to work quickly to get outfits from designers. Once his orders arrived, however, he noticed that there was something missing: a "wow factor."

"I was out shopping for fabric in Brooklyn for another cover shoot that I was working on, and I was like, 'There's probably a beauty supply store somewhere. I should make Laverne a hair dress,'" he said. "I just went in and was like, 'Can I get a bunch of the cheapest hair you have?'"

Julian added that he "had no plan whatsoever," and was cautious not to spend his entire budget because he didn't know if his vision would work.

"I asked the employee a billion questions and walked out with seven or eight bags of 84-inch Kanekalon hair," the stylist said.

To bring his idea to life, Julian recycled a corset and a long skirt to create a new bodice. Once he had the structure ready — with a new train, thigh-high slit, and cinched waist — he went on to add details using Kanekalon hair. The process was more difficult than he imagined it would be.

As Julian told Allure, the synthetic hair — made from a modacrylic fiber — can be "hard to use" because it "gets tangled immediately." But by using a sketch he made for guidance, Julian was able to style the hair in braids and curls while attaching it to the dress. The process even brought back some fond memories for the stylist.

"I'm Nigerian, so I remembered sitting and watching my mom get her hair braided by my aunts, and how much of a ritual that was for Black women," he told Insider. "I remembered how important that hair and that texture was."

Another inspiration for Julian's creation was hairstyles from earlier decades — particularly a standout look Diana Ross wore in 1969.

"There was an image in the back of my head: the picture of Diana Ross with big hair that's all curly with flowers in it," he said. "That was the type of energy I was trying to channel."

It took Julian nearly two days to create the gown with the help of his friend, who fainted in the process

After a friend of Julian's drove him to a beauty-supply store to purchase the synthetic hair, the stylist asked her to wear the gown while he worked on it.

"I had her put on the dress and stand there as I attached all the hair — even to the point where she fainted," Julian said. "Then we took a break, and she stood back up and continued. It took us like two days."

The completed look, according to Julian, cost less than $150 to make. After all, he recycled most of the dress and only purchased the hair.

According to Julian, the hair-themed dress "looks kind of crazy" when not being worn, so he "brought it onto set hidden" so that no one could question his creation. But once he showed the dress to photographer Joshua Kissi and hairstylist Ursula Stephen — who Julian describes as "a legend" — they "loved" his idea. Cox, on the other hand, was more skeptical.

"Laverne was like, 'Um, I'm not sure but I'll try it,'" Julian said. "So she tried it on for me and I was able to get that picture, so I was really happy about that."

Julian doesn't have future plans for the standout piece, but he's still proud of his creation

Because the dress is so specific to Cox's role in "Bad Hair," Julian told Insider he has "no plans for it" now that it's been worn.

"I've been wanting to create and flex creative muscles, so for every shoot, I'm trying to find something I can create or do that's out of the ordinary," he said. "So the dress was a specific moment for Laverne. It might not fit anywhere else."

Still, he's proud of creating something so unique and representative of the Black community, especially during such a difficult time in our nation's history. He specifically recalled "having to deal with people who look" like himself "dying in the streets" as a catalyst for him being "in a really dark place."

"I think a lot of us creatives — especially Black creatives — find joy and expression in what we do," he said. "So with COVID-19 and the racial unrest recently, I went through maybe the darkest times I've ever been through personally where I was kind of not able to create or work."

"So it felt really good to be on a set with Laverne, Joshua, and Ursula, who are all amazing Black creatives and icons," Julian continued. "The movie is also something special to us because it's about hair and weaves, which are part of our culture, and it's also a horror movie, which is something we've been able to explore more in the Black community as of recently."

"I feel like it was a very strong cultural moment for us, and it felt really good to be creating something for that moment," he said.