Labor is arguing the wages of Australia’s lowest-paid workers should rise in line with inflation in its highly anticipated submission to the industrial umpire.

The six-page submission was lodged with the Fair Work Commission on Friday afternoon, saying the “challenging” economic conditions, including the sobering outlook portrayed in the national accounts by Treasurer Jim Chalmers this week, contributed to its decision to call for a wage rise. 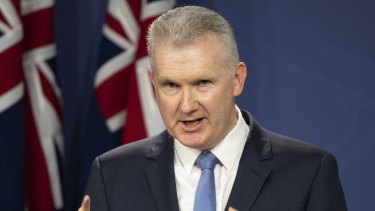 “In considering its decision on wages for this year, the government recommends that the Fair Work Commission ensures that the real wages of Australia’s low-paid workers do not go backwards,” the submission reads.

“Economic conditions are particularly challenging given inflation is at a 21-year high of 5.1 per cent and is expected to increase further in the near-term due to persistent and compounding supply shocks.”

About 180,000 Australians are on the minimum wage, currently set at $20.33 an hour, but Fair Work’s decision will also affect more than 2.6 million people on higher industry awards linked to the outcome of the wage case.

The government referenced its bid to close the gender pay gap, by saying in the submission that low-paid workers “were more likely to be female, employed on a casual basis and under 30 years of age”.

The government has sought to set itself apart from the submission lodged earlier this year by the Coalition by stipulating that a heading in the prior submission – titled The importance of low-paid work – “does not reflect the priorities of this government”.

Workplace Relations Minister Tony Burke is due to give a press conference shortly.