Twin sisters, 8, who sang Kylie hits to their dying mother in her final hours describe the ‘magic’ moment the star surprised them before her show – and performed their favourite tune

Twin sisters who went viral after singing Kylie Minogue hits to their dying mum were treated to a surprise singalong with the star at the weekend – and described the experience as ‘amazing’.

Proud father Lee, 39, from Berkshire, filmed eight-year-olds Lauren and Sophie Cripps, seranading their mother Alex, 40, in her final hours in January earlier this year and shared the clip on Twitter.

Alex, who was a massive Kylie fan, was diagnosed with a glioblastoma in February 2014 and battled the brain tumour for five years.

The video shows the girls singing to their mother: ‘When I go out, I wanna go out dancing. And when the final curtain falls, we could say we did it all. The never ending of a perfect day,’ and has been viewed nearly 60,000 times. 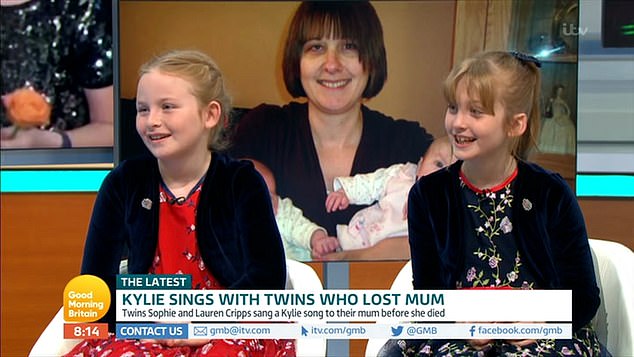 Brave Lauren and Sophie Cripps, eight, seranaded their dying mother Alex, 40, with Kylie Minogue hits in her final hours in January earlier this year and their father Lee shared the clip on Twitter 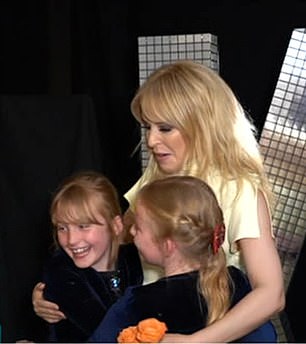 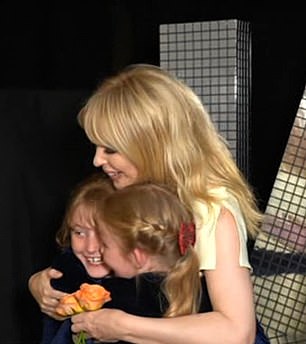 Lee tweeted: ‘Really want @KylieMinogue to see this, to see how much her music means to us as a family and I would love for our girls to meet her. Please RT in the hope it reaches her.’

He and his daughters received a touching message from Kylie, who spotted his tweet and replied: ‘Lee, thank you for sharing this tender moment of your girls singing to Alex.

‘I’m so touched, and so very sorry for your loss. Sending you and your girls lots of love.’

On Sunday night, with the help of ITV’s Good Morning Britain, Lee organised for Kylie to meet Lauren and Sophie backstage before her show at Blenheim Palace.

Stunned to be coming face-to-face with their mother’s idol, the girls ran into the singers arms before taking part in a group singalong to Dancing – the song they sang in the viral video. 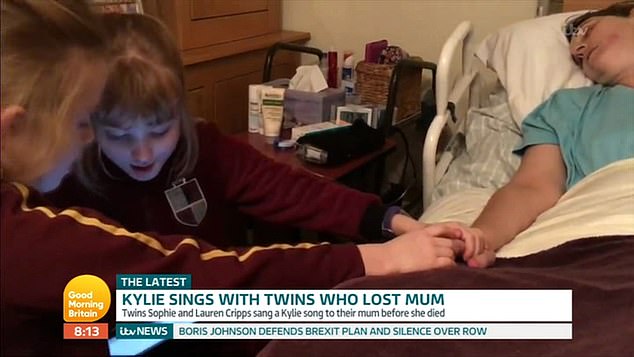 The girls’ father Lee shared the touching footage online, which was taken the day before Alex died 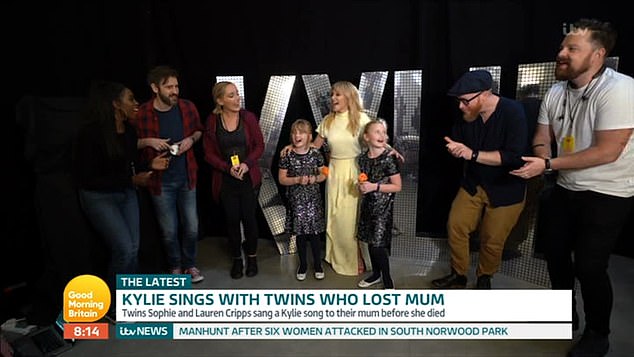 The girls were thrilled to take part in a singalong of Dancing, their favourite Kylie hit, with the star herself

Speaking on GMB today, Lauren said Kylie was ‘really pretty and kind’ and told them she was ‘really pleased’ to meet them, while Sophie described the moment as ‘magic’ and ‘amazing’.

Lee added: ‘We didn’t feel rushed, it felt very genuine and [Kylie] was a lovely person.’

Since Alex’s, death Lee has made a vow to help their adored girls ‘live life to the full’ in the way his ‘soulmate’ would want him to.

Speaking about his wife’s battle with cancer, Lee told hosts Piers Morgan and Susanna Reid: ‘We didn’t hide anything from the girls as far as the illness was concerned, they were always involved, and it was important that Alex’s choice was to be at home for those last days, so we made sure the girls were involved. 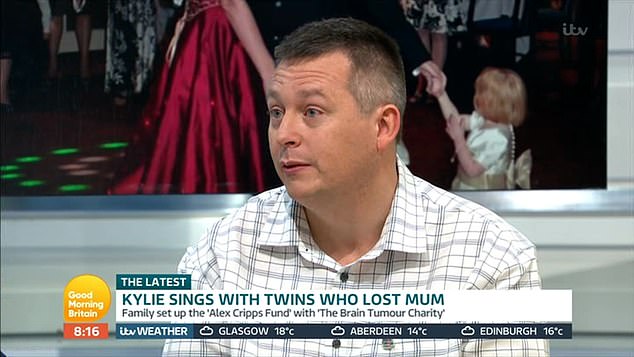 Since Alex’s, death Lee has made a vow to help their adored girls ‘live life to the full’ in the way his ‘soulmate’ would want him to 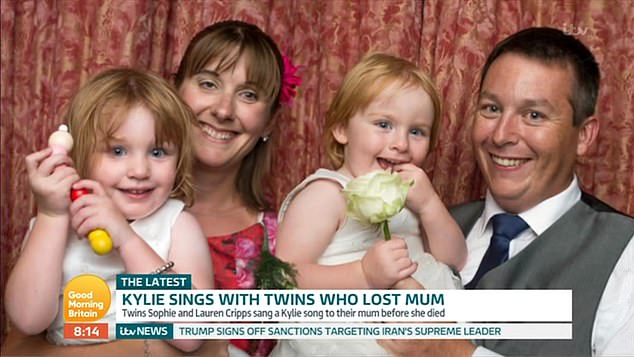 ‘Alex had the brain tumour for about five years, and each of these is like a little ray of sunshine that keeps the girls going.

‘It just gives them something to focus on and hopefully look back as a great memory.’

He said Sophie and Lauren are a ‘real mix’ of him and Alex, adding: ‘I think being blessed with twins, we’ve got the best of both… there’s a lasting legacy to [Alex] really.

Both girls read out moving tributes to Alex at her funeral with Lauren saying she was ‘lucky that God gave the very best Mummy that has ever lived’, while Lauren recalled her ‘gentle and kind’ mother and eating Maltesers together.

Lee and Alex were Kylie fans and saw her live five times. They had bought tickets to the Blenheim Palace show before Alex passed away. 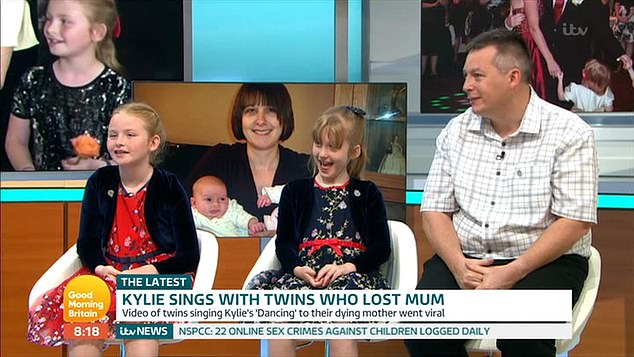 Lee said Sophie and Lauren are a ‘real mix’ of him and Alex, adding: ‘I think being blessed with twins, we’ve got the best of both’

The couple met through work at a Marks & Spencer store when Alex, then 18, was on a gap year and Lee was a 17-year-old in his last year at school.

They got married on 20 September 2003 and their happiness was sealed when Alex gave birth to their twin daughters in December 2010.

‘We both longed for children as we came from close families ourselves and wanted to give that same love and support to our own family,’ said Lee.

‘Lauren is a mini-me in looks and Sophie a mini-Alex. She was a brilliant mum and absolutely adored the girls. 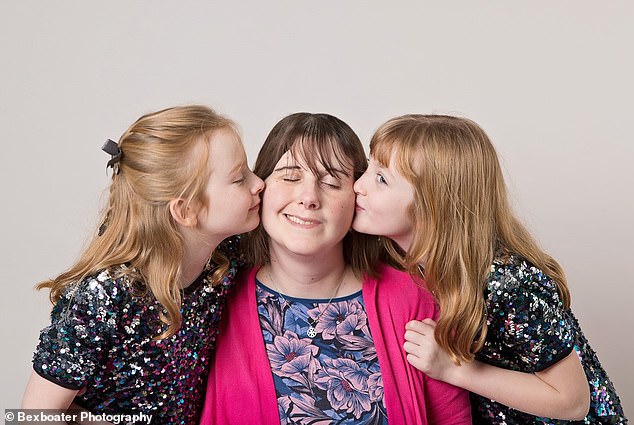 Lauren and Sophie giving their mother Alex a kiss during a photoshoot taken 12 days before her death January. Alex died of a brain tumour on January 10

‘I had several nicknames for her like AliBali and Babe, but her favourite title was Mummy.’

When the twins were three, Alex started suffering headaches and fatigue, but put it down to her hectic life.

But when the headaches became daily and then she couldn’t write properly any more, she saw a GP who referred her to a neurologist.

She was booked for an ‘urgent’ MRI scan in nine-and-half weeks’ time.

‘But we didn’t wait for that appointment as Alex’s headaches got worse and worse,’ said Lee. 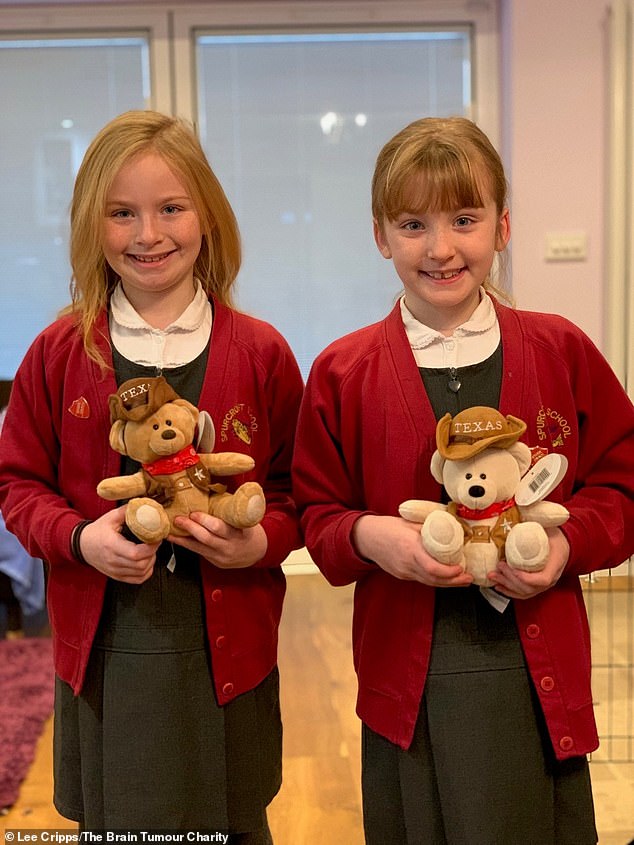 People from all over the world sent Lauren (left) and Sophie toys and mementoes since hearing of their mother’s death. Lee said he was really touched by people’s kindness

Kylie was inspired to send the twin girls a message. Above, Kylie attended the Harper’s Bazaar Women Of The Year Awards on October 30, 2018 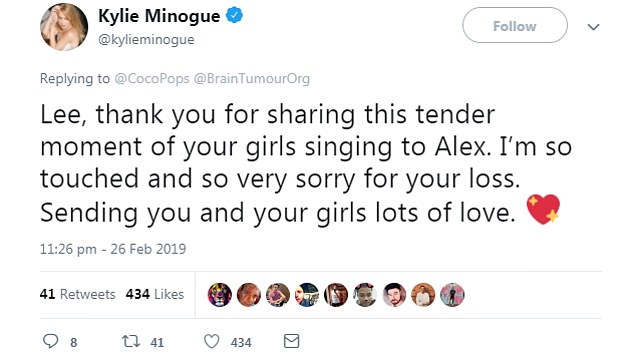 The singer saw Lee’s video and replied to him with a sweet message of encouragement, sending him her love

‘One evening, I said “enough is enough” and took her to A&E at our local hospital,’ said Lee.

Alex fell unconscious overnight and she had a CT scan, which revealed a tumour as big as a tangerine.

Alex was blue-lighted from Royal Reading Berkshire to the John Radcliffe Hospital in Oxford. She had a five-hour emergency operation to remove as much of the tumour as possible.

The mother-of-two was put in an induced coma for three days before more surgery to further debulk the tumour. 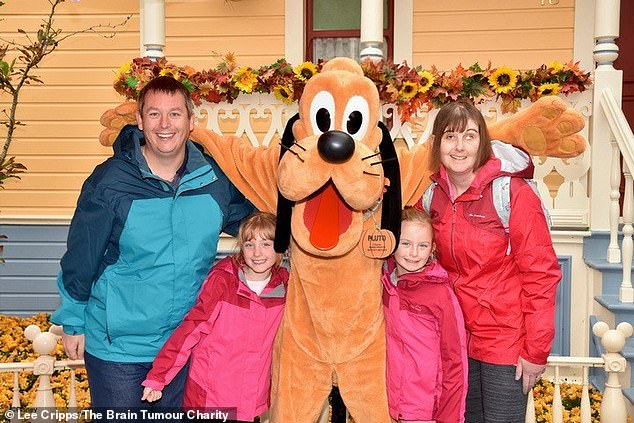 Lee, Sophie, Lauren and Alex taking a picture with Pluto during a Disney  trip. The family wanted to create memories before the mother passed away

‘Our world was turned upside down,’ said Lee.

‘From the moment Alex was diagnosed in February 2014, we decided to do everything to help raise awareness about brain tumours.’

They set up the Alex Cripps Fund with The Brain Tumour Charity which has raised over £20,500. And Alex set herself three goals to meet before she died: to see her girls start school, finish her Open University social sciences degree and celebrate her 40th birthday last August.

‘In typical Alex fashion, she achieved all three,’ said Lee. 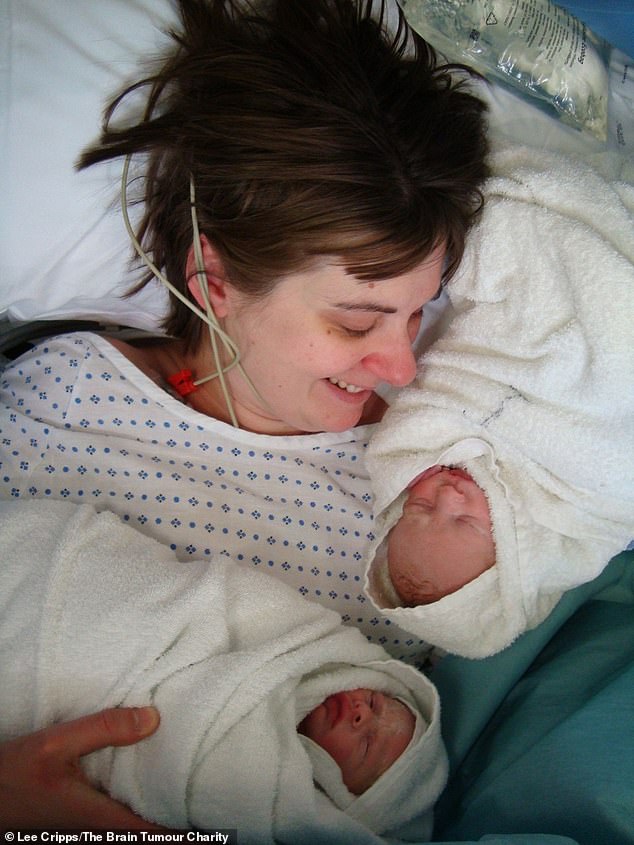 Alex shortly after the birth of her twin daughters Lauren and Sophie in December 2010. The trio was very close and both girls read heartbreaking tributes during their mother’s funeral in January 2019

‘I’ll never forget how proud she looked as we took the twins for their first day at school, she passed her degree with honours and had her 40th birthday with us.’

Alex’s quarterly scan in April 2018 showed her tumour had grown and she had to have another operation.

Biopsy results revealed her tumour had changed into a grade 4 glioblastoma – the most aggressive form of brain cancer.

‘We’d always known it was “when” not “if” Alex’s tumour came back,’ said Lee. ‘I thought of it as a dormant volcano.’

Lee and Alex were honest with the girls about Alex’s illness.

‘Their questions were: “Why Mummy? Why cancer? Why can’t doctors fix Mummy?”,’ said Lee.

‘If children ask questions, you’ve got to give answers in an age-appropriate way. 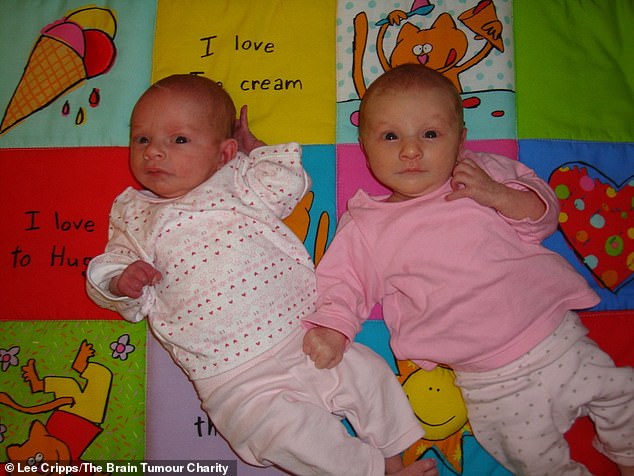 Lauren (left) and Sophie as babies. The brave girls read their own tribute to their ‘gentle’ mother during her funeral in January 2019 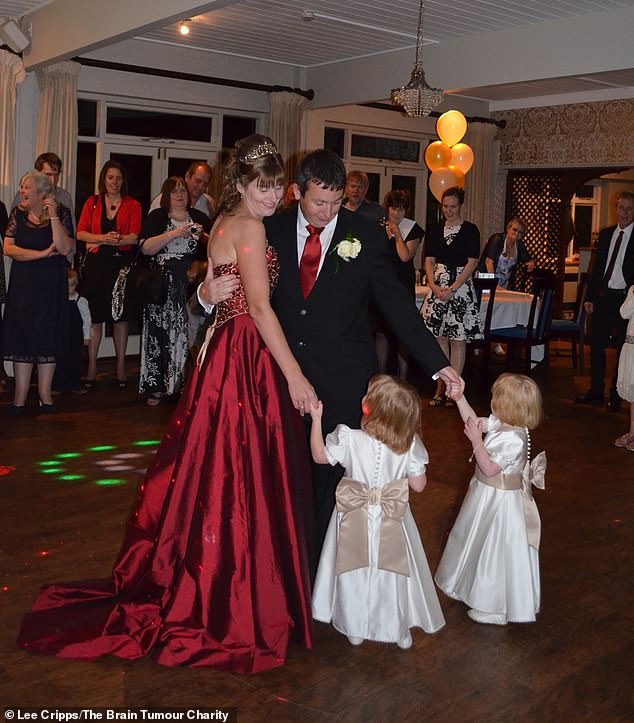 Alex and Lee dancing with Lauren and Sophie on September 20, 2013 when the couple renewed their wedding vows 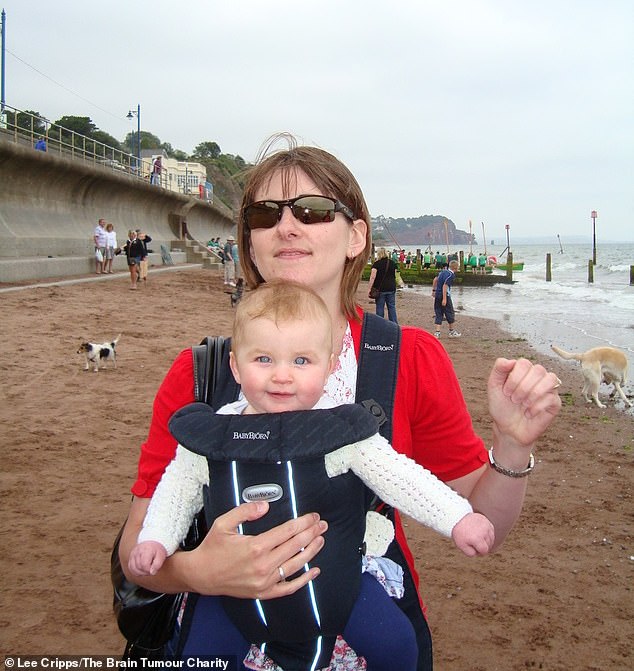 Alex with Sophie on a trip to Devon. Lee said that while he had several pet names for his wife, her favourite title was ‘Mummy’

Alex died five years after diagnosis – double the time doctors thought she had.

WHAT IS A GLIOBLASTOMA?

Glioblastomas are the most common cancerous brain tumours in adults.

They are fast growing and likely to spread.

Glioblastomas’ cause is unknown but may be related to a sufferer’s genes if mutations result in cells growing uncontrollably, forming a tumour.

Treatment is usually surgery to remove as much of the tumour as possible, followed by a combination of radio- and chemotherapy (chemoradiation).

It can be difficult to remove all of the growth as glioblastomas have tendrils that extend to other regions of the brain. These are targeted via chemoradiation.

Glioblastomas are often resistant to treatment as they are usually made up of different types of cells. Therefore, medication will kill off some cells and not others.

The average survival time is between 12 and 18 months.

Only 20 per cent of patients live longer than a year and just three per cent survive over three years.

‘Towards the end we had to tell them Mummy wasn’t going to get better and then in the last few days that Mummy was dying,’ Lee said.

‘They’d ask me what would happen if she died while they were at school and I promised them I’d come and get them as soon as I could.

‘And after Alex slipped away with me holding her hand, I went to get the girls while my mum brushed Alex’s hair and sprayed her favourite perfume.

‘Fifteen minutes after she died, they were home to cuddle her and say their goodbyes.’

Lee asked Alex what she wanted for her funeral and he carried out her wishes to the last detail, including a pink coffin with a white daisy chain.

‘I’m grateful for every second we spent together, every memory made and, most of all, for our girls,’ said Lee.

‘They keep me going and Alex’s spirit lives on in them – I see so much of her in them.

‘Both girls have her happy, caring nature and Sophie loves to write lists, just like her mum did.

‘Now her spirit and strength still inspire me every day. When asked if she had down days, Alex’s response was, ‘I don’t have time for down days.’

‘We talk about her all the time and the girls say, ‘Mummy still lives in our hearts.”