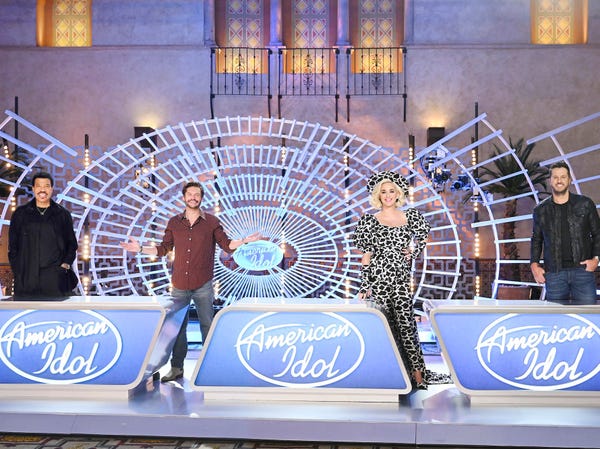 Katy Perry is back to work on "American Idol" — and her quirky outfits have returned with her.

On Thursday, the "Daisies" musician commemorated her return to set with a series of photos showing her wearing head-to-toe cow print designed by Christian Siriano. She donned a wide-brimmed hat, fingerless gloves, pointed pumps, printed pants, and a peplum top with puffy sleeves and a short train attached at the waist.

"MUTHA MILKS is back to werk @americanidol and it's 🍼udderly🍼 ridiculously MOO-ving already! 🐄," Perry wrote on Instagram. "Not pictured: my pumping breaks 🙃 (shout out to @csiriano for the incredible custom costume 💅🏻✨)."

MUTHA MILKS is back to werk @americanidol and it’s 🍼udderly🍼 ridiculously MOO-ving already! 🐄 Not pictured: my pumping breaks 🙃 (shout out to @csiriano for the incredible custom costume 💅🏻✨)

"Mooooo over for this fun custom custom for our love @katyperry! #holycow #okbessie #milfmoney," he wrote.

Mooooo over for this fun custom custom for our love @katyperry! #holycow #okbessie #milfmoney

Though Siriano didn't share any details about the outfit, some people have speculated that he designed Perry's top with detachable fabric that made it easier for her to take pumping breaks. Others asked Siriano to create an entire collection of nursing outfits.

"It looks like you've incorporated breastfeeding/pumping access, which is fabulous to see in a structured gown," one person wrote on Instagram. "Very impressive! I know it's not the easiest design feature."

"Looks like the front of the outfit easily comes down for breastfeeding purpose," another person commented. "You look great mama ❤️."

Representatives for Christian Siriano did not immediately respond to Insider's request for comment.

This isn't the first time Perry has opened up about her experience pumping breast milk for her infant, Daisy Dove Bloom. In August, during the MTV Video Music Awards, Perry celebrated her nomination at home while wearing a nursing bra and postpartum underwear.

Perry also used a VMAs GIF in her photo, and jokingly credited her hair and makeup look to "exhaustion." She tagged the post to let her followers know that her bra was from the breastfeeding product brand Medela, and her underwear was from Frida Mom, which sells postpartum recovery solutions.

She also wore numerous standout maternity looks while pregnant with her child, from colorful dresses to elaborate costumes.