A sign of unity! Prince and Princess of Wales and King and Queen Consort tweet about Kate’s carol concert in their first ever joint social post – on day of Harry and Meghan’s Netflix attack

The King and his eldest son have joined forces to tweet together for the first time, as they celebrated the Princess of Wales’ Christmas carol concert.

The official Twitter accounts of the Royal Family, representing the King and Queen Camilla and of the Prince and Princess of Wales, representing Prince William and Kate Middleton, penned a joined post, which was published on the platform last night.

They shared three pictures of the evening, including a close up shot of the King speaking to a member of the Church, and a picture of William and Kate Middleton arriving with their eldest children, Prince George, nine, and Princess Charlotte, seven. The other showed them sitting front row with the Countess of Wessex.

This show of unity comes as the royal family put on a brave face for the event at Westminster Abbey last night, hours after Netflix released the last three episodes of Prince Harry and Meghan Markle’s explosive Netflix docuseries. 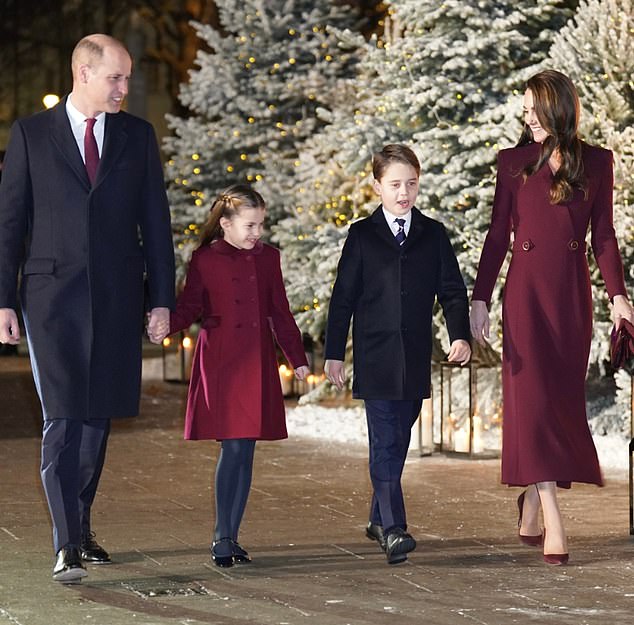 The official Twitter accounts of the Royal Family, representing the King and Queen Camilla and of the Prince and Princess of Wales, representing Prince William and Kate Middleton, penned a joined post, which was published on the platform last night

‘A joyous evening at Westminster Abbey for the #TogetherAtChristmas Carol Service,’ the two accounts jointly tweeted.

They picked some of the best pictures of last night, including the Prince and Princess of Wales beaming with their delighted children on their way to the concert.

Another picture showed the senior members of the royal family sitting together in the front row ahead of the concert.

The King was showed next to the Queen Consort, while Prince George and Princess Charlotte, who looked excited to attend the musical evening, were sat between their parents, with Sophie sat next Kate Middleton. 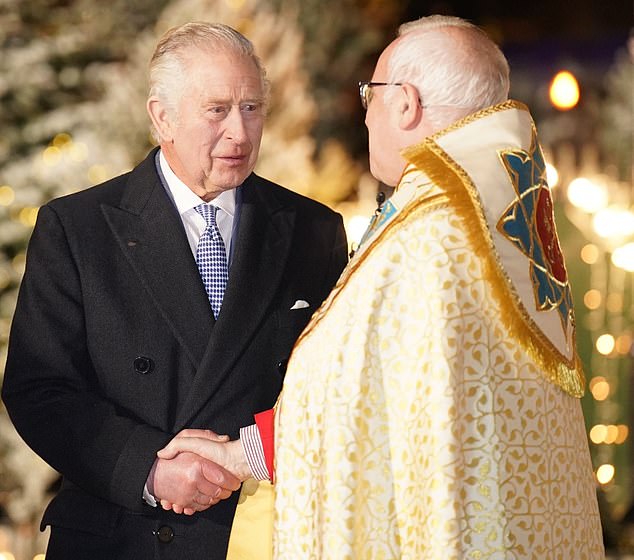 They shared three pictures of the evening, including a close up shot of the King speaking to a member of the Church 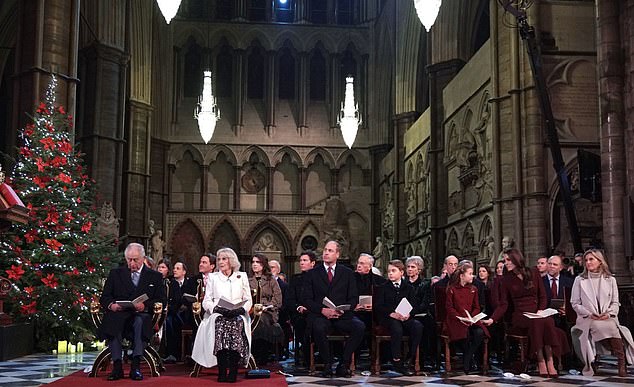 The King was showed next to the Queen Consort, while Prince George and Princess Charlotte, who looked excited to attend the musical evening, were sat between their parents, with Sophie sat next Kate Middleton

Princess Beatrice, Princess Eugenie and their respective husbands were sat in the second row with Mike and Zara Tindall and the Duke and Duchess of Kent.

Another snap was a close up picture of the King as he was welcomed to the Abbey by a member of the Church. The Monarch looked as relaxed and affable as ever ahead of the service.

The event was business as usual for a beaming Kate, who was the first to arrive shortly before 4.20pm. She later re-emerged to walk in her family, placing a supportive hand on Prince George’s back as he entered the service hand-in-hand with his sister Princess Charlotte and father the Prince of Wales – while crowds shouted: ‘Kate and William we love you!’. 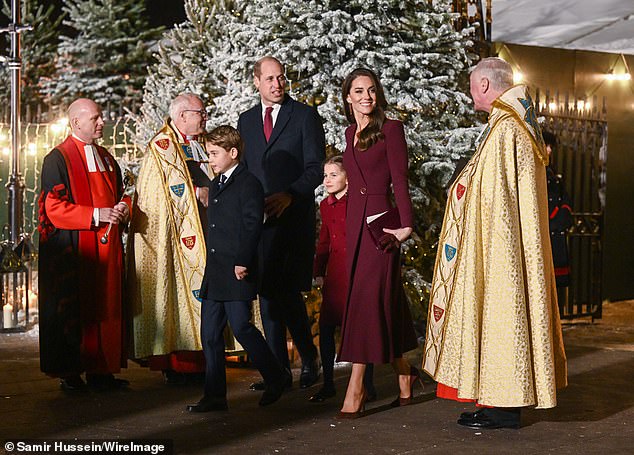 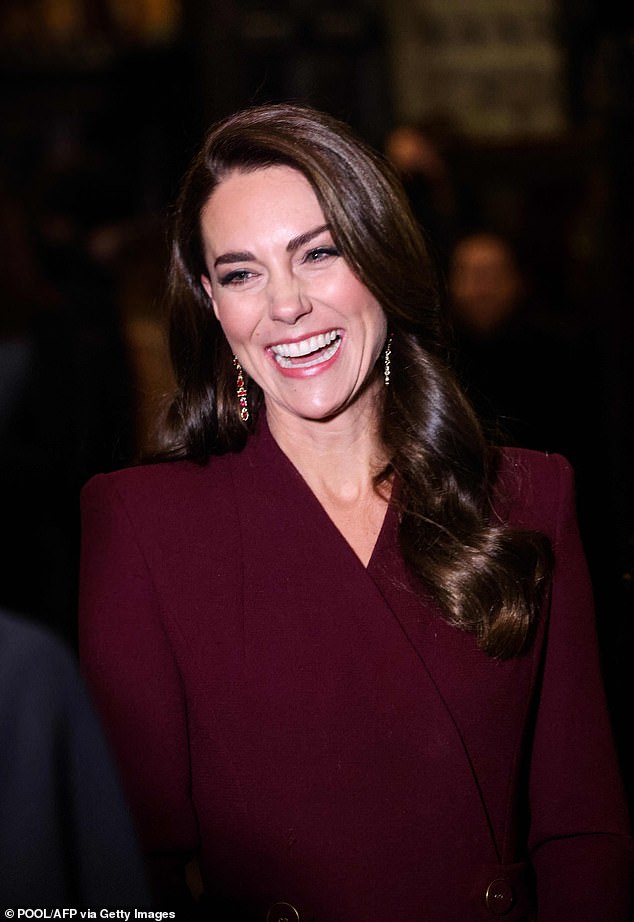 Beaming: The Princess of Wales smiled at she was snapped at the Christmas carol event this evening, during which she joked about her bad singing with guests

King Charles and his wife Camilla swiftly followed, with the monarch seemingly unfazed by the attacks launched at The Firm by the Sussexes earlier that morning – as he smiled and chatted with clergymen before taking his seat inside the chapel.

The King, Queen Consort, Prince of Wales, Prince George, Princess Charlotte, Princess of Wales and Countess of Wessex were pictured front and centre at the concert, holding candles while singing from the same hymn sheet – a defiant message in the face of Harry and Meghan’s fresh accusations, which had been streamed to billions of potential viewers across the world at 8am on Thursday.

Sophie, the Countess of Wessex, arrived not long after Kate, as did Princess Eugenie and Beatrice, who were with their husbands. Eugenie was seen in the sixth episode of Harry and Meghan’s Netflix series today, visiting the family at their home in Montecito, California.

Also present was Prince Michael of Kent and his wife Princess Michael. The latter hit the headlines last week when Netflix revisited the moment she wore a Blackamoor brooch to a Christmas lunch that was attended by Meghan in 2017. 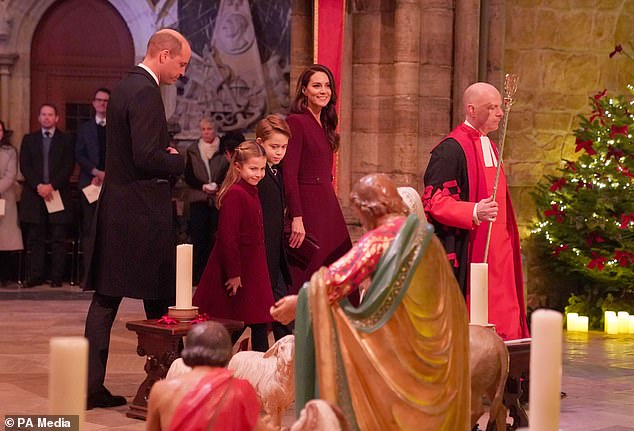 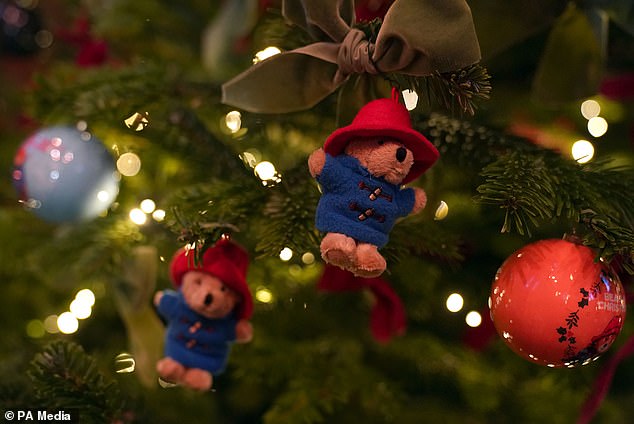 Tribute: Paddington Bear ornaments were snapped on a Christmas tree, likely in tribute to the late Queen (Kirsty O´Connor/PA)

Hours earlier, the Duke and Duchess of Sussex ramped up their war with the Royal Family and the British media, firing a slew of extraordinary claims back to the UK.

But Kate was radiant as she donned a festive burgundy coat dress from London-based Eponine, paired with £14 drop ruby earrings from high street retailer Accessorize, a matching shimmering clutch and gloves, and burgundy heels.

In perfect coordination, Charlotte, seven, wore a £160 burgundy coast from Trotters Heritage, while William donned a shade of navy paired with a matching men’s dress coat and a tie in burgundy.

Kate greeted clergy at the door of the abbey before going inside where she chatted with guests and enthusiastically high-fived children.

Kate met and thanked those taking part in the service, including Paddington star Hugh Bonneville and singer Melanie C.

She also chatted with Princesses Eugenie and Beatrice before coming back out to welcome her husband and two children, who arrived before 5pm.

It was then that cheers erupted from members of the public alongside shouts of, ‘Kate, we love you’ and ‘Prince William, we love you’.

Laughing and joking with the guests, Kate was also heard telling singer Alfie Boe about her own musical skills, saying she needed more practice singing.

‘On the piano you can slightly hide away a bit more than you can do singing,’ she said.

‘Actually my children probably wouldn’t forgive me – I’m not sure whether they think I’ve got a particularly good singing voice. I’ll have to have some lessons.’

Kate said she knows how busy this time of year is for everyone as she told them she was ‘hugely grateful’ for their participation.

During the service William read an extract from the late Queen’s 2012 Christmas message.

More than 1,800 people were gathering in the abbey for the concert, staged to recognise the ‘selfless efforts of individuals, families and communities across the UK, and celebrate and showcase the joy that human connection and togetherness can bring’.

‘My children probably wouldn’t forgive me’: Princess of Wales jokes about being a bad singer while hosting her Christmas carol concert at Westminster Abbey

Red-y for the festivities! Princess of Wales looks radiant in an Eponine burgundy coat dress and dazzling drop earrings as she shrugs off Netflix drama at her carol service