Fitzroy's Panama Dining Room could have been up and running last week, but it simply wasn't worth it for owner Luke Stepsys.

He will open the doors later this month, but, even then, COVID-19 restrictions on patron numbers mean the 200-capacity converted textile factory will "reopen to a great loss," Mr Stepsys said. 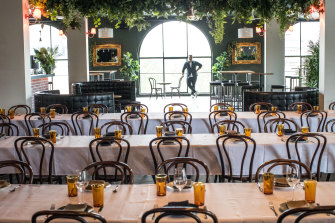 He is among the many Melbourne hospitality operators who want Premier Daniel Andrews to speed up the relaxation of restrictions on Sunday, when he is due to announce the latest version of Victoria's coronavirus rules.

The state recorded a fifth consecutive day of zero new coronavirus cases on Wednesday. Mr Andrews said Victorians, who had "all built this together", could not let their guards down. "If we don’t all value it and play our part," he said, "then this won’t last."

Thousands took to Melbourne beaches on Cup Day, with many openly flouting compulsory mask rules, although police fined just 34 people across Victoria outside of anti-lockdown protests on Tuesday.

The Premier said there was no excuse for not wearing a mask, but conceded it was possible rules could eventually be relaxed so masks were only compulsory in high-risk environments, such as shops and public transport. 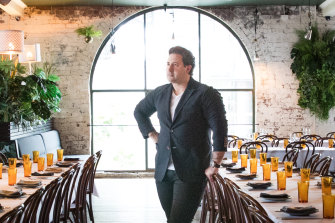 Panama Dining Room is one large 520-square-metre room, licensed to hold 200 guests. Even once Monday's new rules kick in, it will still only be allowed to seat 10 patrons – unless it is carved up into separate spaces using two-metre-high temporary dividers.

"It's just not viable," said Mr Stepsys. "Especially considering most of us in hospitality have lost money for eight months.”

He said he supported the measures Mr Andrews had adopted. "At 700 cases a day, this virus needed to be beaten, and we still need to be cautious. But we can't be the one industry that is thrown to the wolves," he said.

He said bigger venues such as his – "which have great airflow and people can be socially distanced" – could operate safely at half their capacity. "Even at 50 per cent capacity, we are not going to make money," he said.

He wants to see an immediate guest limit of 50 people per space, up to 100 patrons, and then, if unknown community transmission remains at zero, 50 per cent capacity allowed across venues, followed by a further loosening of rules.

David Canny owns the Red Lion Hotel in Ballarat and the Montague Hotel in South Melbourne. He is also Victorian president of the Australian Hotels Association, which argues the state should move to a one-person-per-four-square-metres rule.

"The limit would then be done on the size of your property," Mr Canny said. "At the moment you've got some massive footprint hotels and they've only got two rooms so they can only get 20 people in."

He pointed to NSW and Queensland, which both had one person per two square metres of space, as the direction in which Victoria should head.

Opposition Leader Michael O’Brien on Wednesday called on the government to allow venue capacity limits to be dictated by their size.

"Why is it that a tiny little cafe can have 10 people inside, but an enormous venue like this that can seat 200 is allowed to have 10 people in a room?" he said, speaking from The Gables, an event centre in his electorate of Malvern.

The state government will also roll out its pilot QR code check-in system at 100 businesses in a fortnight.

The Age last week reported Victoria was developing its own system to operate within the state's existing digitised contact tracing software developed by US tech firm Salesforce.

The Department of Jobs has put a call out for 100 businesses, from a range of sectors that do not currently use QR code technology, to take part in a pilot program to start in two weeks.

Businesses, including hospitality and beauty services, are currently required to take the details of any person who visits the premises for more than 15 minutes.

NSW is finalising its plan to mandate QR check-in codes at hospitality venues for the summer, which Premier Gladys Berejiklian said was needed to combat complacency in businesses, which have been open since May.

While no new outbreaks have occurred in Victoria since hospitality reopened last week, the need for a QR code system came into focus amid concerns some venues were not recording customer details, which is compulsory, either by hand or their own QR tool.

Mr Andrews has previously backed pen and paper for contact tracing and said many businesses would take "pride" in using traditional methods.

Get our Coronavirus Update newsletter for the day’s crucial developments at a glance, the numbers you need to know and what our readers are saying. Sign up to The Sydney Morning Herald’s newsletter here and The Age’s here.

Which? reveals the formula for the perfect cheeseboard