Former foreign minister Julie Bishop has urged Australia and France to fully disclose what they told each other about the dumped submarine contract, saying Canberra’s diplomacy had been “missing in action”.

Ms Bishop said Australia “really alienated a very strong partner and friend in France” and it needed to be doing everything in its power to repair the relationship. 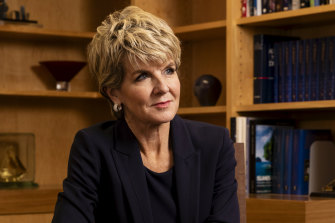 The Morrison government has maintained it didn’t do anything wrong in the way it blindsided the French government in cancelling a $90 billion deal to build conventionally powered submarines and instead use American and British technology to develop a nuclear-powered fleet of submarines under the AUKUS defence pact.

Emmanuel Macron accused Prime Minister Scott Morrison of lying to him, with the Australian government responding by leaking a text message from the French president.

“The manner in which it came about is now rather unfortunate because it appears we have really alienated a very strong partner and friend in France,” Ms Bishop told her former colleague Christopher Pyne on his podcast Pyne Time.

“I’m quite distressed about it because diplomacy seems to be missing in action.

“Australia is renowned for its diplomacy. We, I believe, conduct ourselves exceedingly well on the world stage and we have a very keen eye to maintaining relationships.

“In this instance, I am quite distressed that France feels it can’t trust Australia, and President Macron has said some very harsh things about the Prime Minister.”

Ms Bishop said the “tit-for-tat” between the two countries was now becoming “most challenging and I think the only way to clear the air is for the Australian and French officials to give full disclosure”.

She said both countries needed to outline the “timeline of who was told what and when”.

“But I suspect that Australia did keep the AUKUS announcement from France, in fact I’m sure they did, but the question on how we reneged on the submarine contract is unfortunate,” she said.

“It was a massive contract for France… it meant a great for them and their capability.

“And let’s face it, we were the ones who said that we couldn’t take nuclear-powered submarines.”

She said it was important to remember that France was forced to retrofit its nuclear-powered submarines into diesel-electric at the request of Australia.

“If you put yourself in Macron’s shoes, he might well be entitled to say: ‘Fine, if the diesel subs were no longer fit-for-purpose, why not ask us to tender on nuclear subs because France has them?’”

“I think the decision to have nuclear-powered submarines is the right decision, it’s just how it came about.

“The other thing is: I don’t think we need to double-down against the French. I think we should be working overtime to repair the relationship and rebuild the trust that they clearly think has gone missing.”

She said the AUKUS agreement does “make sense” given the deep relationships Australia has with both Britain and the United States.

“I have always supported the idea of forming as many alliances and partnerships and close relationships as make sense for Australia, and clearly we already have a close relationship with the United States,” she said. “It’s the cornerstone of our foreign policy. They are not only our largest foreign investor, but they are our major defence-strategic intelligence ally.”

“The UK relationship is on a very positive trajectory post-BREXIT.”