Home » Lifestyle » JAN MOIR: No conman is worth your tears, Carolyn

JAN MOIR: Burn that wedding dress! No conman is worth your tears, Carolyn 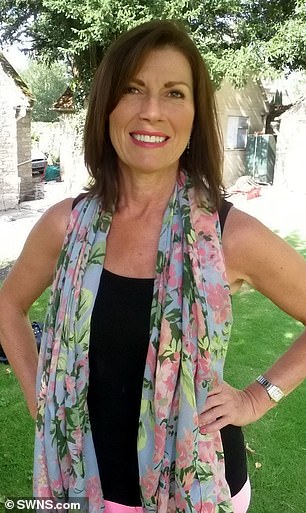 Carolyn didn’t ask too many questions. If it seemed too good to be true, that is because it was. For Mark was not the Prince Charming of her dreams

She is the woman who was fleeced of more than £800,000 by her supposed boyfriend; a bad hat and serial conman called Mark Acklom.

Pretending to be a millionaire Swiss banker who was also an MI6 agent (ahem!), he promised to marry Ms Woods after a whirlwind romance, but defrauded her of her life savings and fled the country instead.

He has now been condemned to nearly six years in jail, whereas her sentence has no end.

For people will be forever saying to her: Carolyn, didn’t you see the signs? Carolyn, how could you not have guessed?

Carolyn, he pretended to have a brain tumour, he claimed having a heart attack was ‘fun’, and said he could shut down the entire UK economy with one phone call.

He also explained his frequent absences by saying he had been called away on dangerous espionage missions, often in Syria.

For God’s sake, Carolyn, they will clamour, how could you be so stupid? 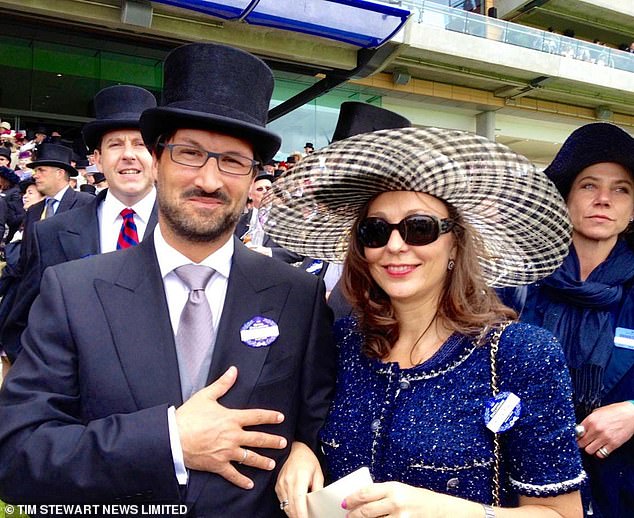 Mark Acklom, above, was a career criminal and a psychopathic liar; a man who had been in and out of jail on fraud charges all his life, someone who was already married with two children. Acklom is pictured with his wife Maria Yolanda Ros Rodriguez at Ascot’s Royal Enclosure

Well, I think I know exactly how. At the time they met in 2012, Carolyn was an attractive 54-year-old divorcee starting a new life in the Cotswolds.

She had money in the bank and two grown-up daughters but she didn’t have a man in her life.

Being lonely can make a woman vulnerable, especially when someone like Acklom bowls into her life. 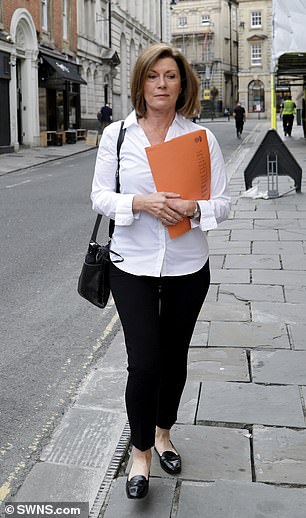 He was handsome, two decades younger and presented himself as a rich James Bond-a-like who had fallen for her hook, line and stinker.

Like Tinkerbell, he existed because she believed in him.

And when he needed money because of ‘cashflow problems’ she believed in that, too.

In the end, she was left with nothing but the wedding dress he bought her. She had even cashed in her pension.

Yet she was a victim of his cruelty, not of her own lack of guile. Habitual swindlers like Acklom home in on emotions, not intelligence.

Even smart people can fall for elaborate deceptions such as his because the most successful con artists thrive in a realm beyond logic. They identify desire, then pretend to supply what the heart most wants.

He took Carolyn on shopping trips to Harrods, installed her in a fancy home, told her he’d never felt this way before.

Carolyn didn’t ask too many questions. If it seemed too good to be true, that is because it was.

For Mark was not the Prince Charming of her dreams. He was a career criminal and a psychopathic liar; a man who had been in and out of jail on fraud charges all his life, someone who was already married with two children.

To add insult to injury, he even used some of Carolyn’s money to pay their school fees. That detail would have killed me.

I’m not surprised she felt suicidal when the extent of his deceit was revealed. 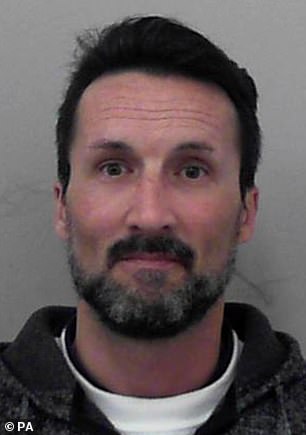 Even smart people can fall for elaborate deceptions such as his because the most successful con artists thrive in a realm beyond logic. They identify desire, then pretend to supply what the heart most wants. Mark Acklom is pictured above

Yet she has nothing to be ashamed of. I don’t know Carolyn but I certainly know lots of older women like her; golden girls who are good-looking, single and with so much to offer.

Practical, smart women who can run a business, make a perfect dinner, keep a wonderful home, know how to grow roses, paint a room, manage a portfolio.

You meet them and think, why on earth aren’t men queueing up to take them out, cherish and love them?

Because they are too busy queueing up farther down Peachy Bottom Lane, where all younger women live, that’s why.

For me, that was the loose thread that would have instantly unravelled this sick tapestry of lies.

For if super-spy millionaire international man of mystery Mark Acklom were real, he would have been with a 24-year-old, not a 54-year-old.

Which is a sad (but true) reflection on men in general, not women in particular. It has taken six years to bring Acklom to justice.

In court he changed his plea to guilty at the last moment, admitting five charges of fraud that amounted to £300,000 of Ms Woods’s money.

Prosecutors will try to recover some of her cash. Good luck with that.

In the meantime, Carolyn Woods must try to piece her life back together. She has been brave in helping the police track down Acklom and bringing him to justice.

Let’s hope that for her there is some salvation in this public mortification and that Hollywood buys the rights to her story soon.

In the short term, she has to get on with the rest of her life. Perhaps she should start by burning that wedding dress, putting on some lipstick and pulling herself together. And beware of unlikely strangers bearing gifts.

The 28-year-old singer wore a tiny black number, with a top that looked like two black triangles straining to tether a pair of weather balloons

Terrible news for those of us whose best beach look ranges between ‘must she?’ and ‘don’t look now’ on the arrestable offence spectrum. The underboob bikini is here.

Rita Ora was spotted in one while sailing off Ibiza this week.

The 28-year-old singer wore a tiny black number, with a top that looked like two black triangles straining to tether a pair of weather balloons.

Who is to blame for this horrible trend?

First out of the traps were several female contestants on this year’s Love Island (ITV2), whose brazen displays of underboobage did not go unnoticed.

Isn’t there something of a kitchen calamity about this look, with two soup plates slipping out of the drying rack?

Yet underboobs are becoming a thing.

One girl I saw had a solar system inked under her left boob, while another boasted ‘The Sun Will Rise’.

It might for the moment, young ladies. But be prepared for the land of eternal shadow when age and gravity take their toll.

Oh dear. My friend Gwyneth Paltrow is simply steaming over suggestions that she does not cook.

As she publicised her latest recipe book, The Clean Plate, she tore into a critic who innocently asked if she really did cook.

Why not? After all, it is only what the public have grown used to.

Gordon Ramsay and Jamie Oliver don’t cook in the restaurants that bear their names; actress Keira Knightley appears in films without ever acting in a convincing manner, while Jeremy Corbyn is leader of the Labour Party without ever seeming to lead.

It wasn’t so long ago Gwyneth’s lifestyle company, Goop, had to pay a £115,000 fine for making health claims about vaginal jade eggs.

And just this week doctors in Canada had to treat a woman for painful burns after she overcooked herself following the Paltrow-approved process of vaginal steaming (this ancient practice involves women crouching over a pot of bubbling water enriched with herbs for about 30 minutes — roughly the time it takes to steam a small fruit pudding).

Gwynnie says it’s good for you, although most health professionals disapprove. What I’m saying is that if she wants to stay my friend, Gwyneth Paltrow is going to have to realise that it is wrong to assume she is always right.

Who says romance is dead? 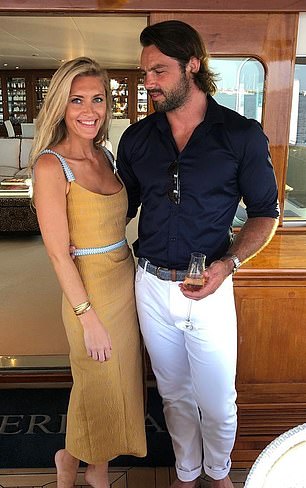 ‘I met a girl who seriously swept me off my feet and in a time of hardship showed me love, a deep devoted love,’ burbled the idiot new groom on his Instagram account this week

There is a special place in hell for men who cheat on pregnant wives, but Ben Foden seems to have evaded it so far.

The rugby international’s marriage to pop star Una Healey ended after he admitted to being unfaithful when she was expecting their second child.

She remains in Ireland with their young children, while he has moved to New York and married American Jackie Belanoff after a two-week romance.

‘I met a girl who seriously swept me off my feet and in a time of hardship showed me love, a deep devoted love,’ burbled the idiot new groom on his Instagram account this week.

Ben, is there any other kind of love? One supposes there must be, given his track record.

His new bride is a beautiful businesswoman who sells a range of organic yoga perfumes called The Goddess Line.

‘Good things happen to those who hustle,’ she recently claimed. And they say romance is dead!

Is travelling anywhere worth it any more? The crowded airports, the insect bites, the collapsing pound, the utter horror of other people?

All to get to jam-packed resorts where roaring mobs with selfie sticks clog the streets.

It really does seem like the worst summer ever for flying, with British Airways on strike and assorted technical glitches causing mayhem.

Meanwhile, Heathrow staff are threatening to walk out, while easyJet and Ryanair have their problems, too.

I share the pain of families caught up in this chaos. Three weeks ago, my BA flight to New York was cancelled after a four-hour delay. There was a problem with a door.

‘We know you will be pleased we put your safety first,’ a BA operative announced over the Tannoy, as we all seethed.

We were bussed to a cheerless nearby hotel for a grisly free dinner of plastic ham, tilapia in a cream sauce and tap water.

I got to NYC the following day and have applied to BA for the €600 compensation to which I am entitled. Three weeks later and I have heard nothing.

Let me know if you are in the same boat.

The Rolling Stones are out on the road again. I know why they do it (££££) — but why do the fans bother?

Hundreds of pounds for a stadium ticket where the band are just tiny blobs, jumping around like matchstick men. Or not, if you are rooted to the spot like Keith Richards.

Despite this, the shows are a sell-out. Is it that simply being in the presence of Mick Jagger acts like a kind of tonic for the troops, a Viagra for the soul for elderly gents?

What else can it be? Concert tours these days are less about the music, and more about the therapy of nostalgia.