Home » Lifestyle » It’s The Passion, except it’s set in rainy Ireland with a sense of humour

Redemption of a Rogue

Written and directed by Philip Doherty

Philip Doherty is an Irish playwright with more than 50 plays to his name. He runs a theatre company in Galway but his spiritual home is Cavan, a county that Irish people make jokes about – allegedly because its inhabitants are famously stingy.

Q: Where does a Cavan man take his children on Christmas Eve?

A: To Santa’s grave.

Doherty sets his debut feature in a village in Cavan. The place lives up to its reputation. It’s a comedy, sort of, about a broken man who comes home to see his dying father after seven years wandering in the wilderness of booze, women and pills. 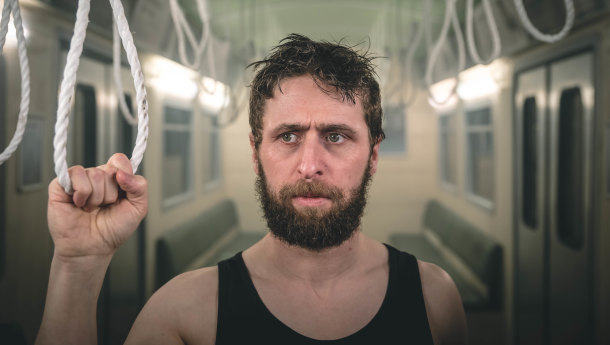 The subject of a bitter joke in his father’s will: Aaron Monaghan as Jimmy Cullen in Redemption of a Rogue.Credit:Limelight

Jimmy Cullen (Aaron Monaghan) intends to kill himself, so he buys a length of rope from a helpful hardware shop assistant who assures him that the 14mm would be good and strong for such a task. His brother Damien (Kieran Roche) greets him with a headbutt; their father Jimmy snr (Hugh B. O’Brien) tries to choke him from his death bed. It’s a close family.

The father’s will has a bitter joke: they will inherit nothing if they bury him on a rainy day. The skies open as the daddy expires, and it keeps coming. Shooting the film must have been a nightmare – unless it really does rain all the time in Cavan. 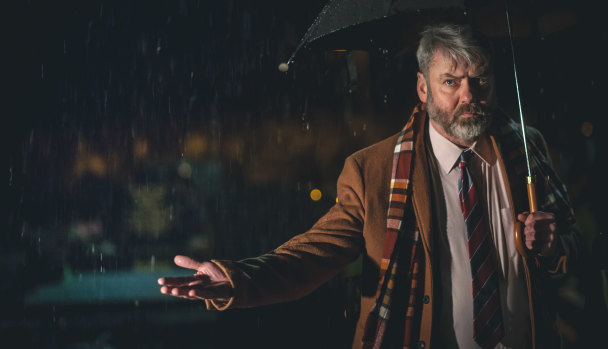 The skies open: Charlie Bonner, who plays loan shark Harry Gilsenan, tries to stay dry in Redemption of a Rogue.Credit:Limelight

The humour is broad, farcical and physical as Jimmy jnr returns to a town where everyone hates him. At the pub, Jimmy meets Masha (Aisling O’Mara) who is both drug dealer and singer in a blues band. She describes herself as “the town slut” but Jimmy refuses her affections. He no longer believes in love.

Jimmy’s initials are the first clue that this is a Biblical story. The coming of the rain is the second. Doherty then takes us through a series of tableau-like scenes in which the bleak nature of Jimmy’s depression meets the cruelty of the crowd – a set of trials, such that we realise this is a loose reworking of The Passion, with only a burnished surface of humour.

That gives the film a sometimes bitter after-taste. Doherty has much to say about Ireland, his playwright’s anger vying for supremacy over his humour.

The film lurches forward in stops and starts, rather than with a smooth narrative flow. Still, there is great commitment and compassion here, a sense of life’s bitter absurdity.

Doherty owes an obvious debt to the Coens, the McDonaghs and the Kaurismakis for the film’s black tone and static compositions. He should now throw that debt in the sea and paddle his own canoe.

He has all the gifts: great dialogue, memorable characters, a dark and personal vision of the world’s shortcomings. Cavan needs a champion.