It’s almost impossible to remember a time before the Johnny Depp and Amber Heard trial was part of our daily news feed. So exhaustive is the media coverage that even those determined to ignore the hype have found themselves sucked into the viral vortex that is Depp v Heard. 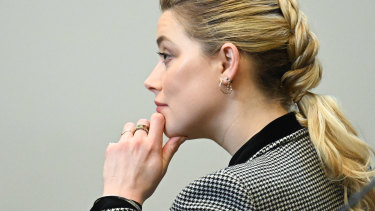 Amber Heard has condemned the social media campaign against her as testimony concludes in the civil trial.

“I did not follow the defamation trial between Johnny Depp and Amber Heard,” writes Amanda Hess in The New York Times. “It followed me.”

Hess has a point: over the past month-and-a-half (shockingly, the trial only began in mid-April), the internet has been force-fed bite-sized clips of court proceedings, typically skewed heavily in Depp’s favour. Heard blows her nose during her testimony, and hours later, a TikTok appears accusing her of snorting cocaine on the stand.

The court of public opinion ruled in Johnny Depp’s favour, and it ruled early, ensuring that Heard was cast as the histrionic accuser and Depp the unsuspecting scoundrel.

Need 21st-century proof that Depp is winning the war? On TikTok, the hashtag #justiceforjohnnydepp has 7.1 billion views, #justiceforamberheard has a lowly 53.1 million.

And it is TikTok (and, to a lesser extent, Instagram and Twitter) that Heard had in her sights when delivering her closing testimony this week. Taking to the stand for the final time, the actress condemned the alleged social media campaign waged against her during the court case.

“The harassment and the humiliation, the campaign against me that’s echoed every single day on social media, and now in front of cameras in the showroom – every single day I have to relive the trauma,” Heard said, fighting back the tears. “Perhaps it’s easy to forget I’m a human being.”

Heard explained that she receives death threats and has been mocked for her testimony about being assaulted, which she described as “agonising” and “painful.”

Depp has denied he ever struck Heard and has maintained Heard was the abuser in the relationship. Heard has testified about more than a dozen separate instances of physical abuse she says she suffered at Depp’s hands. Depp testified Wednesday, calling Heard’s accusations “insane.”

It’s fair to say that the online treatment of Heard has bordered on inhumane. The 36-year-old actress is at best a headline, at worst a punchline.

Heard specifically made a note of the courtroom cameras in her takedown, and there’s no denying the volume of material has been a significant enabler in the meme-ification of the trial.

In America, the trial is airing on Court TV while simultaneously being live-streamed on YouTube, which has undoubtedly helped fuel the internet dumpster fire. Every agonising facial twitch, every sidelong glance, seized upon by bored TikTokers, packaged up and fed into the algorithm.

In her closing, Heard also claimed that Depp had promised to “ruin her”, and that the trial represented an opportunity to take her voice back.

“Johnny promised me he would ruin me. He’d ruin my career and take my life from me. Death was the only way out – and if I got out, this is what he’d do to me. He promised me global humiliation,” she said. “Johnny has taken enough of my voice,” she said. “I have the right to tell my story.”

But as Heard now undoubtedly understands, telling your story is only one part of the process. Once that story is in the public domain, it can be mocked, questioned, and repurposed until all that remains are many TikTok videos featuring the poo emoji and the hashtag #AmberTurd.

Unfortunately, for everyone involved, it seems global humiliation is the one thing all parties will take home from this bruising courtroom battle. Depp’s career was in tatters before the trial, and it seems unlikely to be rehabilitated through this process.

Meanwhile, it’s unlikely Heard will recover from the public evisceration of this trial, at least in the short term. As it stands, a petition titled Remove Amber Heard from Aquaman 2 on Change.org has 4.3 million signatures and counting.

The only thing we can be thankful for at this point is that the trial has finally come to an end. But when you step back from the wreckage, it becomes obvious there are no winners here, not Depp, not heard, not the legal system.

No winners, except maybe the social media platforms who create the content mills we all churn through with little to no care as to the human impact.

Support is available from the National Sexual Assault, Domestic and Family Violence Counselling Service at 1800 RESPECT (1800 737 732).